Periscope is the newest social media kid on the block and bloggers are fast finding ways to use it.  Here's our beginners guide to using Periscope to connect with your readers and help build your blog's community.

Well folks, the time has come to learn about yet another social media platform.

But Periscope actually has a lot to offer to bloggers, so I caved and made an account for research purposes. Here’s what you need to know.

Periscope is an app for iOS and Android devices, which allows users to share or watch live streaming video. These videos are called Scopes.

People can interact with a video by writing messages that you can read and respond to during your broadcast.

People can also send a heart to you if they like the video. The more hearts you get, the more likely you are to be featured in the “Most Loved” feed.

Why Should I Use It?

Periscope isn't a perfect app yet, but you might want to consider getting on board in the early stages. It will probably be a lot easier to get followers now than six months down the road when the app becomes more popular. Not convinced? Here are a few reasons why you should try it out.

Periscope isn’t as sketchy as it sounds

I’m always a bit hesitant to join new social media platforms, because I want to make sure that I’m not joining something that isn’t legit.

Periscope passed the test when I learned that Twitter owns it. Twitter actually bought the initial start-up company early this year and then relaunched the product on March 26, 2015.

Once you install the app on your iOS or Android device, all you have to do is launch it, click the button to sync it with your Twitter account, and BOOM! The app auto fills your name and user info for you, and you’re ready to go.

The app is easy to use (in theory)

Ok, so I haven’t actually used it to broadcast anything yet … but it appears to be easy to use. Let’s take a look at the app, and you’ll see what I mean.

When you launch the app, you'll see the blue sign-in screen, with the Periscope logo. You can either sign in with Twitter or with a phone number.

Below that you’ll see recent scopes from the past 24 hours, or featured scopes.

On the bottom of your screen you'll notice four icons. These are the icons you use to navigate the app. So right now we’re on the home page, which is found when you press the TV icon.

Let’s move on to the Globe icon. When you click this, it takes you to a page with two options: Map and List. These sections allow you to find live broadcasts from all over the world. The map is really cool because it shows you where people are broadcasting from. The List button shows the most popular broadcasts that are currently live. 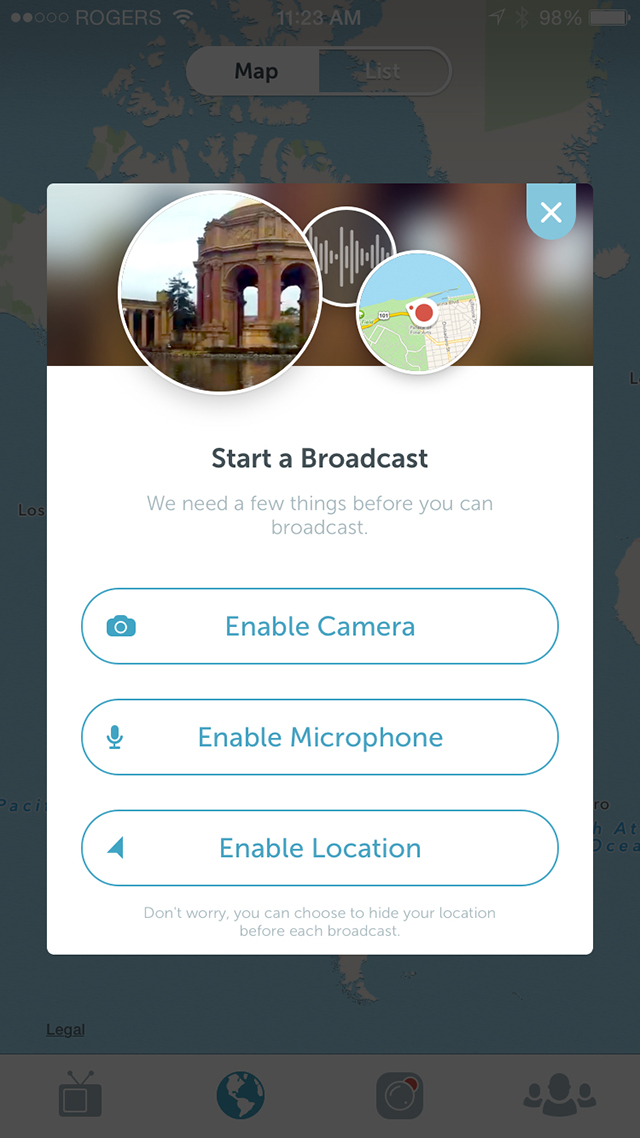 The third icon is a little camera lense. This is where you go to create your own Scope. When you begin, you need to enable the camera, microphone and location for your video (you can hide the location before each broadcast if you like).

Once you’ve done that, you'll see a screen that asks, “what are you seeing now?” This is where you fill out a short description of what your video will be about. On this screen you can also choose to make a broadcast private, by choosing to share it with specific people who are following you. There is also an on-and-off toggle for the chat feature, and an option to share your scope on Twitter.

RELATED:  Tips to Organize and Protect Your Blog Content on Your Computer

Once that’s all set up, you just press the Start Broadcast button, and start talking or showing off where you are. 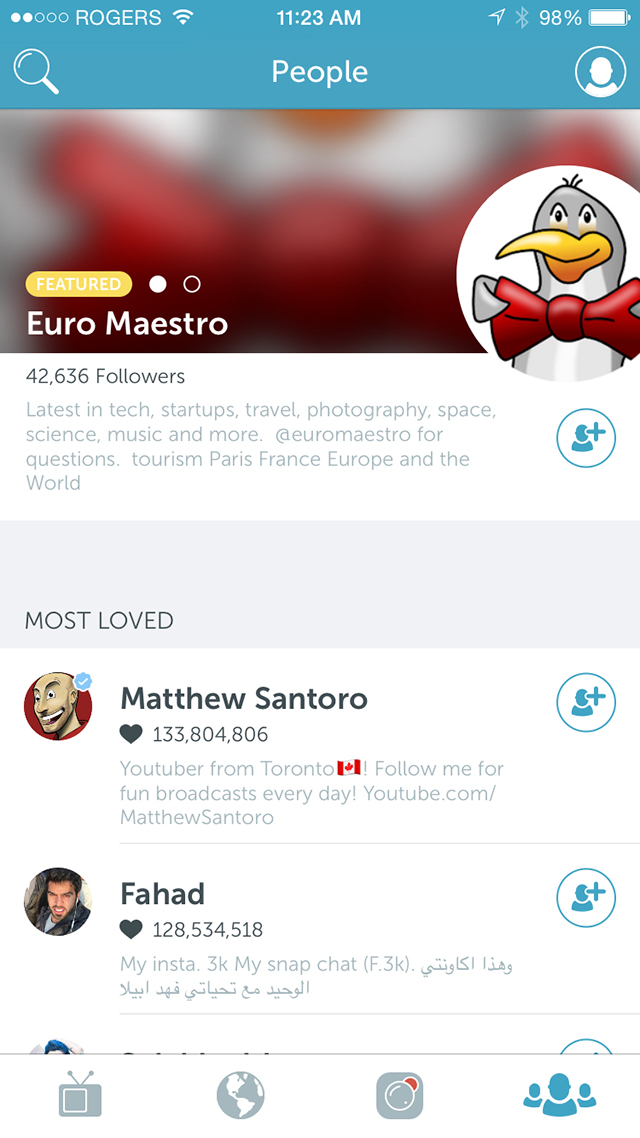 The last icon is for the People screen. This is where you find featured popular Periscope users (those who are Most Loved), or people whom you follow on Twitter who currently use Periscope. It took a while for the Twitter list to populate after I signed up for the service.

The very last section that you need to know about is a bit hidden. On the people screen, you'll see a little person icon in the top right corner. If you click on that icon, you'll see the settings page. There aren’t many options here, but if you’re interested in automatically saving your broadcasts to your devices camera roll, you need to turn that option on here.

What Should I Use Periscope For? 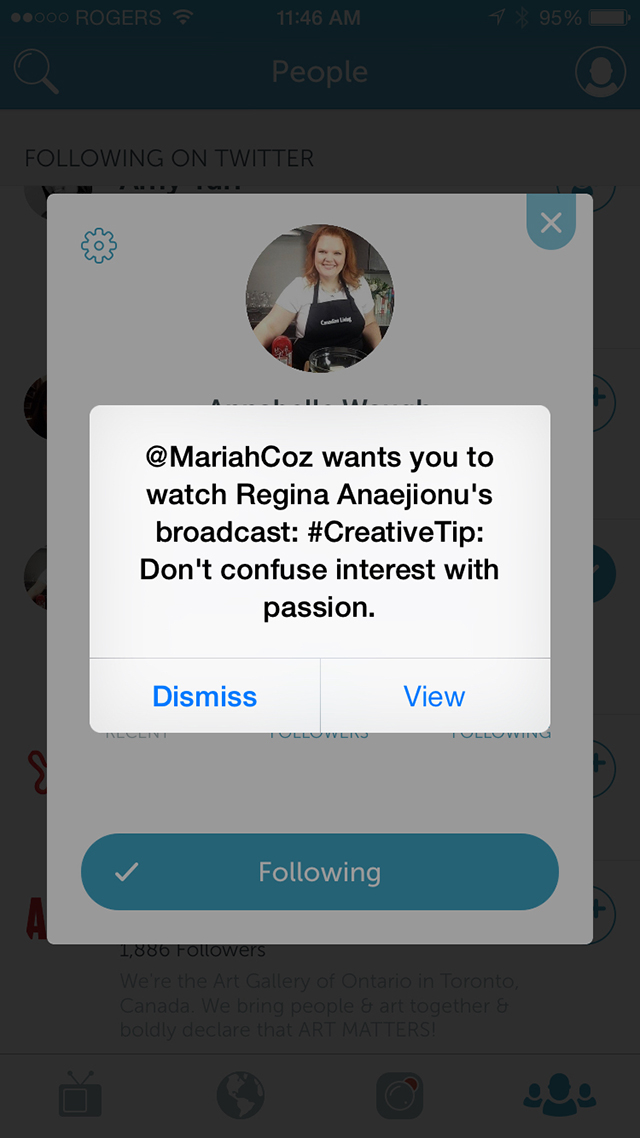 So far I’ve seen scopes where people share business advice, ramble about their problems, and drive to their nail appointment … but that doesn’t mean you have to do that. Instead, you could try:

Be creative, and you might just become a pioneer on this new platform!

As with all social media platforms, Periscope requires some common sense. For example, there have been issues with people live streaming films and televised events on the app. This is considered to be video piracy, and it can get you into hot water!

Another (possibly less obvious) issue is considering your surroundings. When you’re filming, make sure that you’re not getting anyone’s children in your shot. As much as that might be impossible in a public setting, you are supposed to get permission from the child’s parent before filming them.

Actually, you really should be getting permission from ANYONE who ends up in your broadcast. I worked in television for a while, and one of my jobs was to hand out release forms to people in restaurants who were sitting in our shot. They had to give me written permission to allow the videographer to tape them. I’m not 100 percent sure what the rules are for live broadcasts, but when in doubt, err on the side of caution.

This also goes for people’s property. If you’re at a live event, make sure that you’re allowed to film there! Generally, you’re probably fine, but there are some instances where you cannot film on private property. Again, when in doubt, ask.

So, will you be creating a Periscope account? Do you already have an account? Let me know in the comments! I’m @InSearchOfYummy if you want to follow me (not that I’m doing much on there…) and you can also follow FBC (@foodbloggersca).

A Guide to Using Periscope For Bloggers was written by regular FBC Contributor, Shareba Abdul. Shareba is a food blogger and freelance writer. She holds an Honours Bachelor of Applied Arts in Media Studies, a Diploma in Journalism, and has a passion for writing, photography, and blogging. You can check out her yummy discoveries at InSearchOfYummyness.com or connect with her on Facebook, Pinterest, Twitter and Google+.

I signed up a minute ago. I had the app on my phone for a while, just haven’t gotten around to checking it out. I’m glad I did.

You can find me at: @Jason_Sandeman

Thanks for the auto saving tip, I heard nightmare stories of people who didn’t know about it and lost broadcasts.

Oh my, this is the second post about Periscope that come through my inbox today. I guess this is a sign? I’ve been so hesitant with new social media (I got snapchat but never posted yet). I can totally see how Periscope could be awesome for food/recipe bloggers. Maybe I’ll just have to take the plunge

Thank you for this great article! I’ve been tinkering around with the idea of using Periscope but wasn’t sure where to start. This has been very informative!

I’m glad that you found it helpful Trudy!

Thanks! This was very helpful! Just signed up as @sweetopia

I’ve just signed up as well. It’s much more user-friendly than snapchat. It also seems like a nice place to leave foodie hints and tips, as well as mini videos while cooking! Follow me at @KateVeggieDesserts

I could not get my head around snapchat! Periscope just seems so much easier to use. I’m following you now 🙂