Tax Time: What Counts As Income For Your Food Blog?

CPA and blogger Angela Williams brings us another instalment in her series on accounting for food bloggers. Tracking income and expenses, knowing what to expense and when, doing your taxes … they can all send shivers down the spine of even the most experienced cook or restaurant reviewer.  Today we cover what counts as income for your food blog. 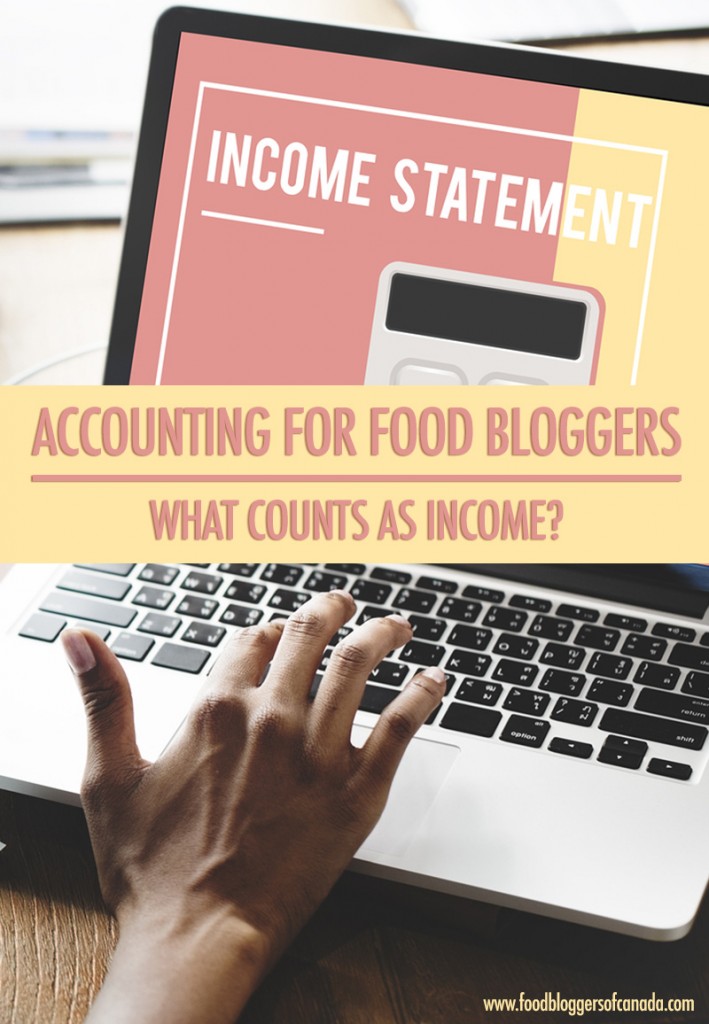 Let’s be real, blogging income is great! As a blogger or freelancer, it’s what keeps your business afloat; however, when it comes to taxes, it might may mean you owe the tax people a bill at the end of the year.

That part? Maybe not so fun.

What Counts as Blog Income?

Per the Canada Revenue Agency (CRA) pretty much any payment you receive as a result of your blog or business needs to be included in income.

Yes, this means a payment as small as a dollar from a company should be included in income. (Note that there are some exceptions to this, which I’ll cover a bit later on in this post).

The markup on products can vary, but what should generally be included as the amount in income is the cost to the provider (the amount they would expense) or the value of the service you provide (what you would invoice if goods weren’t received). In the case where both goods and cash are received, both of these amounts should be included in income.

It’s not uncommon for a company to provide a discount to a blogger as part of being an ambassador, or representative of the company. Things such as discounts are not required to be included in income, as you’re not receiving any product for free. While you may receive an attractive discount, at the end of the day, you’re required to provide payment to these companies in order to receive your goods.

Referral codes are also quite popular; you know, where you give someone a discount and you also receive a discount off your order. Good news: like receiving a discount for being an ambassador, you don’t need to include any referral discounts in your income, since you need to spend money in order to take advantage.

To simplify things a bit, if you have to spend your (after tax) money in order to take advantage of a discount or a credit, it’s not considered income so you don’t need to worry about it for the purposes of taxes. The Ebates program is also similar to a discount in that you receive a payment after spending your (after tax) money on a purchase; as such, you wouldn’t need to include those amounts in your income.

Finally, we have affiliate income. Most commonly, you’ll see this coming from Amazon whereby you link to a product on your site and if someone clicks on the link and purchases something from Amazon, you receive a payment. This payment is easiest considered to be a commission, so yes, income earned as an Amazon affiliate (or through other affiliate networks) would need to be included as income on your tax return.

The majority of ad networks that partner with bloggers are either US-based, or make payments in US dollar (USD) amounts. This can sound tricky when determining what, and how, to record these amounts. The good news is it’s not as difficult as it may seem.

Any amounts received in US funds (or any non-Canadian currency) are reported on your taxes in Canadian dollars. Use the Bank of Canada exchange rate in effect on the date you receive payment, or, you can use the average annual rate for payments paid multiple times per year.

What You Don’t Need to Include in Income

In Canada, we aren’t required to include items that are considered to be gifts in income; this is why lottery winnings aren’t taxable in Canada.

This means there are certain situations where you won’t be required to include amounts in income. The most common items likely be considered a gift include items won as part of a giveaway (including cash) and swag bags received from companies for promotional purposes.

Accounting for Food Bloggers is written by Angela Williams, a CPA CA registered in the province of Alberta. During the day, Angela works for an oil and gas company in Calgary and in the evenings you can find her running the river pathways or relaxing with her two cats, Merlin and Charlie. Angela also writes and manages two blogs, Cowgirl Runs and Accounting for Bloggers. You can find her on social media as well, at Instagram, Twitter here and here, and Facebook here and here.

SUBSCRIBE TO GET YOUR FREE SPICE BOX EBOOK
You are subscribing to the FBC Food Lovers Newsletter.
You can unsubscribe any time!
Click Me
40shares

Great post! I’m all for declaring products if I ask for them, but what if companies keep sending you stuff you didn’t ask for and will not use?

Hi Eve,
This is a situation where you need to evaluate if there truly is an exchange of service. Products deemed to be promotional in nature likely wouldn’t need to be declared, so if you do not have an arrangement to provide the company with something in return (ie. a post, or social media, etc) and packages just show up at your doorstep, then it’s highly unlikely you would then need to declare this as income.

What an useful and helpful post, I am so thankful FBC!!

Glad you found it helpful Julia!