Each month FBC member and nutritionist, Sondi Bruner, takes a favourite recipe and shows you how to adapt it to be allergen-friendly, as well as delicious and healthy. This month she’s got tips for gluten free and vegan pie crusts just in time for the upcoming holiday season. 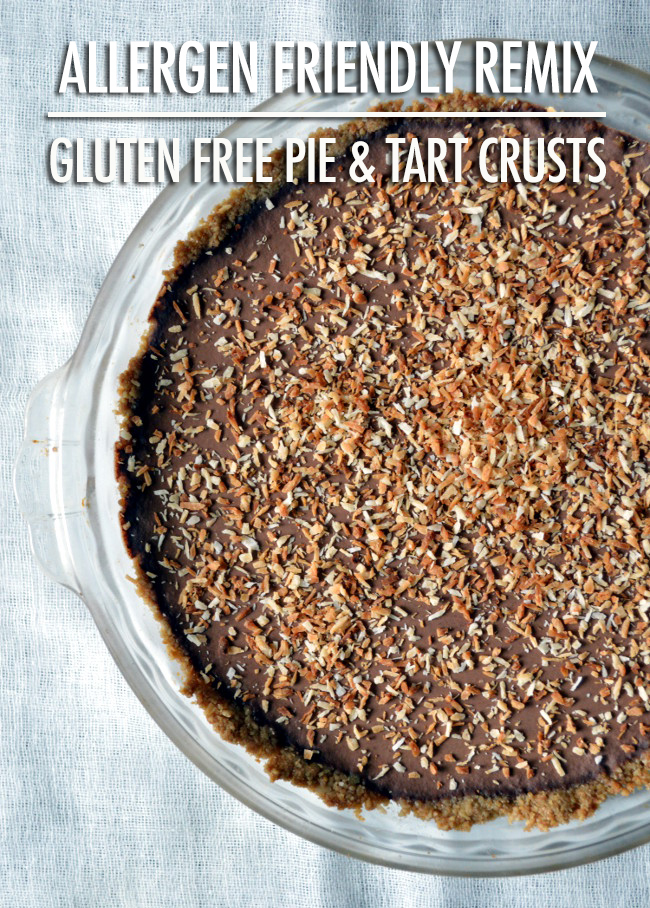 I've been blogging for nearly six years, and on my website you'll find a whopping zero recipes for pies and two for tarts. I have very strong feelings about pies and tarts (read: I don't like them), and would never choose a slice if I have the option of eating a chocolate bar, cookie, muffin, ice cream, brownie, slice of cake, dairy-free milkshake, or a pile of dirt instead. Mainly, I eschew the pie/tart family because they often feature fruits. I'm not a fan of fruity desserts; I much prefer to eat fruit on its own.

When the FBC team requested an allergen-friendly remix column about pies and tarts, I accepted the challenge with a mixture of excitement and stomach-seizing trepidation. As many of you know, I have a rather unscientific approach to baking in that I tend to throw ingredients into a bowl, troubleshoot by adding a pinch of this or that, then nudge the batter into the oven and expect that everything will work out deliciously in the end. The majority of the time, I'm not disappointed.

So did this combination of fearless experimentation and hope work in the case of tarts and pies? Yes, and also no.

The Making of a Gluten-Free and Vegan Tart

Pies and tarts without gluten, dairy or eggs are a tricky part of the alternative baking realm. Without the binding, sticky qualities of gluten and eggs, it can be much more difficult to bring everything together. In other kinds of baked goods like cookies, muffins, cupcakes or loaves, there are more options you can use to bind such as flax, chia, applesauce, bananas and tofu. Also, you don't need to roll out muffin or cookie dough — you can just plop the mixture on a baking sheet or in a tin and you're off.

I decided to attempt an easy tart crust that you could simply press into the pie plate, eliminating the struggle of rolling it out (press-in crusts are also a timesaver!). I had a strong hunch that adapting this simple recipe for sunflower double chocolate chip cookies would yield an incredibly versatile pie crust, and I was totally right.

By swapping the typical glutenous flour for sunflower seed meal, this crust is not only gluten-free but grain-free and nut-free as well, making it a good choice for Paleo and autoimmune-style diets. If nut allergies aren't an issue in your home, you could also make this crust with almonds, pecans or walnuts, too.

Instead of butter or margarine, I used my ultimate favourite saturated fat: coconut oil. This lends moisture and helps to bring the crust together, just as if you were using dairy-based butter.

The lovely part about this crust is that it isn't very sweet. If you omit the cinnamon and vanilla, it could easily become the vessel for savory dishes like quiche or pot pie.

When it came time to fill the tart, I thought, 'Why does this filling need to be fruity? It's my recipe and I'll make what I like.' Instead of fruit, I created the most luxurious dairy-free, vegan chocolate mousse. You may want to double the batch so there's enough to go on the crust, too, as your mouth will intercept a few spoonfuls. (I made the filling several times, you know, juuuust to be sure it was good.)

Of course, if you have a favourite tart or pie filling, feel free to pour it on in here instead.

The Making of a Gluten-Free and Vegan Pie

It's not just that I don't have a pie recipe on my blog, I've never even made a pie at all, gluten-free or glutenous. I'm simply too lazy to make a dessert that involves using a rolling pin.

After glancing at a couple of gluten-free and vegan pie recipes on the internet, I figured I had it all in the bag. I mean, I scored big my first time around, so why not the second? My pie crust, surprisingly, rolled quite well, and the filling was tasty. But when I took the pie out of the oven, I had a feeling it wouldn't taste great.

I didn't like it at all. I don't know much about pie, but I do know that pie crust shouldn't be tasteless and rock hard and make you wonder if you'll need to visit the dentist to fix a cracked tooth. My husband is a pie-lover and basically my complete dessert opposite. When I gave him a slice he said, 'It tastes like apple pie!' and ate several pieces.

After some further internet probing (there's a good tutorial on Food 52), I realized I had made some crucial pie mistakes. On my second attempt, I added more fat, less water, and let the crust rest to distribute the moisture. The result? A flaky, tasty crust; it almost had a shortbread quality to it. I even ate a slice of pie! After a side-by-side comparison, my husband revised his opinion and said the second was far and above the best, particularly in regards to the tastiness of the crust.

I think the keys to my success were: 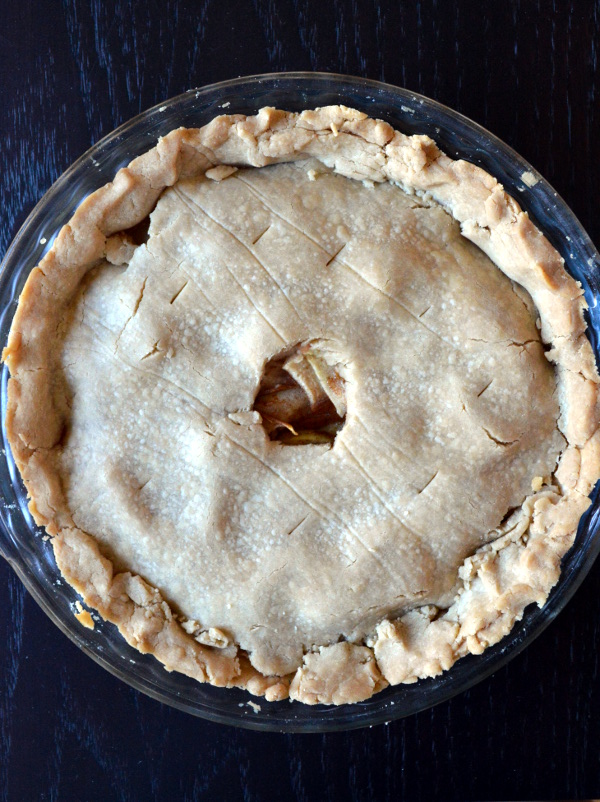 Print
Author: Sondi Bruner
Recipe type: Dessert
Serves: 8
Ingredients
For the crust:
For the filling:
Instructions
To make the crust:
3.2.2925

Check out more of Sondi’s Allergen-Friendly Remixes for great ideas on revamping your favourite recipes to make them allergen friendly! Here are a few to check out:

Got a favourite recipe you’d like to see get an Allergen-Friendly Makeover? Let us know in the comments...

Sondi Bruner is a holistic nutritionist, freelance writer and food blogger. She educates people who follow allergen-friendly diets about how to eat simply, deliciously and safely, allowing them to rediscover the pleasure of food. When she’s wearing her writer’s hat, she works with natural health brands to create content that will help their customers live fulfilling, healthful lives. Find out more at www.sondibruner.com. Or you can follow Sondi on Facebook or Twitter.

SUBSCRIBE TO GET YOUR FREE SPICE BOX EBOOK
You are subscribing to the FBC Food Lovers Newsletter.
You can unsubscribe any time!
Click Me
162shares