As part of our ongoing Canadian Craft Beer series Todd Beal takes us on a craft beer tour of Nova Scotia's beautiful Annapolis Valley. There are 11 main stops along the tour at breweries, pubs and a cidery. And as an added bonus, he adds tips for wineries and local sites! 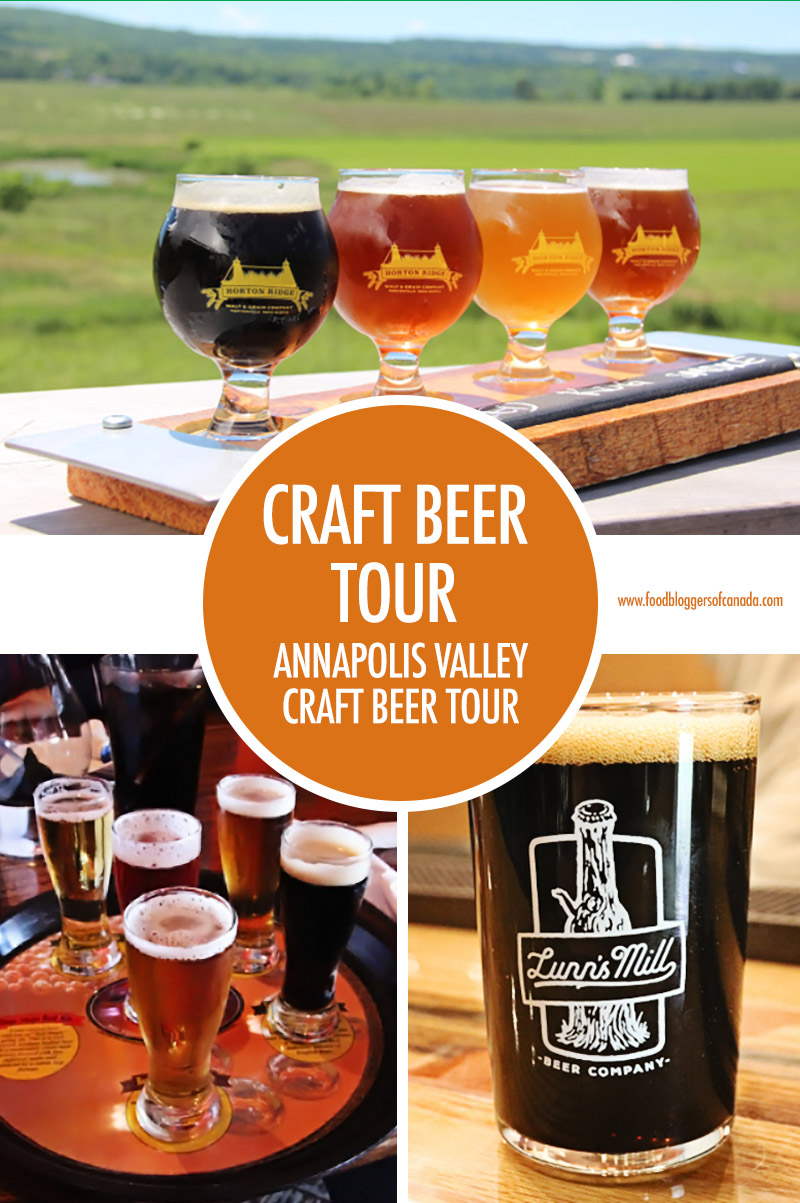 Nova Scotia is a small province by Canadian standards, but it's big on opportunities for visitors, whether it be beaches, historical places, hiking, or food and craft beer. This time we leave the urban center of Halifax that I wrote about in A Walking Tour of Halifax Craft Breweries and do a road trip through the Annapolis Valley.

The "Valley," as the locals call it, runs over 100 kilometres in the northwest part of the province and is formed by the parallel mountain ranges of North Mountain and South Mountain. The area is noted for its warmer microclimate and fertile soil, making it ideal for agriculture. Over the last couple of decades it's attracted over half of Nova Scotia's vineyards.

We start the trip in Windsor, about 45 minutes from Halifax, that promotes itself as the birthplace of hockey and where, on one week end in October, you can watch racers in giant hollowed out pumpkins race across the lake. In Windsor we visit a brewery and tap room with "real class," Schoolhouse Brewery.

Its original location was in an actual schoolhouse prior to moving to its new brewery and tap room at 40 Water Street. They have a lot of fun with the branding calling staff "faculty" and guest taps "exchange students." They have inside and outside seating as well as a limited menu for snacking. You can often find live music here as well. For purchase, you find bottles and cans, growler fills and merchandise.

Leaving Windsor, you get on the Harvest Highway NS Route 101 traveling west for about 15 minutes to the Maritimes' first malt house, Horton Ridge Malt and Grain Company just off exit 10 at 2504 Ridge Road in Horton.

The building is a working floor malt operation that supplies many breweries in the area. (See our previous feature about Horton Ridge). The taps are continually rotating with their own beer as well as beer produced with their malt. Their taproom offer expansive views of their farm as well as a patio to drink your beer in the sun. They also offer merchandise and growler fills, as well as their malt for the home brewer.

Wolfville may be a good place to stop if you want to make it a two-day trip, not only affording a visit to Annapolis Cider Company at 388 Main Street and Paddy's Brewpub at 460 Main Street, but also use of the Wolfville Magic Winery Bus.

Annapolis Cider uses all local apples, blending outstanding ciders as well as offering tours and merchandise at its cidery. Paddy's is a long-time brewer in Nova Scotia offering beer made onsite as well as well as a full menu of pub food and growlers to take away.

Finally the Magic Winery Bus is hop-on, hop-off and departs Wolfville, looping around five wineries and back on an hour-long route. It's extremely popular on weekends through the summer.

When it's time to leave Wolfville, we head west on Route 1 to Greenwich about five minutes away and take route 358 to Wayfarers Ale Society at 1116 Kars Street in Port Williams. Wayfarers has a taproom that overlooks the brewery and has a great deck to watch the tide come in and out of the Cornwallis River. Wayfarers has cans, merchandise and growlers to go.

Next door you'll find Sea Level Brewing inside the Port Pub Building. You can buy cans and growlers to go here, but there's no onsite consumption. If you want, though, the Port Pub has all their beer on tap.

These two breweries are on the Starr's Point Loop that also includes Barrelling Tide Distillery, Planters Ridge Winery as well as Fox Hill cheese, if you want to take a small detour. Lastly at this location, following route 358 further north will bring you to the Blomidon Look Off Provincial Park atop North Mountain, giving a breathtaking view of the valley floor in which five counties can be seen on a clear day.

Time to resume the western tour when you finish exploring…. You can take the slower Route 1 or faster 101 depending on what you like. Our next destination is Bad Apple Brewhouse at 515 Parker Condon Road in Somerset. There are no amenities here, just great beer, cider and merchandise. Any trip to the Valley requires a stop here from me.

We now head to Lawrencetown, about 30 minutes down the road, and visit Lunn's Mill Beer Company. As a side note, there are two Lawrencetowns in Nova Scotia and each needs to be qualified with a descriptor. In this case you add "the Valley one."

Lunn's Mill is a relatively new operation but has quickly become a fan favourite. On site here at 515 Carleton Road you'll find their brewery, taproom and a kitchen cranking out a light pub-style menu. They have a few cans but mostly sell via growlers to go.

Only two more breweries on our odyssey! Next stop is Annapolis Royal, about 30 minutes away. This area's first capital is an important part of Canada's history. Fort Anne was first occupied by the Scottish in 1629 and changed hands seven times. The Fort is also Canada's first National Historic Site.

Also in Annapolis Royal at 302 St. George Street is the Annapolis Brewing Company. The brewery is new but innovative, launching a craft alcohol farmers market on Sundays here and selling its beer in retro stubbies. The tap room has 20 taps of its own beer and that of other Nova Scotia breweries.

After enjoying the historic village of Annapolis Royal we travel about 45 minutes to just outside Digby. 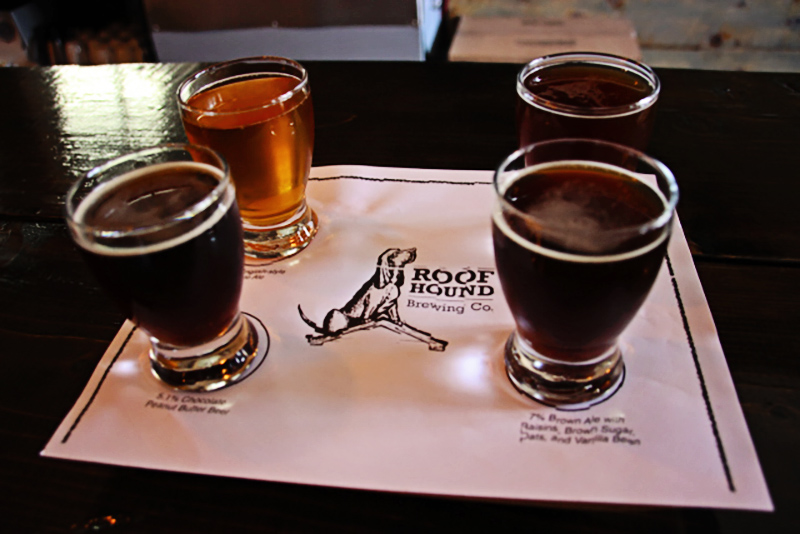 Roof Hound Brewing at 2580 Ridge Road is the brainchild of Les Barr, who not only makes great beer but cooks up amazing food. This location affords a beautiful vista of Digby county. The bottled beer to go is in stubbies as well. Good news for your poor driver: they can now go off duty because there's also an Airbnb on site called the The Dog House.

After Roof Hound you can return to Halifax, about two hours away, or continue on to Yarmouth and check out the breweries on the South Shore, but that I'll leave for another article.

As always, please drink responsibly. No drinking and driving!

Almost across the street from Lunn’s is a fruit winery called Beavercreek. They have a small cafe and gift shop on the premises.

Also, in Lequille, which is just down the road from Annapolis Royal, there is Still Fired Distilleries, which makes some delicious spirits from locally sourced ingredients.

Hello, based on what I read about, I am wondering if this is an actual tour or merely a suggested route that one would take on their own?

This is a self-guided tour that Todd, our Atlantic Canada beer reviewer, has put together for anyone who might be interested.

that is right a self guided tour. There is a lot of new places to go up there now too

Hey Todd. For someone looking to go in the next two weeks, what new places would you now add to this list?