This week’s on Canada’s Craft Beer we're excited to introduce our newest craft beer contributor, Todd Beal.  Todd will be coving that craft beer scene in Atlantic Canada, featuring some of the great beers and breweries coming out of NS, NB, NL and PEI.  Welcome aboard Todd! 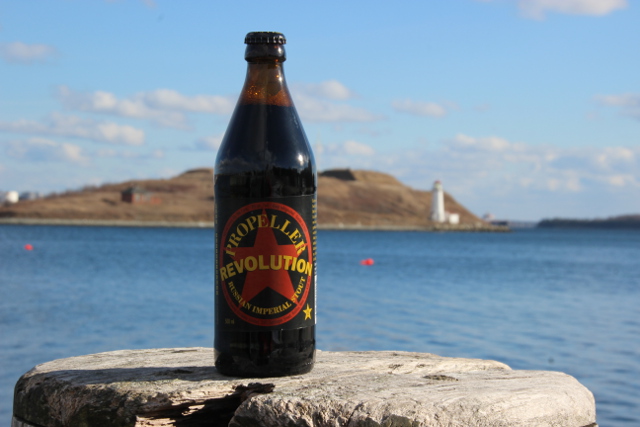 In Atlantic Canada winter brings rain, snow, wind, long nights and freezing cold. It also brings some of my most favorite beers of the year, darker, full-flavoured, a little higher in alcohol and delicious. In other words perfect beers to sip during those long nights.

My favorite, a Russian Imperial Stout (RIS), is a beer that was born of commerce and adaption. In the late 1700's, on the heels of a successful pale ale export market to the far east, British brewers capitalized on Baltic trade routes by exporting porters and their offshoot, stouts. The stouts needed to be made stronger and more aggressively hopped to survive the transit creating this new style . The history is a little murky but the story goes that Peter the Great enjoyed porters from visiting England and insisted on its import. The royal court preferred the darker beers, including Peter's wife, Catherine.

My second winter seasonal is a spruce beer, purported to be North America's oldest beer style. There is a long history of adding spruce to ship's beer to infuse vitamin C to ward off scurvy. Later, as the main ingredient, spruce beer was brewed by boiling spruce and fir tips and then adding molasses to serves the troops in Halifax.

These two wintertime treats are made by two of Nova Scotia's best known craft breweries, Propeller and Garrison, that coincidentally both opened in 1997.

The Russian Imperial Stout first appeared in 2006 and has been very successful for Propeller. It is currently available in 500 ml bottles, growlers and draught in Nova Scotia and next month will appear in New Brunswick. The brewer also tells me they have applied for listing with the LCBO next winter, fingers crossed. It is also an award winner from last fall, winning the gold medal for Strong Stout and Porter at the Atlantic Canada Beer Awards.

Revolution pours black into the glass with a creamy tan head that dissipates quickly. It has a delicious chocolate and roasted malt aroma. Its flavour is rich chocolate, coffee with a long lingering bitterness. The brewers recommend drinking Revolution between 10 and 16 degrees Celsius to fully experience the flavors this beer imparts.

Every autumn, to much fanfare on social media, a large crew, including Garrison Brewing owner Brian Titus and on down the ranks, head north to Meander River Farms in Ashdale Nova Scotia to harvest fresh spruce and fir boughs. Add these with a health amount of molasses and dates along with the malts and hops and you have the ingredients of this popular unique brew.

This beer pours very dark amber with a light brown head with the aroma an unmistakeable molasses, spruce and fruit. The taste has a whole lot going on, first off is molasses and some pinyness followed by slight bitterness. It is very well balanced and at 7.5% quite warming. I would as with the last beer let it warm a little to experience all the flavours. My experience with people who have tried spruce beer isthat you love it or hate it. If you love it, grab a few bottles as it is a limited offering.  And if you hate it, Garrison has a great recipe for cooking beaver in spruce beer you could try!