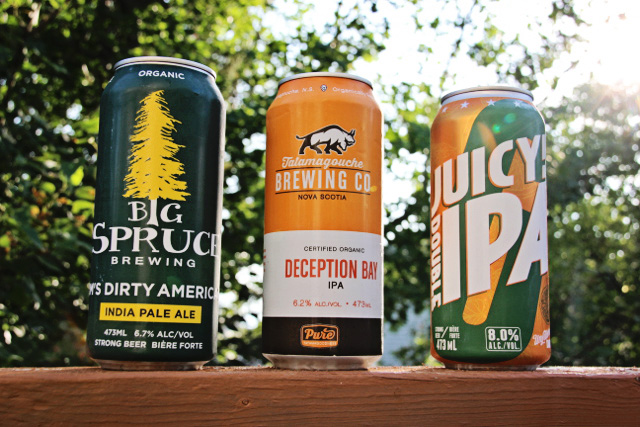 August 3rd was International IPA Day, a day to celebrate the reigning king of craft beer styles. There are two types or styles of IPAs when people describe them, English and American. The English India Pale Ale first appeared in the late 1700s and has an earthy, herbal and floral hop character with a strong malt presence. The American IPA in its modern form started in the mid-1970s with a cleaner malt and yeast character to show off the much more aggressive hopping using American and New World hops with piney or citrus flavours. As craft brewing evolves so do the beers being brewed and there are many subcategories, although unofficial. One such IPA that has sprung up and has gained massive attention is a New England IPA (NEIPA).

What characterizes NEIPAs is that they are cloudy or hazy on purpose, having a more creamy mouthfeel. They have little hop bitterness, instead having a fruity, juicy, citrusy sweetness rather than the dry, dank and bitter that was typical. The hazy ales purport to have begun in Vermont with The Alchemist's Heady Topper.

I touch on three top rated IPAs from Nova Scotia, all from brewers I've introduced to you before. 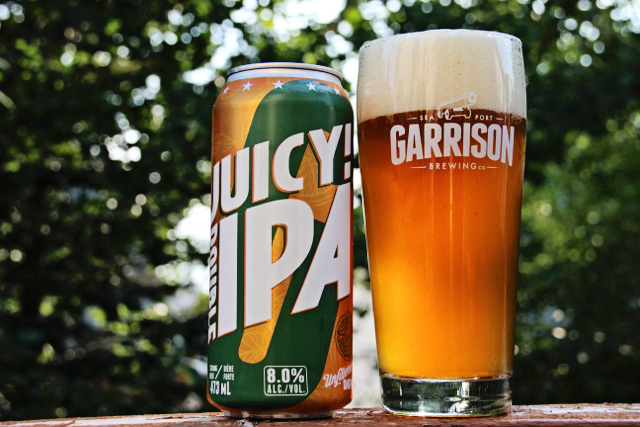 Garrison Brewing is celebrating 20 years of brewing this year and is still making new beers all the time. In May of this year they released Juicy! Double IPA after two one-off "test batches." The brewer's description of this beer is: "This New England-style Double IPA has a beautiful hazy appearance and boasts smooth but intense tropical flavours with an obscene amount of Citra, Mosaic, Comet and Ekuanot plus a secret hop."

Pouring from the 473 ml can Juicy! is a slightly hazy copper colour with a nice white head and good lacing. The aroma is lovely, citrusy and piney with a hint of sweet fruit. The beer is well carbonated and the flavour is dominated by grapefruit with a very slight bitterness at the end. Lovely beer after a hot day.

Brewed in honour of Tim Gregory, who won their inaugural Homebrew Challenge in December of 2013, the IPA is heavily dry hopped with Simcoe hops. Big Spruce says, "We brew and release this as and when we can get a hold of the rare Simcoe hop!"

Fresh from their new canning line, the beer pours orange with a white head. The nose is hoppy citrus and pine with the taste revealing the same. The beer is well carbonated with a bitter hoppy finish.

Tatamagouche Brewing is the youngest brewery of the three, opening in 2014 by the Jost family. It has fast become a favorite and is wrapping up a huge expansion at the brewery on the north shore of Nova Scotia. Deception Bay's popularity changed its status to year-round beer shortly after its release.

The ale poured a bright orangey colour with a nice foamy head that lasts. The aroma is somewhat subtle of citrus and slight earthiness. The flavour is like the nose, lots of citrus with subtle malt flavour and a bitter finish. Body is average and carbonation is good. A very good American IPA.

These are three suburb IPAs to try. For pairing IPAs with food, you need a strong dish not to be overwhelmed. Great pairings are with salty fried food, curry dishes, Mexican meals and a barbecued steak.