I lived in Winnipeg for 18 months back in 2000-2001—including one full winter, which I believe qualifies me as an ex-Winnipegger for the rest of my life. Back then, the craft beer scene was small but it seemed to have some energy. There were several local microbreweries: Two Rivers Brewing, Fort Garry Brewing, Agassiz Brewing, and a brewpub called River City Brewing where I spent a fair amount of time and money. You could find all these beers on tap at local pubs and in bottles in the government liquor stores.

Since then, I have visited my family and friends there at least once a year, and, unfortunately, Winnipeg’s once burgeoning beer scene has dwindled somewhat over the intervening years. River City closed. Agassiz closed. Two Rivers merged with Fort Garry, which later amalgamated with Russell Brewing of Surrey, BC. The only positive news came in 2006 when Half Pints Brewing opened.

Another new brewery called the Farmery was announced in 2011 by the owners of a Winnipeg beer-focused restaurant called Luxalune Gastropub; it was especially exciting because they said it would be Canada’s first estate brewery; it would grow its own barley and hops, malt that barley on site, and brew the beers there, too. Since then, however, the estate brewery concept has been postponed, although the brewery has put out its first beer, Farmery Lager, brewed on contract by Muskoka Brewing. It is not an especially exciting beer–rather reminiscent of an industrial adjunct lager—and it is controversial in the Manitoba craft beer community because the Farmery continues to describe itself as a “home grown” estate brewery even though the beer is brewed in Ontario.

But it looks like the situation is beginning to improve. Recently, Manitoba announced an overhaul of its liquor laws that should make it easier for new breweries and especially brewpubs to open, so it is likely that there will be more local craft choices soon. A craft beer tap house called Barley Brothers with about 70 taps opened in the Polo Park area last year, and its owners are planning to open a new location near the new football stadium at the University of Manitoba next year that will have twice as many taps.

Obviously, with only two local breweries, most of the craft beer on tap at Barley Brothers comes from outside Manitoba, but what really impressed me was that there were no big brewery taps there, not even one. Winnipeg has several other restaurants that focus on craft beer, too, including the Grove, Yellow Dog Tavern, Peasant Cookery, and the King’s Head Pub, which was my “local” back when I lived there.

300 Years of Beer is a great book for those interested in learning more about Manitoba’s beer history.  And here are some beers from Manitoba you might be able to find where you live. 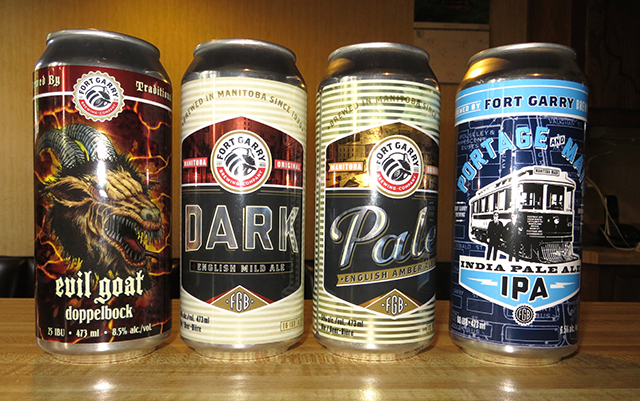 Of the ones I sampled on my recent visit, my favourites were Fort Garry Dark, a well crafted English Mild Ale, and the Portage & Main IPA, which had a substantial dose of hop character over top of a sweet malty backbone.

Half Pints Brewing is the local darling among craft beer enthusiasts in Winnipeg, and justifiably so. Its core beers—St. James Pale Ale, Bulldog Amber Ale, Little Scrapper IPA and Stir Stick Stout—are consistently well made, and the limited release seasonals are excellent, even occasionally daring.

I enjoyed the Weizenheimer (5% ABV, 13 IBU) on tap at Barley Brothers when I was in Winnipeg last month, and luckily for me, Humulus Ludicrous Double IPA had just been released (8.0% ABV, 100 IBU) so I was able to pick up a couple bottles of that excellent and potent brew.

The Pothole Porter (7.9% ABV, 27 IBU) is another seasonal favourite, and I remember really liking the Saison de la Ceinture Fléchée when I had the chance to taste it last year. All in all, I’d say Half Pints beers are always worth checking out if you get the chance.

SUBSCRIBE TO GET YOUR FREE SPICE BOX EBOOK
You are subscribing to the FBC Food Lovers Newsletter.
You can unsubscribe any time!
Click Me
188shares

Great post for someone who does not live in Manitoba to find out what all craft beer they have to offer. I live in Ontario and it’s really hard to get a hold of other province’s craft beer at LCBO or Beer store, specially in the bottle. Hopefully one day I get the chance to try all these beers :). Cheers.

Unfortunately with Canada’s strange liquor laws that vary by province it’s hard to experience another province’s beer or wine anywhere in the country. Hopefully that’s something that changes in the future!