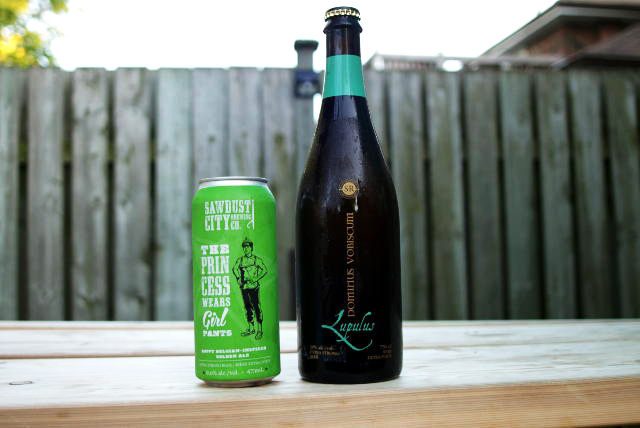 Some beer styles highlight one or two elements over others. American IPAs, for instance, are built on hops and malt; Belgian-style farmhouse ales put yeast at the forefront and certain German bocks get most of their character from malt. This month's selections break that mold with their profiles that strike a balance between malt, hops and yeast all turned to max volume.

Compared to, say, German-style pilsener, which has dozens of brands in a fairly tight range, the strong end of the Belgian golden ale spectrum is sparsely populated with lone wolves who would rather not be strictly classified. In 2012, Frederick Tremblay described the Lupulus his brewery makes to the Toronto Star as a "triple IPA," and went on to add, "if that were really a style, if it really matters."

The folks at Gravenhurst's Sawdust City make a similar point about style descriptions by putting "hoppy Belgian-inspired golden ale" on the can of The Princess Wears Girl Pants. Nothing says, "well, if we must describe it, I suppose we'll call it," like four adjectives and a hyphen.

Note that the uncommonly high alcohol content on both of these mean that you should base your when-can-I-swim-next (and other more serious responsible consumption) calculations on the wine scale. With ABV counts clocking in near 10%, they're also well suited to splitting a bottle or can amongst friends at a midsummer party.

This is one of the most recognized and award-winning products of a Canadian brewery. It's by no means a hidden gem and is rightfully coveted by the wider beer-drinking community, so the LCBO deserves a polite round of applause for bringing this MicroBrasserie Charlevoix brew to Ontario.

Lupulus puts up piles of tight foam from the moment it hits the glass. After the clear, brilliant gold body forms, the head sticks around before giving way to plenty of Brussels lace. The aroma and flavour both draw from a deep pool of slightly sweet grain, and stone and orchard fruit notes punctuated by clean lemon peel. The finish comes to an intense crescendo where the noble hops make themselves heard.

ABV 9%, Available widely including ON and QC

The name on this one is a bit of a mind-bender, but I think that's an intentional stab by Sawdust City at sending the message that this seasonal release stands about from its peers. On paper, it's a strong Belgian golden ale dry hopped with New Zealand's best.

It's hazy yellow with two fingers of head. Golden wheat, lemon candy and prickly spiciness make up the aroma side. Apricots and peaches, plus plenty of tropical notes (including some bitter peel) fill in the flavour side. Princess gets even better after a few minutes airing out in the glass, which gives the slightly metallic, sour edge on the finish time to dissipate.