You may know which classic Canadian dishes you like, but do you know the stories behind them? And how can we define Canadian cuisine if we don’t know its past? In Iconic Canadian Food, Gabby Peyton shares the back stories of a smorgasbord of iconic Canadian dishes. This month Gabby explores the history of  Oka Cheese, a renowned Canadian cheese that originated with Trappist monks. 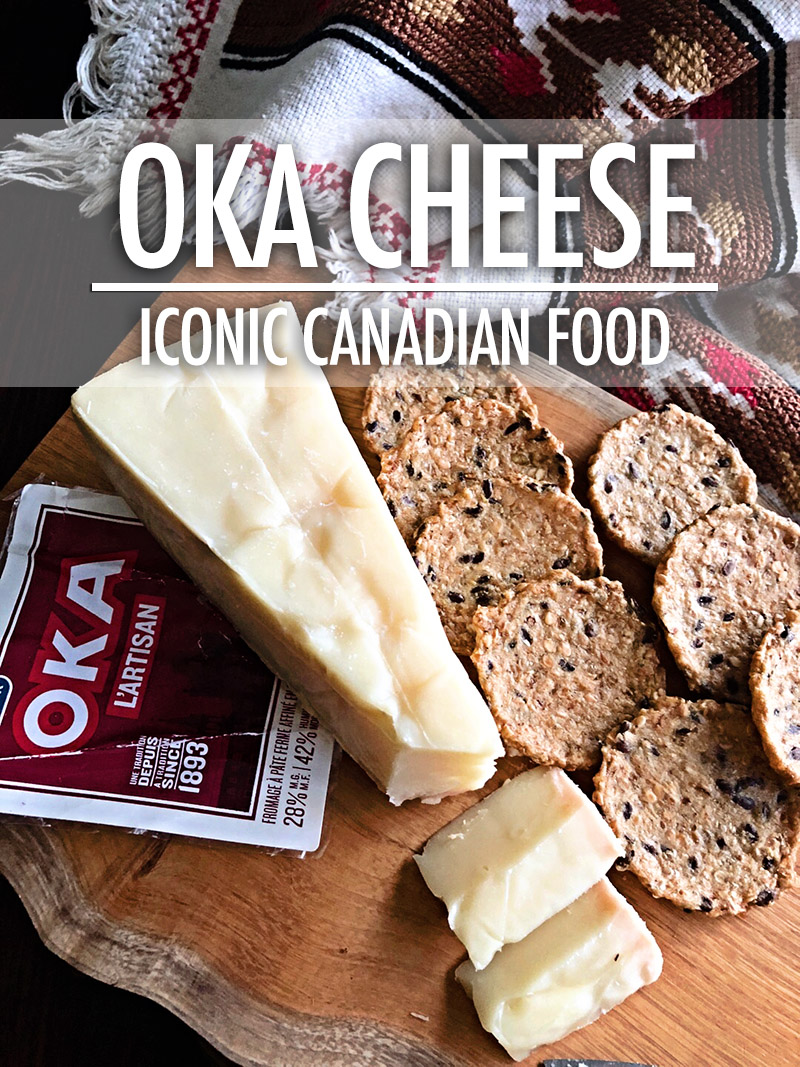 Trappist monks making cheese evokes a quintessentially European image, which might seem impossible to reproduce outside the Old World. Picture those hardworking brothers hunched over iron pots of boiling milk, testing the temperature until it’s just right for making the cheese they became famous for.

But like many Europeans, those Trappist monks eventually made their way to the New World and with them came the cheese-making traditions appreciated (and enjoyed) the world over. Oka came from humble beginnings in a small Quebec monastery in the 1890s, but this iconically Canadian comestible is now known to cheesemongers well beyond Canada’s borders.

While Agropur, the dairy co-operative based in Longueuil, Quebec, took over making the one-of-a-kind compressed curds in the 1980s, legend has it the recipe for Oka is still being produced by one monk on the prairies.

The history of Quebec’s Oka cheese isn’t quite stinky, but the piquant aroma of this semi-soft cheese has wafted into the Canadian culinary history books, becoming one of the most iconic foods produced in the country.

What is Oka Cheese?

The town of Oka, with a population of just under 4,000, sits on the north side of the Ottawa River just as it flows into Lac des Deux Montagnes, an hour outside Montreal.

The monks of Abbey of Bellefontaine arrived six years after the town’s 1875 incorporation, fleeing the increasingly harsh anticlerical laws of their homeland, France. They built Oka Cistercian Trappist Monastery — also known as Abbey of Notre-Dame du Lac — on land given to them by the Order of the Sulpicians. There, the brothers relied on dairy to sustain themselves.

The iconic orange rind of Oka cheese was first made in 1892. Oka is a creamy, semi-firm cheese with a hint of pungency and slightly rubbery texture. It’s made from cow’s milk and aged on South Carolinian Cypress planks, which naturally controls the humidity and ensconces the cheese with unique flavouring.

Oka is produced in the French Trappist style called “Port-du-Salut,” which is famous in its own right — hailing from Entrammes in the Pays de la Loire, this soft cheese is known simply as "Trappist cheese" or "Entrammes cheese" and also sports the recognizable orange rind Canadians know and devour.

As luck would have it, Brother Alphonse Juin from the Port-du-Salut Abbey in Entrammes had the secret recipe for the cheese and brought it with him to Canada: thank cheesus!

The Evolution of Oka Cheese: Some Brilliant Bacteria

Less than a year after the Trappists of Oka started producing their cheese, they took it to the Montreal Exhibition of 1893 and won first place! The following year, they won top prize at the Quebec Exhibition.

The monks of Oka Abbey were able to sustain themselves on the sales of their fabulous cheese for more than seventy-five years until they decided to sell the rights to the cheese in 1981. Agropur become the sole owner of the rights to Oka cheese, but it’s still made in the same aging rooms to maintain the quality the exacting Brother Juin built the brand on.

The beloved cheese-making abbey was sold to the non-profit group Oka Abbey Corp in 2006 and then turned into a tourist and educational site. But don’t worry, you can still visit the monastery and pick up some Oka (along with about 100 other cheeses) at the Magasin de l’Abbaye Oka. The monks of Oka have moved to a smaller, more modern monastery (they even have an Instagram account), and continue to sustain themselves with their consumables at Abbaye Val Notre-Dame.

Passing the Oka Recipe On: From Quebec to Manitoba

While Agropur insists they have the rights to Oka’s recipe, there are others who know differently, in particular a monk in his 80s who lives in Holland, Manitoba. Brother Alberic resides at the Notre Dames des Prairies monastery and has been making cheese for more than 60 years. For all those decades, he’s been using the 300-year-old Port-du-Salut recipe that put Oka on the map.

Brother Alberic is a French-Canadian who came out to the prairies in 1967 and was entrusted with a notebook containing the secret recipe for the cherished cheese, given to the Manitoban monastery by a church superior in 1918. After starting his cheese-making career in Quebec, Alberic has spent the last four decades cultivating the fresh cow’s milk in the cellar of Notre Dames des Prairies to produce thousands of wheels of the orange-rinded delight (which run for $70 a wheel; the Trappists know their worth).

Using the notebook with writings from the original author and jottings from a Brother Oswald, Alberic is teaching Winnipeg chef Dustin Peltier the correct way to make Oka so the secret doesn’t accompany him to the grave — not one of the other five monks at the monastery wanted the job. Peltier and his wife Rachel Isaak plan to start their own cheesemaking business.

Whether you believe Agropur or Alberic, one thing is utterly certain: Oka’s mildly pungent flavour has had a major effect on Canadian food history. Without Oka, many a Canadian cheese board or charcuterie plate would be missing a whole lot of flavour.

Oka is celebrating its 125th birthday in 2018 and there’s no sign of it going anywhere, winning countless awards under the Agropur brand. Both OKA L’Artisan and OKA Frère Alphonse won awards at the 2017 Sélection Caseus cheese competition in Quebec, and L'Artisan has won first prize at the Royal Agricultural Winter Fair in Toronto.

This iconic Canadian delicacy remains part of the proverbial palate, and with the help of passionate cheesemakers, will for generations to come.