This post is part of our on-going series, Canadian Wine — specifically, Canadian Wineries and the remarkable wines they produce. Today, Meaghan Carey takes us to Ontario's Prince Edward County, where the cool climate and limestone-based soil allow Norman Hardie Winery to produce wines that represent the best of the Old and New Worlds. 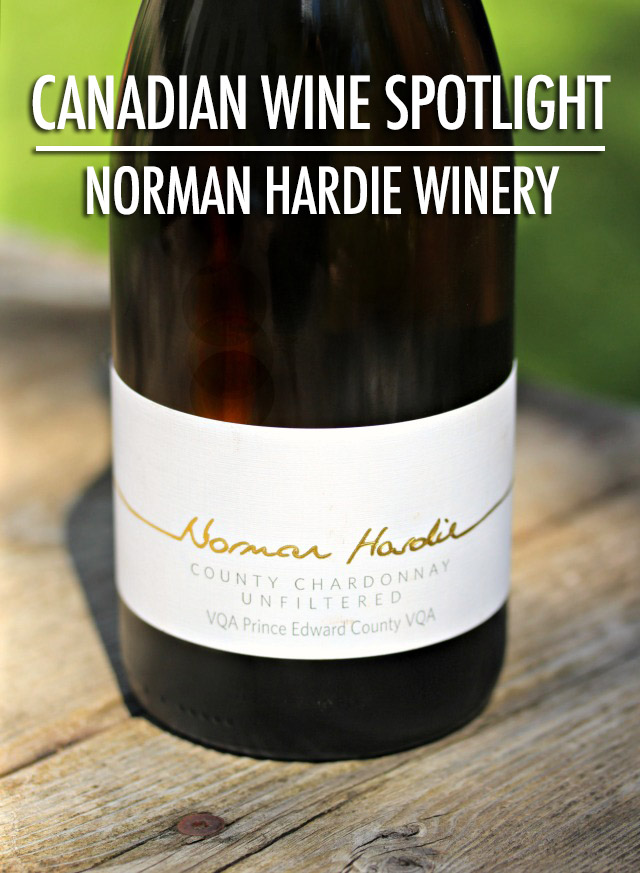 The vines and oak barrels are from France. The limestone and ideal climate are in Southern Ontario.

But pushing boundaries is nothing new for Norman Hardie, the man behind the wine. Hardie trained as a sommelier in France at the age of 22, and put his skill to work as a sommelier with Four Seasons Hotels for seven years. With a thirst for knowledge, Hardie decided that if he were recommending wine and educating others, he needed to truly understand how wine was made — a knowledge that could only be gained by working in vineyards.

In 1996, Hardie traded in his designer suits for farm clothes and a backpack. What started out as a mission for knowledge turned into a six-year journey apprenticing with producers in both hemispheres, and ultimately a lifelong passion for making wine.

When asked what brought Hardie back to Canada and to Prince Edward County, he responded with a slight chuckle that it was the cool climate. To start his winery, Hardie was looking for a limestone-based, cool climate similar to Burgundy (in France), and he found that in Prince Edward County. Cool climates and winemaking may seem counterintuitive, and while cooler climates offer unique challenges to winemakers (like having to light hay fires to ward off spring frosts), cooler climates actually offer the best soils for winemaking or, as Hardie explained, “the soil is the elixir of flavour.”

Hardie planted the first Pinot Noir vines in 2003, followed by a combination of Chardonnay and Pinot Gris in 2004. At that time Prince Edward County was in its infancy as a wine region, particularly in comparison to the established Niagara region. While Hardie did seriously consider the Niagara region for the location of his winery, he decided that there would always be the option to purchase fruit from Niagara growers, but the reverse might not be true of Prince Edward County.

A little more than a decade later, Hardie has 25 acres of land under vine in Prince Edward County, and continues to source grapes from dedicated growers with limestone-clay driven sites in the Niagara region.

Striving to make natural, complex mineral-driven wines, Norman Hardie wines are produced with the philosophy that great wines are made in the vineyard. The grapes are hand picked and every cluster is hand sorted. In the cellar, Hardie and his team take a hands off approach to guiding the wine through the fermentation and aging process.

What impressed me most when I was first introduced to Norman Hardie wines was learning that they don’t use commercial yeast during fermentation, instead choosing to produce their own natural yeast to ensure the connection with the land remains present in the wine. Using commercial yeast assists wine makers in giving wine a specific or consistent flavour profile, meaning that the wine will be the same, or close to the same, year in and year out. For Hardie, using a commercial yeast would be “one big step away from the soil” he loves and a step he isn’t willing to take.

Vintage after vintage, Norman Hardie continues to craft beautiful wines, establishing a reputation for world-class Pinot Noir and Chardonnay. While the wines remain true to the terroir of Southern Ontario — and there is something distinctively Canadian about them — you’ll find both the Pinot Noir and Chardonnay very reminiscent of French Burgundy wines. To put it simply, they are the best of both worlds.

There’s something magical about sipping a glass of Hardie’s County Chardonnay (unfiltered) on a hot, sunny summer evening. The Chardonnay is rich, yet very balanced. The minerality from the limestone soil is matched with refreshing acidity and flavours of tropical fruits. In true fashion of blurring the lines, this masterful Chardonnay would pair wonderfully with lobster, but the perfect pairing is in fact summertime, a patio and BBQ chicken.

Asking Hardie what excites him most about winemaking in Ontario at the moment, he replied the winemakers who are pushing the boundaries, and as a result are starting to gain global recognition. And in his words, it’s “… the start of something major.” As lovers of Canadian wine, we’ll be eagerly waiting, with wine glasses ready, to see just what that may be!

Norman Hardie wines are available in Ontario, Quebec and Alberta, and directly from their online shop at www.normanhardie.com.

Canadian Wine: Norman Hardie Winery was written by Meaghan Carey. Meaghan shares her musings on life as she attempts to cook good food for family and friends from her small kitchen, on her blog Un Assaggio of Food, Wine, and Marriage. Raised in Cape Breton, Meaghan returns home as much as possible and loves to welcome friends to this picturesque corner of Canada each summer. Connect with Meaghan on Facebook, Twitter and Instagram.

Prince Edward Country has been getting a lot of press lately – love that a specific winery was featured here and the food pairings were mentioned. I wish we could source better Ontario wine here in BC (although our wine is nothing to sneeze at!)

Next month will feature our first BC winery so stay tuned! 🙂 In the meantime Norman Hardie and most of the wineries in Ontario are now selling online, which means wine can be delivered to your doorstep!! #win

Beautifully written! Makes me want to visit this Napa Valley of Canada. I’ll try to find a bottle on my next trip to Canada!

I’ve been hearing so much about Prince Edward County lately but I’ve never been. This post makes me want to visit 🙂

Hi Meaghan
I love these stories of people and their dreams coming to life. It fuels our hopes, that being Nicoletta and I to have our dream come true. As for Canadian wines I would have to say I am quite proud of what we as Canadians produce. It is of great quality and Norman Hardie has definitely pushed the boundaries of producing the wine he so envisioned. Your description of the chardonnay sounds so delicious and flavorful, add in the scenery and passion and you have a success story. Lovely post!
Have a great weekend and enjoy all that wine. lol.
Loreto

Thanks Loreto! I’m so pleased to hear you have enjoyed Norm’s story and find it inspirational. It is certainly a life long journey he has embarked and I love that his wines tell that story – each year a little different, but always captivating and thought provoking.
Cheers!

I love this story and my mind continues to open up to wines beyond where I live in BC’s Okanagan Valley. For years I have only sampled the (superb) VQA wines that grow and are made in our valley, but lately I have heard of so many emerging wine regions, and need to branch out and try them! Thanks for such an inspiring and informative post!

Love to hear that these stories are opening you to wines across Canada!! Truly the goal of the series is to highlight the amazing stories of vintners creating beautifully crafted wines throughout Canada. Thank you for reading and joining our journey!