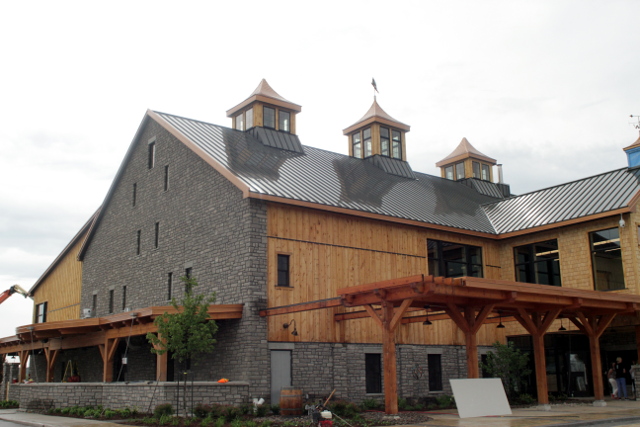 Ontario has breweries in big cities, dockside breweries, and several near major tourist attractions. But until Cowbell Brewing opened in Blyth, Ontario this summer we didn't really have a true destination brewery.

As with most advertising jargon, it's a mostly pointless endeavour to try and define "destination brewery." It's good enough to understand that these are large beer-making operations, generally out in the sticks, that you need to drive to in order to get the full measure of their craft brewing prowess.

Earlier this month, I joined a media tour of the site just before it opened to the public on the August long weekend. Buzzing with activity to get the impressively massive space ready, I felt like I was inside a craft beer cathedral.

I was first introduced to Cowbell's ambitious plans when I visited the site in August 2016 and wrote about them in a previous article. At that point, the long list of aspirations included building North America's first carbon-neutral brewery and the first closed-loop brewery (i.e., all their water is taken from an on-site well and waste water is treated before being returned to the ground). Remarkably, they've hit all of their targets and roughly on schedule.

There's just as much to say about the beer they're making, which divides into their year-round Founders' Series and monthly one-offs for the Renegade Series.

The former are fairly standard offerings named to honour various characters in Blyth's history. The first entry was Absent Landlord, a reinterpreted kolsch with a just-noticeable copper penny backbone that gives it an excellent structure that plays well with a wide variety of salty or rich foods.

Beers two and three — Doc Perdue's Bobcat (a "West Coast [of Ontario] red ale") and Kelly's Contraption (a "New World Hefeweizen") are well made, but to me feel like they have one twist too many just for the sake of being different. In Bobcat there's a bit too much malt character for my tastes and Contraption lets its hops elbow the all-important yeast character out of the way.

Happily, it's back to excellence for the two newcomers to the list. McNall's Mission is a honey brown ale that balances a savoury pop of roastiness against a barely sweet honey finish. (It's created with the addition of honey from a nearby apiary in Wingham, ON.) Rich seems especially pleased with this one and describes it as "an amazing style, a combination of sweet and savoury."

He and I are both suckers for brown ales — now a bit out of favour — especially because of how well they match with food that gets its savour from brown and roasted bits.

Doc Perdue's Boxing Bruin is what Rich calls "a proper IPA." (You can see why a local veterinarian with a late-Victorian habit of collecting exotic animals would earn two beer names.) A taste bears out that description and plenty of tropical and fruity flavours from five hops (Citra, Chinook, Denali, Eldorado and Eureka) fill the senses. This is an IPA lover's IPA with all sorts of citrus and sweet fruit and very little resin.

Our final sample was an oatmeal stout partway through the process of having nitrogen added to it to make it, as Rich says, like "what Guinness feels like."

The specially designed tanks that can handle the needed 65 pounds per square inch of pressure clearly have Rich keen to add nitrogen to just about everything he can lay his hands on: stouts, porters, brown ales, Belgian styles, cold-pressed coffee, and craft sodas to name a few.

Beers from the Founders Series will find their way into the LCBO, but it's worth driving to Blyth to try a broader range of their beers (including recent Renegade Series options like a saison made with rooibos tea and a Belgian-style wit made with lime zest), and also the food program. It's built around tools like their custom-built pizza oven and smoker, as well as an admirable commitment to locally sourced ingredients.

In a town of roughly 1,000 people (even if their workforce amounts to about one-tenth of that) Cowbell will have to send their production to other markets and bring visitors to Blyth. Seems ambitious. But given their success at hitting lofty targets so far, I won't be surprised if Huron County has a new tourism beacon.