Nova Scotia independent craft beer has grown at an incredible rate the last few years. So much so that the east coast province now has the most breweries per capita in Canada. All this beer requires water, hops, yeast and malt that, for the most part, needs to be brought into the province. Alan Stewart of Horton Ridge Malt and Grain Company saw an opportunity to locally produce organic malt for the expanding industry while adding value to his own rye crop.

First I should explain why we need malt and how it's created. Grains used in beer, such as barley, rye and wheat, in their raw form contain starch but the yeast requires sugars to create alcohol. During germination enzymes break down the stored starches to sugars for use by the grain to grow. Essentially malters soak the grain in water and drain a few cycles in a steep tank to start germination.

At this point the grain, in Horton Ridge's case, is spread out on the floor to continue germinating. The germanation is closely watched as well as raked and turned for about four days until the malters decide to continue to drying the "green malt." Placed in a kiln, it slowly dries until it reaches a moisture content of less than five percent. The malt is now almost ready to use in brewing. When the brewers receive it, it needs to be milled, or crushed, to allow water to get at the sugars and enzymes. 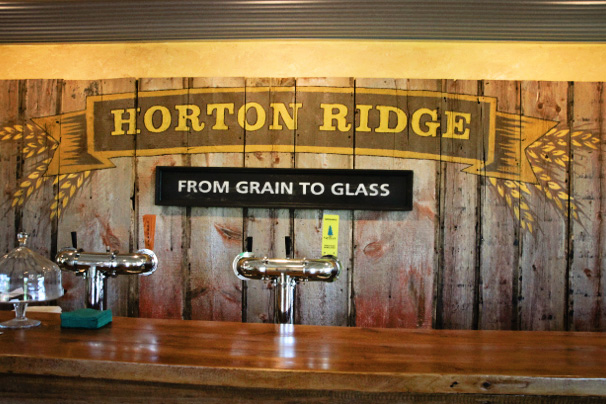 Horton Ridge started making malt in 2016 in Nova Scotia's Annapolis Valley on the family farm near Highway 101. The first malting company in Atlantic Canada has been a success over the last year, forming many partnerships with the breweries in the region and spawning many beers with its rich unique malts. There are two organic brewers locally, Big Spruce Brewing and Tatamagouche Brewing, who use a lot of the grains as well as five other brewers that Horton Ridge considers partners.

The malt house itself is a beautiful structure overlooking scenic farmland, with the roofline paying homage to the malting kilns of Scotland when, before modern technology, they were built to encourage natural air movement over the kilns.

After a little over a year in business, Horton Ridge opened a brewery, taproom and retail space on June 1, 2017. The brewery and taproom showcase their malt. Brewer Stephen Mastroianni, working on a 120 litre system, aims to have three of their six taps for Horton Ridge beer, with a permanent tap for both Big Spruce and Tatamagouche Brewing, as well as a guest tap for another beer also using their malts. The tap room is beautifully constructed of reclaimed boards with a huge window facing south. The retail operation sells the usual t-shirts, glasses and other branded merchandise, as well as malt for the homebrewer.

They're open seven days a week from 11:00 AM to 8:00 PM for pints, flights and snacks, to be enjoyed inside or on the patio. I recently enjoyed a flight of ales on the deck with the company of the owner, who you'll see working around the property. Expect many malt-forward beers here, showcasing their product, and the ability to see a working maltery when in Nova Scotia.