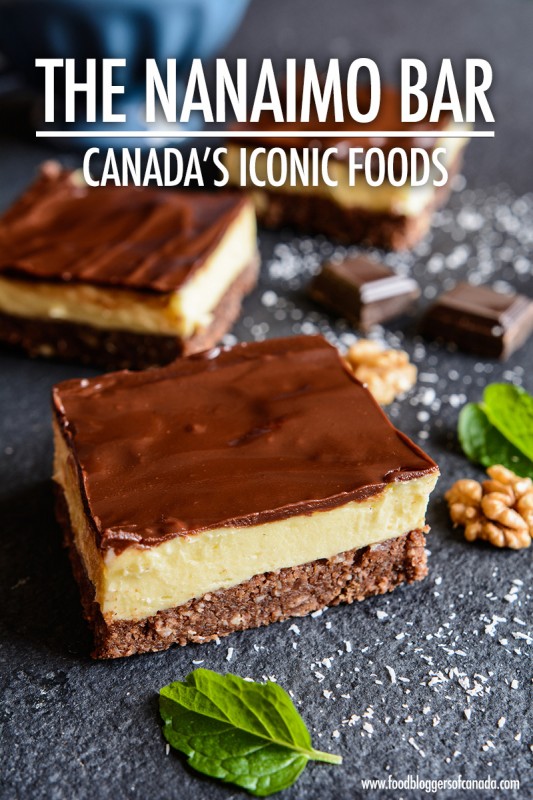 Welcome to our series, Iconic Canadian Food! You may know which classic Canadian dishes you like, but do you know the stories behind them? Gabby Peyton shares the back stories of  a smorgasbord of iconic Canadian dishes. This month Gabby explores the history of Nanaimo Bars, one of Canada's most famous desserts.

I was a teenager before I realized Nanaimo Bars were not a Nanny Peyton original product. In my pubescent state I had no idea the cookies I was devouring by the dozen were ingrained in Canadian food identity in a way I couldn’t conceive of: I didn’t even know Nanaimo was a place! For me, they just meant cookies, and my heart holds a warm place for this comforting Canuck confection.

Like many cherished recipes across Canada, this one came from another nan’s cookbook, so to speak. The humble cerlox-bound, often amateurly illustrated, community cookbooks from across this country are what make Canadian food truly great. My grandmother’s collection is now in my possession and is a valuable asset in researching Canadian food history, like the Nanaimo Bar.

When it comes to culinary history, community cookbooks, otherwise known as church lady cookbooks or auxiliary cookbooks, are as much historical documents as they are delicious treasure troves. Culinary historians like Lenore Newman and Elizabeth Driver have spent countless hours poring over these documents to find common threads (and dishes) laying the groundwork for how Canadians have cooked and eaten for generations.

Among other treasured treats like Date Squares or Blueberry Grunt, the Nanaimo Bar stands out across the country. In 2006 it was voted Canada’s favourite dessert in a National Post poll, and one journalist aptly called them “the hockey of desserts.” They are sold everywhere from school bake sales to Starbucks; even Tim Hortons came out with a Nanaimo Bar-filled donut this year (though they’ve always sold big slabs of the stuff).

And, you’ve been living under a rock if you haven’t heard about the Nanaimo Bar Trail. As Canada’s beloved biscuit, the Nanaimo Bar has a lot to live up to; luckily it has not one, but three layers of flavour to patriate its deliciousness.

Nanaimo Bars Are a Triple Threat (of Layers)

What's in A Nanaimo Bar?

Nanaimo bars are a no-bake cookie square consisting of three distinct layers: the bottom is a crumbly-but-stays-together chocolate cake, the middle layer a filling of yellow buttercream icing infused with custard powder and the top a layer of dark chocolate.

Who Created the Nanaimo Bar?

While no one has been able to determine the authentic creator of Nanaimo Bars, the very first recipe (actually three recipes) for Nanaimo Bars was published in the 1952 Women's Auxiliary to the Nanaimo Hospital Cookbook, but had a different name. This particular cookbook refers to two of the recipes as Chocolate Squares and the other as Chocolate Slices.

The first mention of the cookie’s modern moniker is in the 14th edition of the Edith Adams Prize Cookbook from 1953. Edith Adams is the Canadian equivalent of Betty Crocker, a fictional persona created by the Vancouver Sun to give baking and cooking advice to its readers (back in the days when the Vancouver Sun had a test kitchen!). This cookbook is on display at the Nanaimo Museum to this day.

The makeup of the Nanaimo is characteristic of the time period in which the recipe was developed. Branded ingredients like Graham crackers and Bird’s custard powder and other easily storable ingredients like sweetened coconut or condensed milk are all typically found in cookie recipes in post-Second World War Canada.

According to the cookie lore, Sue Mendelson popularized the bar at her Vancouver cafe the Lazy Gourmet in the 1970s. This is said to be the first place the cookies were for sale outside of the home or church basement. In 1986 she was enlisted to create the Expo 86 cookbook and she included three recipes for Nanaimo Bars in The Official Cookbook of Expo 86, where it gained popularity quickly.

Now there are hundreds of versions of this famous cookie in cookbooks and online. From Mint Nanaimo Bars to Peanut Butter Nanaimo Bars, the possibilities are endless, but the original remains the true Canadian cookie.

If you’re like me, and spent the better part of your life in miserable ignorance of the Nanaimo Bar Trail, now you know. This yellow-brick road paved with sweet custard-infused icing was established in 2010. There are myriad versions of Nanaimo Bars to try along the way from martinis to cheesecakes and even gluten-free versions.

Beginning at the Nanaimo Museum, the trail wanders past 39 establishments in this Vancouver Island town offering up items like the Nanaimo Bar Tea Latte at Tea Desire, or the Nanaimo Bar Ice Cream Sandwich at Two Chefs Affair. There’s even a Nanaimo Bar Spring Roll at Noodlebox Nanaimo and a Deep Fried Nanaimo Bar from Pirate Chips.

While the original inventor of the Nanaimo Bar might remain a mystery, there’s no riddle about why it’s an iconic Canadian food. The Nanaimo Bar belongs to all of the nannies, the women’s groups, and all who devour it. It will remain a mouthwatering mainstay on the Canuck cookie platter.

SUBSCRIBE TO GET YOUR FREE SPICE BOX EBOOK
You are subscribing to the FBC Food Lovers Newsletter.
You can unsubscribe any time!
Click Me
341shares

These look so good! I’m wondering if I have to cook the base layer for a bit so the sugar will dissolve???

Hi there! No, the base should definitely not be cooked. It’s meant to be a bit soft and the sugar will dissolve when you melt it with the butter and cocoa as you prep the base.

Do you have a recipe to share for these? I had one once a few years ago in Vancouver, and it was so dang good!!!

This is one of the original Nanaimo Bar recipes: https://www.tourismnanaimo.com/2017/07/18/original-nanaimo-bar-recipe/

You might see a few variations on it here and there but this is a very standard recipe and almost identical to the one I grew up with. If you’re looking for the custard powder, Bird’s Custard Powder is the one most Canadian will use. It’s the easiest to find – most grocery stores will carry it. Happy baking!