Janine Kennedy, our Canadian expat chef, shares her tips and recipes for classic Irish recipes along with stories of her life in Ireland. Today Janine tells us about her Christmas traditions in Ireland and shares her recipe for Irish Bennies featuring potato farls.

When I moved to rural Ireland from Toronto five years ago, there were a few things about my new home that I wasn’t quite sure about. First of all, there was the whole idea of having to turn on the hot water and wait until the water was hot enough before having a shower. Yes, you heard me right, my Irish farmhouse is stuck in the dark ages — or so it would seem to Canadians. In Ireland, this is normal. The hot water switch is known as the “immersion” and God help you if you leave the house and forget to turn it off — it’s the Dad equivalent of touching the thermostat in Canada. Being used to hot water on demand, it took time for me to remember to turn the hot water on before attempting a shower.

The internet connection in rural Ireland leaves a lot to be desired. When I first arrived, there wasn’t cellular service or internet access in our small village and not too much has changed since. Our wi-fi has good days and bad. Politicians actually include giving us better internet access in their platforms during election season and in a country where IT is such a huge and important industry, this just isn’t acceptable. I tend to yell at my computer a lot.

When I first arrived I just couldn't understand how the Irish live without crispy bacon.

Finally, there were small things about the food that I wasn’t crazy about at first, though now they’ve grown on me. You can’t get crispy bacon here like we have in Canada — only rashers, lardons, “streaky bacon” (which is most like Canadian-style but just doesn’t render the same way), and pancetta are readily available. I’m okay with this now — thick-cut rashers of bacon from our butcher is one of the nicest breakfasts you could have — but when I first arrived I just couldn’t understand how the Irish live without crispy bacon.

I need to get something off my chest: Canada does brunch better than Ireland. Ireland, though, I have to admit, blows us out of the water when it comes to breakfast. There’s nothing nicer than waking up to a full Irish breakfast with sausage, those thick-cut rashers, black and white pudding, roasted tomatoes, sautéed mushrooms and eggs gently fried in Irish creamery butter. On the side, you’ll have slabs of wheaten brown bread, plenty of that delicious butter and cup after cup of perfectly brewed, hot tea.

My Christmases in Ireland have so far been a mixed bag of incorporating my own Canadian traditions and adopting Irish ones. I host cookie swap parties, a concept not quite understood (here, you buy boxes of fancy Christmas biscuits; you don’t make Christmas cookies yourself), but wholeheartedly taken on by my friends and their kids. Like at home in Cape Breton, on Christmas Eve I make a big pot of seafood chowder and buttermilk biscuits and invite all of our friends over for a Christmas tipple.

The Irish bits of Christmas I’ve accepted include making both ham and turkey for Christmas dinner. We also always have a sherry trifle for dessert; it’s my husband’s favourite. It’s not like any trifle I’ve ever had in Canada — it mainly consists of pre-made sponge cake, canned fruit cocktail, strawberry jello and unsweetened whipped cream. It’s not really to my taste, but when well-put-together it’s not too bad.

For Christmas Day breakfast I usually make something the night before and throw it into the oven in the morning. This is usually overnight French toast (made with stale croissant — divine!) or a ham and egg strata. This year, though, we’ll be spending Christmas in Nova Scotia. It will be my first time home for Christmas in seven years. I think, for Christmas Day, I’ll treat my mom and dad (and my husband, too, I guess) to this breakfast: a great coming-together of a hearty Irish breakfast and fancy Canadian brunch. 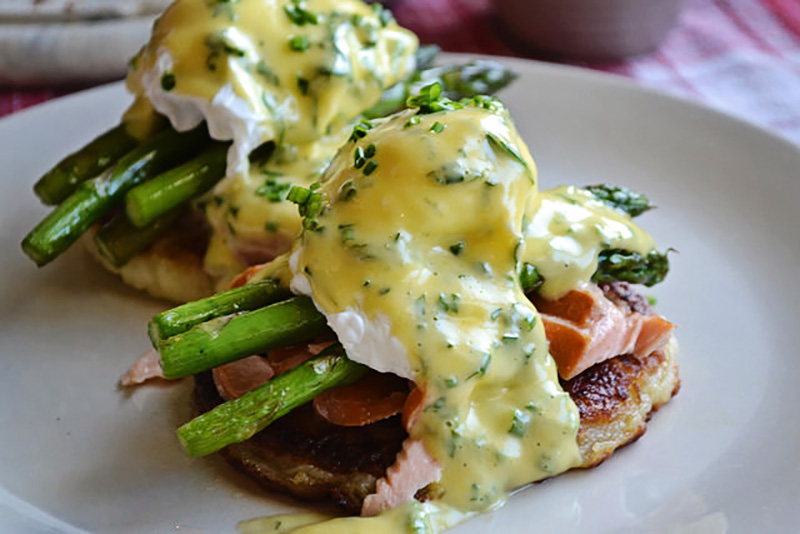 I call these my Irish Bennies. They’re Irish to the core: using Irish hot-smoked salmon, crisp asparagus spears, gently poached eggs and a generous glob of Irish creamery butter hollandaise. Instead of English muffins (how could I?!), I’ve set these bennies on potato farls. A farl is literally translated into a “fourth” in Gaelic. You’ll find these tasty morsels on the side of your Ulster fry when you’re visiting Belfast. They’re so easy to make, and they’re a great component of any Christmas morning breakfast because you can make them the night — or even two nights — before and gently reheat when you’re ready to plate them up.

Indeed, most of this dish is just assembly. Sure, you should poach your eggs and make your hollandaise that morning, but everything else will be ready for you to use. Blanch the asparagus the night before, make the potato farls and flake your hot-smoked salmon filet to make your life a bit easier on Christmas morning.

One suggestion I will make: double the potato farl recipe. Triple it. Or quadruple. Just trust me; your family will smell the potato cakes frying and there’ll be some sticky fingers hanging around your kitchen. Another suggestion: make some mimosas to accompany (just for a bit of fun). And my number one rule: absolutely no calorie counting. ‘Tis the season, after all!

Print
Author: Janine Kennedy
Recipe type: Breakfast
Serves: 6 to 8 Servings
Ingredients
For the Farls:
For the Hollandaise:
For the Rest:
Instructions
3.2.2925 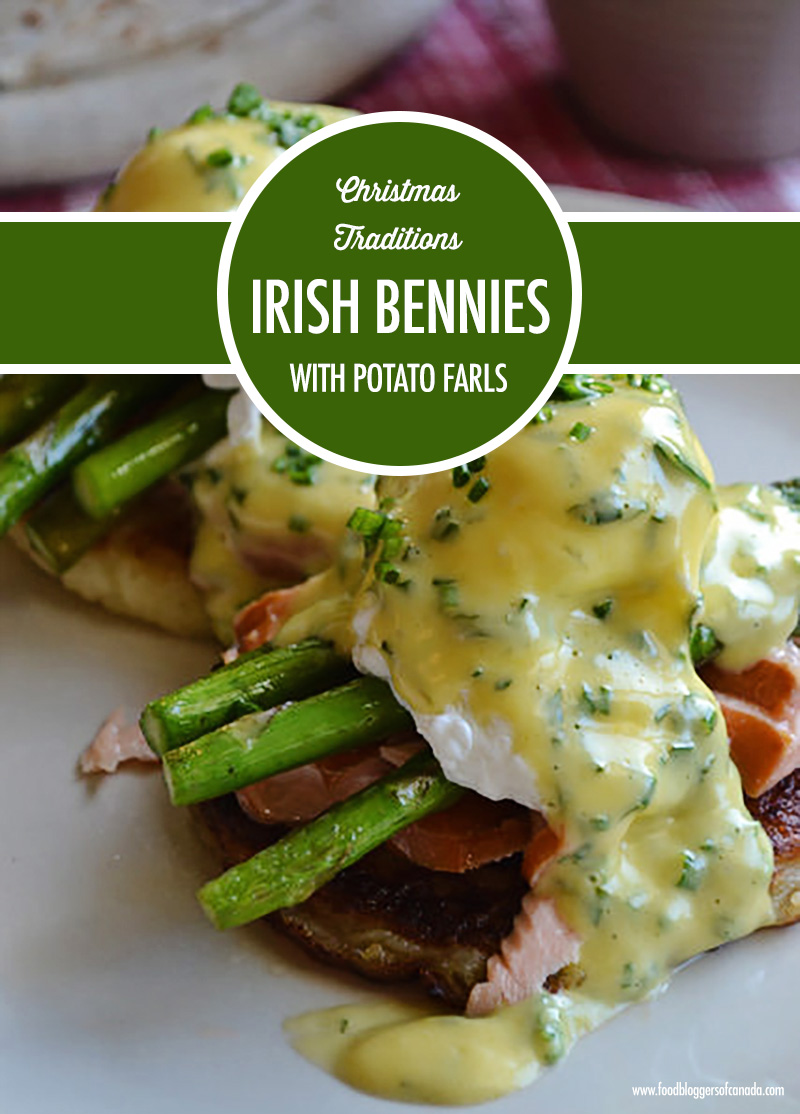 Christmas in Ireland: Irish Bennies with Potato Farls was written by Janine Kennedy. Janine describes herself as Irish by marriage, Canadian by birth, and Cape Bretoner by divine provenance. She shares her recipes and stories as a Canadian chef living in Ireland on her blog, Cooking with Craic. You can connect with Janine on social media at Facebook, Twitter and Instagram.