In our monthly column, One Curious Ingredient, Michelle Peters-Jones explores the history and culinary use of ingredients or dishes that are unfamiliar to her — and probably many of us! We also invite you to share your own stories and recipe links in the comments. Today, Michelle explores crickets as an ingredient. Yes, crickets! Are they really the future of sustainable food? Read on and find out! 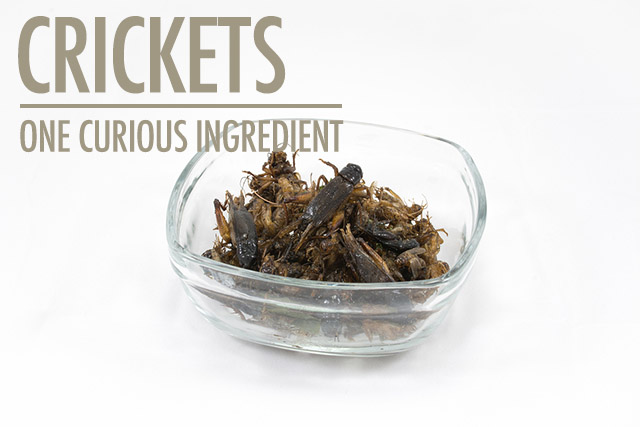 Hark! What's that I hear?

Yes, you read that right. Crickets are our curious ingredient of the month, and before you go queasy, you have to read this first!

Dana McCauley wrote about the emerging trend of eating insects in one of her previous FBC Food Trends TV columns and crickets have been hailed variously as the future of sustainable food, an environmentally sounder version of meat, nutritionally sound and a complete protein. But is the hype really justified? I decided to find out and, I must admit, my research led me down a really interesting rabbit hole as I learned more about this common insect that is, apparently, extremely healthy for you.

The pioneer in cricket farming and production is, surprisingly, a Canadian farm, Entomo Farms, located in Ontario, though recently quite a few other farms and suppliers have joined the (insect) race. Entomo Farms gets permits to source crickets from all over the world, after which they clean, process and get the insects ready for both human and pet consumption.

When I first started my research in the library (yes, really!), I came across this interesting book by Pascal Baudar, The New Wildcrafted Cuisine: Exploring the Exotic Gastronomy of Local Terroir, which has a section on how to forage, trap, store and eat crickets (pp 356-360). I was fascinated by his account of trapping them out on his porch using a butterfly net. He talks about keeping them for a few days while feeding them a healthy diet, and then freezing them to store.

How do you eat crickets? There are three main ways to incorporate crickets into your diet. You can buy them ready roasted, or roast them yourself, for what cricket connoisseurs call a 'potato chip' flavour. You can also buy them roasted and ground up into flour, in order to add them to your everyday baking. Or, if you are brave, you can cook them like any other protein, like Pascal Baudar does.

Once Baudar has foraged and frozen a substantial amount of crickets, he simply rinses them in cold water to defrost, then sautes them in hot oil with a few seasonings, and … voila! If you want them extra crunchy, then you can also add an additional step of dehydrating them in a low oven.

Pascal has also been known to roast crickets with salt and spices, making them a delicious snack or appetizer for the adventurous foodie in you. You can eat the legs or, if you prefer, pull them off easily, as the legs seem to be the 'ick' factor for many people. The matter-of-fact way Baudar describes cooking and eating these insects definitely sounds intriguing, but if that's not your thing, then there are several ways in which to find pre-prepared crickets, as listed above.

In the interests of research, I schlepped down to my local organic food store and found myself a bag of crickets. I'll admit I was pretty squeamish looking at them, but then remembered that I've eaten snakes (erm, long story!) and squirrels, so a tiny insect surely was no challenge after that. I dry roasted a couple of them (okay, perhaps I was not brave enough to start off with more than a couple) and seasoned them with a combination of sea salt, black pepper and chaat masala (I am Indian, after all!). I then shut my eyes tight, stuck both in my mouth and, well, they actually weren't bad after all. The taste was surprisingly like potato chips, with the flavour and crunch, but I do believe that I will pull off the legs before I eat any more in the future, just because (and I know this is psychological) I felt like they wiggled as they went down my throat!

RELATED:  The Spice Box — Getting To Know Ginger

Entomo Farms suggests starting out slow by adding, say, a few roasted crickets to your salads instead of croutons or throwing in a few with your stir fry. They also suggest incorporating the flour into your baking, as a little cricket flour is almost indistinguishable taste wise. If you add more, they have a nutty, earthy, mildly gamey flavour which enhances savoury baking.

I was also chatting with Melissa Hartfiel (of FBC) who mentioned that Dana McCauley has talked about cricket flavours being very terroir-specific, like cheese or wine. This is backed up by some of the cricket farms that mention specifically where their crickets come from, and the differences in flavour between, say, tropical South African crickets and European house crickets, or for that matter, locally raised and foraged crickets (a point that is also mentioned by Bandar).

Obviously, one of the big reasons crickets have been the new food trend is their claim of nutrition and the fact that they are a sustainable alternative to animal farming. There's no doubt that crickets have some big numbers nutritionally: they're a significant source of protein, and if you're not as squeamish as me and don't pull off the legs, they can be fibre rich, along with providing many other vitamins, including a host of B-Vitamins and minerals. They're low calorie and a good source of iron, calcium and omega-3. Crickets are also naturally gluten free, and cricket flour is a good way to add an extra blast of nutrition to your gluten-free baking.

In terms of sustainability, the research is a bit more mixed. Some studies call the consumption of crickets more of a trend, and worry that as a result, communities who depend on crickets for their own dietary needs may be affected (the popularity of quinoa and its effect on Peruvian farmers is held up as an example). Others, however, argue that the water savings alone that are provided by adopting crickets, rather than farmed animals as a source of protein, is worth the sustainable label.

Whatever the arguments, it does look like crickets are here, and if you can brave them, are totally worth a shot. After all, there's something rather Indiana Jones about eating them and getting the kids to try them, eh?

In the meantime, check out some of these resources on eating insects and happy, er, crunching.

Have you used crickets in any of their forms? Let us know in the comments, along with links to any recipes you’ve posted!

SUBSCRIBE TO GET YOUR FREE SPICE BOX EBOOK
You are subscribing to the FBC Food Lovers Newsletter.
You can unsubscribe any time!
Click Me
224shares

Eew I don’t think I need to eat insects for extra protein.lol

I make several products using Entomo Farms’ cricket protein (which is simply roasted and milled crickets) – delicious granola, brownie mix & pancake mix! Also working on some spice combinations because of the awesome nutty taste and fiber! The possibilities are endless.

Don’t be scared – this is a millennia old practice and when they are flour based – you won’t even know the difference. Except, of course, for the positive impact on your health and the planet! Cheers and happy entoeating (my word to describe eating crickets!). [email protected]

Well, I ended up eating grasshoppers a couple weeks ago, and I’m guessing they’re somewhat like crickets. Our friends brought them back from Mexico, where they are sold in markets and eaten like chips. She served them to us in quesadillas, so I had to try making them too, and they weren’t too bad. Surprised myself by almost enjoying them. Here’s a link to how we ate them: http://www.kitchenfrau.com/eating-grasshoppers/

I’ve been seeing crickets here and there lately – cricket flour particularly – and I must admit I am curious! One thing I read was that they are a potential allergen – if you’re allergic to shellfish (lobster, etc) you may be allergic to crickets and cricket flour/products. I would definitely like to try the cricket flour in baking! 😛