In our monthly column, One Curious Ingredient, Michelle Peters-Jones explores the history and culinary use of ingredients or dishes that are unfamiliar to her — and probably many of us! We also invite you to share your own stories and recipe links in the comments. Today, Michelle explores dandelions. We bet you’re curious to learn why they're not just pesky weeds!

Come spring, these bright yellow flowers with their deep roots and bushy green leaves are cursed by gardeners everywhere, what with their eternal spread and ruination of perfect green lawns. But in these times of foraging our own food and a deep-seated love of local, what better ingredient to focus on this month than these "weeds" that are actually incredibly good for you?

Dandelions are actually not a native North American species, but were brought over by European colonists. Scientifically called taraxacum, dandelions are from the sunflower family and have successfully adapted to North American climates, their prolific nature turning them into the weeds we are all so familiar with. Dandelion, from the French dent de lion, or teeth of the lion are called so because of their shape and colour, which resembles the inside of a lion’s mouth.

I'm not even going to tell you how to grow your own dandelions; I know I'd get tarred and feathered for it!

However, if you're growing these plants for culinary or health purposes, make sure that you don't accidentally get ones that have been chemically sprayed with weed killer. Better still, grow your own in pots or pick the ones from your (untreated) front lawns.

As these plants are, surprisingly, grown for their roots, it's worth snipping off any flower heads as they appear. This ensures not just healthy, large roots, but also keeps up good relations with your neighbours because, once dried, flower heads have a habit of flying off and rooting everywhere they find space. Harvest early greens (and flowers, if you must!) during springtime. The roots are harvested in the second year, ideally in early to mid-October, and dried for use.

The entire dandelion plant, including the roots, foliage and flowers, is edible. It was originally brought over for that very reason, and for its health and culinary benefits. 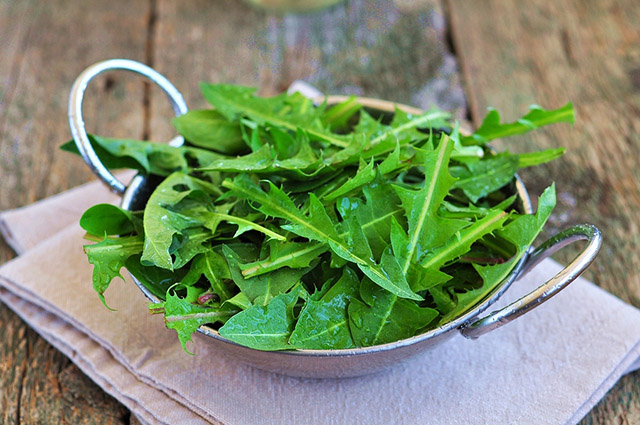 Dandelion leaves are best when they first appear, as they are tender, fresh and crisp. Dandelion greens are bitter (especially older leaves) and are usually served with a combination of lighter, sweeter greens. They're often part of mesclun salad and can be eaten both raw and cooked. They're used in soups, stirred into pastas or even just eaten as a side dish. Throw together a simple Italian-style salad with tender dandelion leaves, thinly sliced fennel, sweet orange segments and fresh parsley with a dressing of orange juice whisked with a little sugar, salt, white pepper and olive oil. Delicious!

The best way to cook dandelion greens is to blanch them in boiling water first, after which you can saute them in some butter and garlic, and either add a splash of cream or stir them into anything else that you might be cooking at the same time. They pair well with salty and sweet flavours like anchovies or stone fruits, and are a good — and cheaper — substitute for other bitter greens.

Dandelion greens are extremely healthy, with a 50 g serving providing you Vitamins K, C and A, along with potassium, iron, magnesium and folate (which is good for mothers-to-be). They also provide fibre, required for a healthy digestive system. 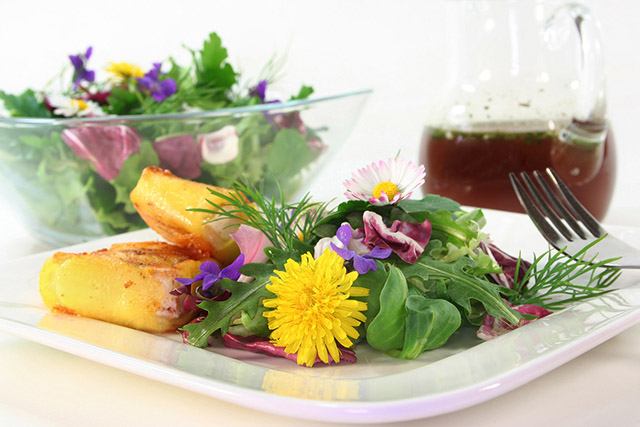 Dandelion flowers, if you choose to keep them, can be harvested when they're bright yellow. Strip them of any green bits first, as they can be quite bitter otherwise. Once prepped, the flowers are sweet and crunchy and add a beautiful splash of colour to fresh salads. Or you can make them into fritters by dipping them in tempura batter and deep-frying, à la zucchini flowers. Dandelion flowers can also be steeped in hot water to make a refreshing dandelion tea and can be used to make dandelion wine.

Dandelion roots are used more commonly than we think. You can harvest the roots, ideally at the end of autumn (though they can be harvested throughout spring and summer as well). They can be eaten fresh or dried. If preparing them fresh, harvest and wash well, then scrape off the outer skin. Cut into small cubes and boil for eight to 10 minutes, until softened. Season with salt and pepper, and eat, or fry them in some butter and garlic for a delicious side dish. You can also roast them in some olive oil, salt and pepper. 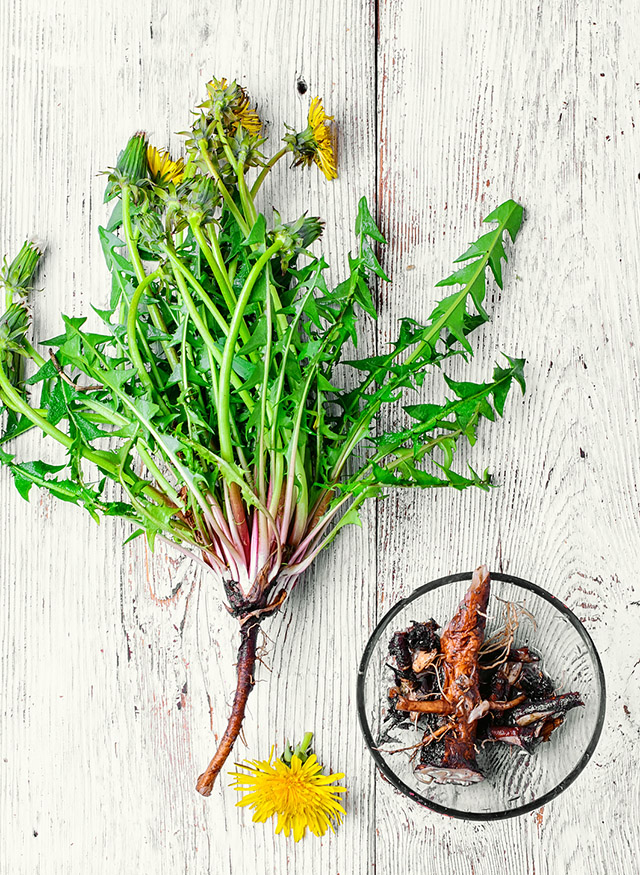 Dandelion roots can be dried, either in a dehydrator or in a cool, dry place. They take about 15 to 20 days to dry completely. Make sure you dry the roots whole, as otherwise you will lose the inulin in the sap that's the healthy part of these roots. Once dry, snap a root in half. If it's white and not grey, you've dried them perfectly, after which you can store them in an airtight bag in a cool dry place.

Keep roots only for a season (it's not like you won't have any more dandelions the next season, mind!) as they're prone to mould and bugs. Powdered dandelion roots are used as a coffee substitute, as well as being known to have a host of health benefits, from being used as a 'liver tonic' to an antioxidant, anti-inflammatory, and for kidney diseases. In recent times, they've also been linked with anti-cancer properties. As with most natural remedies, however, make sure you consult your doctor first before you use them.

Can I now be forgiven for extolling the virtues of and being curious about this humble, much disliked weed?

And finally, did you know that another French word for dandelion is pissenlit, which means 'pee your bed'? This is because dandelions are a well-known diuretic, in addition to being good for that old digestive system too!

If you're looking to try cooking with dandelions we've got several dandelion recipes ready for you to try!

Have you used dandelions in any of their forms? Let us know in the comments, along with links to any recipes you've posted!

SUBSCRIBE TO GET YOUR FREE SPICE BOX EBOOK
You are subscribing to the FBC Food Lovers Newsletter.
You can unsubscribe any time!
Click Me
237shares

I love dandelions so am pleased to see them featured here. A couple more ideas: I make pesto from the greens (best harvested before the flowers bloom.) Then I use the pesto as a condiment. I find that dandelions that grow in the shade or partial shade have the most tender greens. I have also started to fry the blossoms (dipped in egg first.). All yum!

great ideas! Pesto with the flavours of Summer!

Wow, dandelion pesto sounds interesting! Thanks for sharing the idea.

Oh, oh! I’m so glad I’m not the only one who wants to grow dandelions. i live in downtown Denver. My neighborhood actually has ZERO grass. I’m not kidding you. One little dog park has astroturf, and there are no dandelions growing there!

Ok… so I saw some seeding along the fence line where doggies do their business, but I decided to get them when they were seeding and plant them on my 3rd floor balcony. So far nothing. Maybe I didn’t plant them deep enough? I have beautiful organic dirt in 2 big pots… so they should grow.

Do you have any idea how long it takes them to germinate? I love dandelions… been eating them (and roses) since I was a kid. Hope someone has some thoughts! Grrrr… I want my dandelions!

Thanks for doing the research Michelle. I have only used the leaves before – bought at the store or the market. Great post as always.

Bon appetit! Let us know how you use them down the road!

When we make dandelion salad, we always add either orange or peach and some maple syrup. If any is left over –rarely– we dry it in the food dryer and powder it to sprinkle on other salads or buttered toast. If the chunks of orange are big enough and the dandelion leaves large enough we just crumble it all and eat it as a snack.

Sounds like a perfect way to enjoy Summer eats!

Dandelion honey, sort of. I will have to ask my mother about the Recipe. As kids we would pick the flowers which mom used to make honey. I am thinking it’s more of a syrup though.

So, not honey, but jelly is what mom used to make.
The Montreal Gazette did an article last year or so on it.

I think it’s hilarious that we use an anglicism of the french for the flower, since I was taught (in french immersion classes) to call them Pis-en-lit (which translates as “pee the bed.”)

Guess I should have finished reading the article, first! Ha!