Canada’s Chefs: Sousanh Chanthalangsy of Yellowknife’s One of a Thai 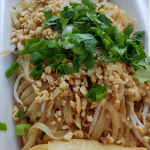 As part of the Canada 150 celebrations in 2017, we’ve been exploring Canadian food from coast to coast. In our Canada's Chefs series, Tiffany Mayer profiled Canadian Chefs from every province, embracing Canadian cuisine. This month she interviews Chef Sousanh Chanthalangsy, who owns what may be Canada's northern-most food truck, One of a Thai in Yellowknife, Northwest Territories.

Some people might think extreme cooking involves a box of random mystery ingredients and a tight time limit to make something palatable from them.

But how about cooking Thai food in Yellowknife, Northwest Territories? If you’re not convinced, meet Sousanh Chanthalangsy, the owner and operator of One of a Thai.

Twice a year, Chanthalangsy has to travel from the territorial capital to Edmonton, AB, to stock up on ingredients for her three-person operation that serves up Pad Thai, spicy grilled beef salad with rice, curries, and satay skewers.

It’s a 15-hour drive, partly on an ice road because it’s impossible to go during “break-up season” when the frozen artery is thawing. Until five years ago, the trip also included catching a ferry across the Mackenzie River. Fortunately, the Deh Cho Bridge opened in late 2012, making that leg of the journey a little easier.

Chanthalangsy’s other option is flying to the Alberta capital to shop, but flights can sometimes push $1,000.

In between her semi-annual treks to the big city for shrimp paste, makrut lime leaves, galangal, rice noodles and fish sauce, Chanthalangsy relies on a neighbourhood convenience store to flesh out her menu. It’s her source for produce like green papaya to make a toothsome salad that boasts the salty, sour, sweet and spicy flavours so distinguishable in Thai cuisine.

But it’s “hit and miss,” she says. There are days when there’s nary a green papaya to be had in Yellowknife and mango salad fills the void instead.

Oh, and if that’s not extreme enough, she cooks and serves authentic Thai food with her mom, Thip, and cousin, Lisa, in a tiny galley on wheels.

Chanthalangsy is a food truck chef in a place where food truck season starts mid-May, a reasonable sounding proposition, save for the fact that daily highs are still comfortably below freezing.

“Winter here is about eight months long, but for us, once it hits -5°C, that’s like summer for us. If the weather goes like that, we try to launch,” Chanthalangsy says.

If she’s lucky, Chanthalangsy can ride out the season for about five months, pushing it to October like she did this year.

“It was cold,” she recalls. “There was snow on there ground, and we were like, ‘We got this.’ We had our gloves and our toques but people actually came. If I could go longer I would, but I can’t make people stand out there in the cold.”

So why bother being what may be Canada’s most northern roving outpost for Thai food? Mostly because no one else was doing it, and there was a hunger for the seemingly exotic flavours that were the norm for Chanthalangsy while growing up in Winnipeg, MB.

“When we came, there was only one Thai lady in Yellowknife. She had a babysitting service. There was no Thai cuisine when we came up here, so it was exciting,” Chanthalangsy remembers.

Still, starting a Thai food truck — or a bricks-and-mortar Southeast Asian eatery — in the Northwest Territories wasn’t even a thought when an adventurous Chanthalangsy moved just 400 kilometres shy of the Arctic Circle 14 years ago.

She was 22 and managing a McDonald’s in Winnipeg when she was offered a year-long post in Yellowknife with the fast food monolith.

“It was, ‘Hmmm, Yellowknife. I don’t even know where that is,’ ” Chanthalangsy says.

Something compelled her to take a chance, though. She and her boyfriend, Alex, packed whatever would fit in their small SUV, and headed north with only two weeks' notice to friends and family.

“We were going to do it for a year. For some reason, after the first year, we fell in love with the place. It was smaller than Winnipeg but the people and the environment alone made us stay.”

Soon enough, she convinced Thip and Lisa to make the move, too.

For professional development, Chanthalangsy signed up for a marketing course in which she created a mock catering business as a final project. She presented the idea to her class, serving her mom’s Pad Thai to make her point. Her classmates loved it. One of them even asked if Chanthalangsy would be up for selling the noodle dish at a local music festival later that year.

RELATED:  Talk to Me: The Basics of Interviewing

She said yes with no sense of what was involved to feed hungry masses.

“That was a big learning curve for us. It was a big event. Next thing, a woman came up to me and said, ‘Can you cater my retirement party?’”

All of it rekindled a dream that Chanthalangsy had as a young girl. Her friends adored her mother’s cooking, and because of that, Chanthalangsy grew up wanting to start a business with Thip after graduating high school.

She took the party catering gig after the music festival. Not long after, she was putting in days at McDonald’s, and spending her nights cooking Thai food at the local curling club for a clientele that included the curious and those throwing rocks. 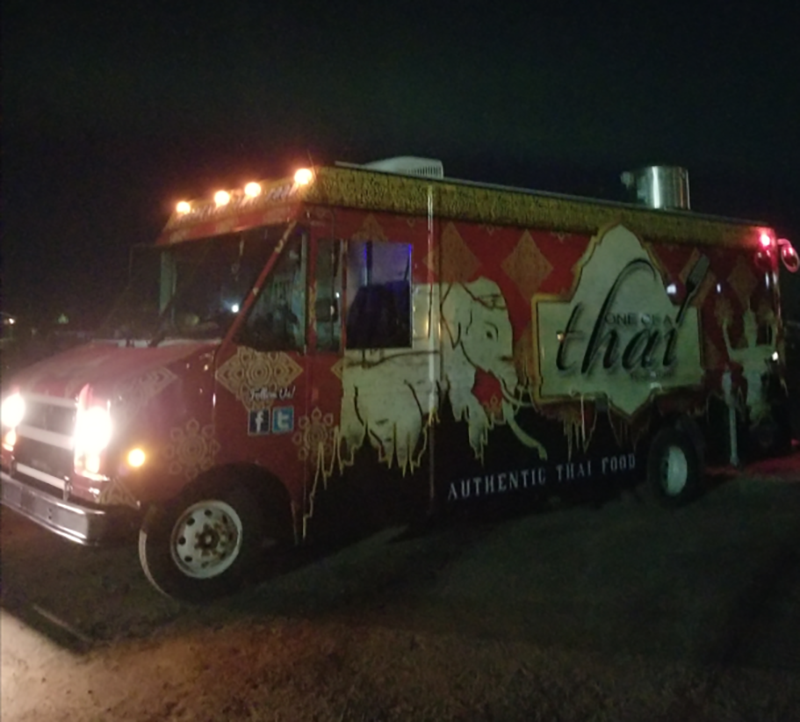 By the summer of 2011, she traded the Golden Arches for steel axles. Chanthalangsy bought a trailer, making One of a Thai mobile between May and October. Come winter those first few years, she’d park herself in the curling club kitchen, doing lunch and dinner there.

Three years ago, she drove a souped up courier cube van from Vancouver along that ice road to Yellowknife, and One of Thai officially became one of city’s tiny but mighty fleet of food trucks. Her cousin takes orders while Chanthalangsy and her mom cook.

“We just couldn’t keep up with demand,” Chanthalangsy remembers. “The kitchen we have (in the truck) is way, way bigger than the trailer. We all have our own space.”

And a cooking style all their own. Since opening One of Thai, spring rolls and other Thai-inspired dishes have sprung up on the menus of local Yellowknife restaurants. But the quality and authenticity of Chanthalangsy’s food was untouchable.

In 2013, Canadian Living ranked One of a Thai among the top eight food trucks in Canada.

Three years later, Chanthalangsy put her extreme cooking skills to the test when she landed a spot on Chopped Canada.

Business boomed. Chanthalangsy was prepared for it, though. She was used to the hustle at McDonald’s, and all the food safety requirements of running a restaurant. Health inspectors knew her, and knew they didn’t have to worry, she says.

That includes being the kitchen-creative daughter of a single mom. Growing up, Chanthalangsy often made dinner for her brother while Thip was at work. Her inspiration came from the hours watching the family matriarch make something out of nothing at the stove.

“Growing up, I always wanted to make sure there was food for her and my brother. Even if it was macaroni and cheese, I’d add cilantro and green onions. I’d always ask if this is OK and she’d say, ‘No, add this.’ Your mom’s your worst critic,” she says with a laugh. 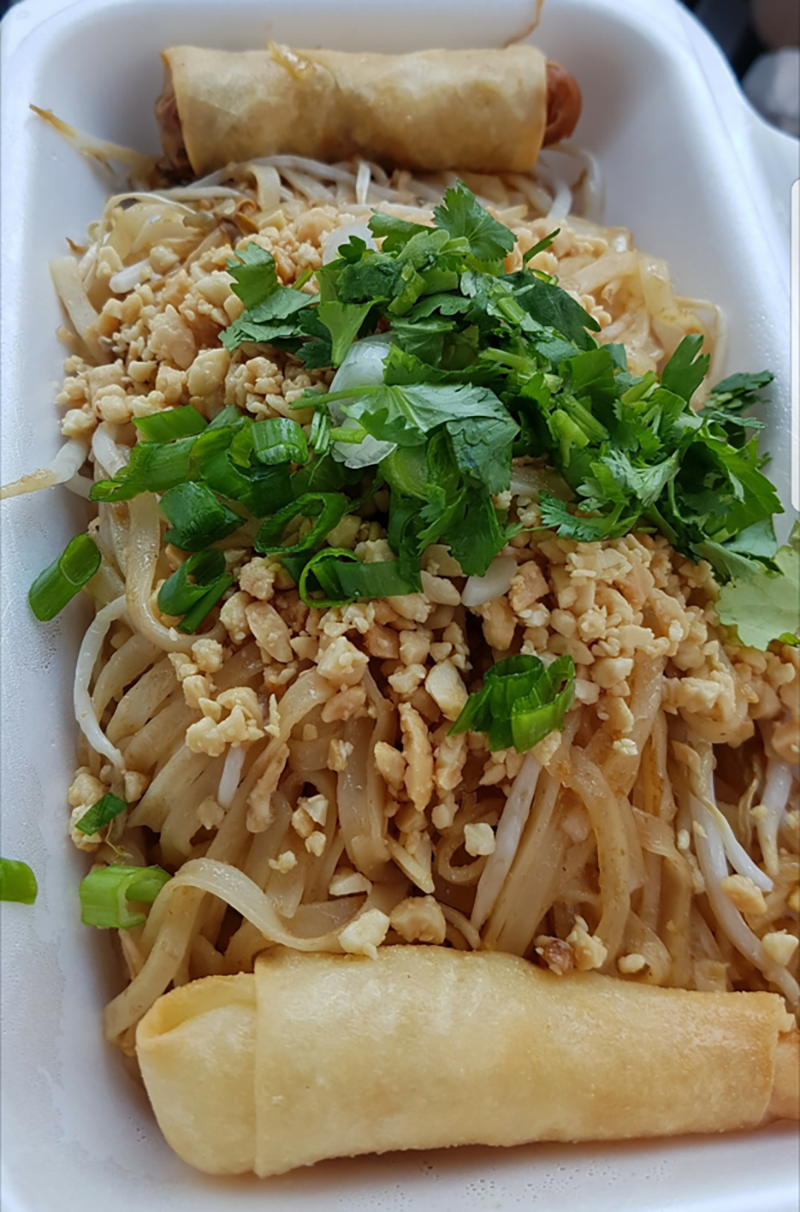 These days, she still loves rolling with it in the kitchen. Other than the crowd favourite Combo No. 1 — Pad Thai with a chicken skewer and spring roll for $14 — the menu changes regularly at One of a Thai.

“That’s one thing that makes us stick out. Other food trucks, it’s a set menu.”

Also unlike other food truck operators, Chanthalangsy has no intention of giving up her meals on wheels. Catering indoors gets her through winters but so does counting down the days until food truck season starts again.

“If I open an actual restaurant, it means more employees. Having the three of us work together is more feasible in a food truck. I just want to work with my family,” she says. “You get to know your community more. You travel, you get to go music festivals and weddings. Having a food truck, it’s more a part of the family, a part of the community.”

Terrific story! Fascinating to learn of such creativity and grit in Canada!