Star of the Show Twitter Party with Canadian Lentils!

Have you ever watched a cooking show and thought to yourself, "I could do that." Well, now it's your chance! Canadian Lentils and Chef Michael Smith have come together to create The Star of the Show! Canadian food bloggers are being asked to create a short video submission and five lucky bloggers will be invited for an all-expenses trip to PEI! In Chef Smith's test kitchen you'll have the chance to host your very own cooking show! Quite simply, it's the chance of a lifetime! 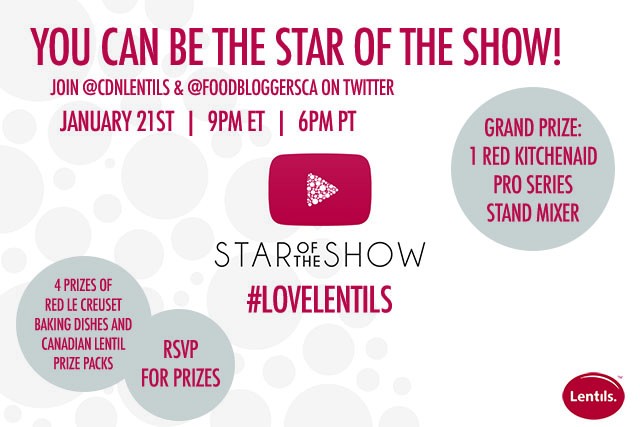 To help you with your video submission, we're hosting a Twitter party with Canadian Lentils to talk about recipe ideas with lentils, why they're good for you and of course all sorts of tips/tricks on making the very best audition video! For more information about the Star of the Show, check out LoveLentils.ca.

To be eligible to win a prize, you must RSVP (below) and tweet at least once (Original tweet, retweets do not count) during the party with the #LoveLentils hashtag. The winners will be announced throughout the party and be asked to contact Food Bloggers of Canada by Direct Message on Twitter and by answering a simple skill-testing question. Prizing is open to Canadian residents (excluding Quebec). The rules can be found here.

Super excited for this opportunity

Yeah I’m excited for the party and the prizes!

this news got my ‘pulse’ racing 😀

Looking forward to this! Not only do I love lentils, but that red KitchenAid mixer would look right at home in my kitchen!

I’m game for adding some Le Creuset to the collection.

I’m looking forward to it!

What a treat! Glad to get some tips before I throw together my audition!

SUCH A PLEASURE TO JOIN THIS, LOVE LENTILS AND MY STAND MIXER GAVE UP LAST HOLIDAY, TOO MUCH PULSING, HAHA. I do not have my own website, only twitter so I will probably good for joining the twitter party.

Have already joined the pulse pledge. Looking forward to this…

Should be a fun party.

Gah! Curses the laws here in QC. Quick question though; I can’t see the entry imformation for the cooking show. Am I still able to enter that, even if I live in Quebec?

Yes, the Star of the Show video contest is open to Quebec residents. The official rules and regulations page will appear on January 25th when the submission period begins.

Thank you! Looking forward to it! 🙂

Looking forward to the chat

I LOVE lentils. So nutritious and delicious. Looking forward to the party!

I DO love lentils! Sounds fun!

I am a lentil warrior!

all over this…..gonna learn how to prepare awesome lentil dishes this year!

This is gonna be amazing can’t wait

See you all there!

Looking forward to this one – hoping for some great recipes

Looking forward to this party! See you tomorrow!

Cant wait! Been a very lounge time since I’ve done a twitter party!

At an event tonight but will do my best to jump in the party! Thanks 🙂

I have grown up eating lentils as part of my daily Indian meal. Very very excited to see Pulse trending in the year of 2016 🙂

got my red apron on and ready to go 🙂

I love lentils. Anxious to participate to the Twitter party. Too bad Quebec is once again excluded from this contest. I know this is related to legal matters. I have read on the Net that “Unless the total prize value is less than $2,000, you are required to register your contest with the Régie des Alcools, des Courses et des Jeux.

I’m all for lentils. They’re great in soups and stews.

Let’s get this party started! 🙂

Can’t wait!! Love me some lentils 🙂

Thanks for the party.

A few minutes late to the party, but I’ll catch up.

So stoked to take part!