The Spice Box – Getting To Know Coriander (Cilantro) Seeds

Getting to Know Coriander & Cilantro is part of a monthly series here on FBC called The Spice Box.  Primarily written by Michelle Peters Jones, these articles create a spice primer for new and experienced home cooks alike! 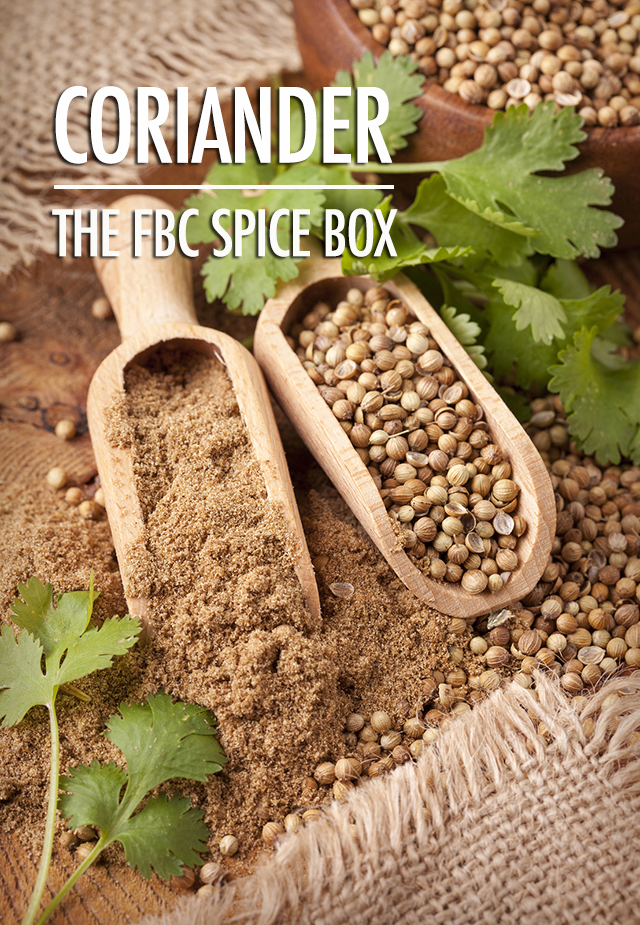 Coriander seeds and fresh coriander – also known by its Spanish name, cilantro – are staples in cuisines all over the world. Coriander is one of those ingredients that's both a herb and a spice. Coriander seeds are one of the oldest spices in the world, and are used everywhere from spice mixes and curries to salsas and burgers. Primarily a Middle Eastern and Mediterranean herb and spice, coriander has also been embraced by Asian and South Asian cuisines. The largest producers and commercial exporters of coriander are Russia, India, North Africa and (surprisingly) Holland.

The flavours of coriander as a herb and as a spice are varied. As a herb, coriander or cilantro has variously been experienced as fresh, clean, bright, and sometimes even 'soapy'. It's one of those herbs that people either love or can't stand, and studies have shown that there might be a genetic link to this. The seeds have a slightly different profile: highly aromatic, warm and nutty with a hint of citrus.

How to Grow and Use Fresh Coriander/Cilantro:

Cilantro is a surprisingly easy herb to grow in your garden, and it grows well in cooler weather. It can be started from seed or bought in a herb planter, and the best time to grow it is early in the spring (if growing outside) or late in the autumn (if indoors). It grows well indoors, and can be harvested all year round. It does have a tendency to 'bolt' or flower and go to seed during warm weather, so make sure that you keep harvesting it constantly. The whole plant is edible. Keep the roots for Thai curry pastes and the leaves as the finishing touch for all sorts of dishes. The flowers look pretty as an edible garnish as well, and the seeds can be dried to use as a spice. Cilantro also looks and tastes incredible as a micro-green and is easy to grow in that form as well. It's best to use the mature green leaves, rather than the fluffier tops or the bolted part of the herb, both of which can be bitter.

Coriander seeds come in two varieties, Indian and Moroccan. Indian seeds are golden and slightly larger than Moroccan seeds, which are a darker brown. They can be used interchangeably, as there is no real difference in flavour between them. The best way to buy coriander seeds is whole. Coriander is one of those spices that degrades fast once it's been ground, and loses a lot of its flavour as a result. Whole coriander seeds last a lot longer, and can be stored in an airtight container in a dark place.

RELATED:  How to grow your newly redesigned/ rebranded blog

Coriander seeds can be used raw for a slightly more bitter flavour, but the best way to use them is to dry roast them first. Dry roasting brings out their nutty, warm aroma, and hugely enhances the dish you're using them for. To dry roast coriander, heat a heavy-based pan on high heat, and throw the seeds in. Dry roast for about 30 seconds, shaking the pan constantly, until the spice is fragrant. Let it cool before grinding or blending into a spice mix. Coriander seeds can also be lightly crushed in a mortar and pestle and added to various recipes. When using ground or whole coriander in a curry, a simple rule of thumb is to always use twice as much as cumin, for the best flavour.

And finally, did you know that the name coriander comes from the Greek word 'koris,' which means 'bug'? Legend has it that unripe coriander smelt like stinkbugs.

A Few Recipes for Cilantro and Coriander Seeds:

Try this classic recipe for the fiery North African harissa sauce. I use this sauce as the base for my Moroccan-spiced carrot and coriander soup.

I use it in pretty much all my Indian curries and spice mix recipes, and coriander is lovely in this paneer muttar.

This delicious banh mi video masterclass by Jacqueline Pham will get your cilantro-loving tastebuds going.

What have you created with Coriander?  Leave a link to a recipe on your blog in the comments so everyone can check them out!

SUBSCRIBE TO GET YOUR FREE SPICE BOX EBOOK
You are subscribing to the FBC Food Lovers Newsletter.
You can unsubscribe any time!
Click Me
4shares