The Spice Box – Getting to Know Dill 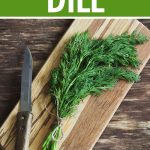 Getting to Know Dill is part of FBC's The Spice Box series, where we aim to help you build a well stocked herb and spice cabinet that takes your cooking to the next level! Dill is one of the most versatile herbs you can have in your culinary toolbox. Find out why... 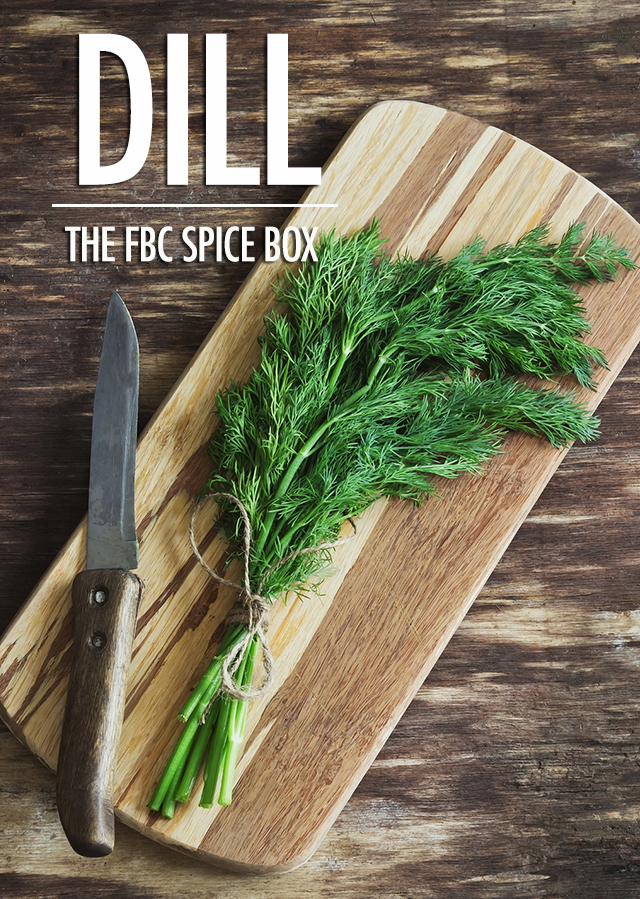 Summer is in full swing, and a lot of gardens are now producing their bounties of fruit, vegetables and herbs. Around this time of the year, my thoughts turn to canning and pickling. Dill, or dill weed as it's sometimes referred to in recipes, is the perfect complement to pickles and preserves.

What Is Dill Used For?

Besides being a beautiful addition to your herb garden, this annual, self-seeding plant is surprisingly easy to grow and can be extensively used in your cooking and canning.

Dill can be used both fresh and dry and its seeds can also be used in the kitchen. They are commonly distinguished as dill weed (the light feathery fronds) and dill seeds. The word 'dill' comes from the Norse word 'dilla' which means to lull or calm. Dill is native to Southern Europe, but is cultivated all over the world.

What is the Flavour Profile of Dill

Fresh dill has an aromatic, sharp, tangy and a very gentle anise-like flavour. Many people describe it as 'fresh green' or 'bright.' It's a distinctive taste - not a strong anise like fennel but milder. Dill seeds have a stronger, more concentrated fragrance similar to caraway or cumin, and are found in many pickling spice mixes.

Dill is not a substitute for fennel, despite coming from a similar family of plants.

How To Use Dill In Your Kitchen

Most of us think immediately of pickling when we think of dill. Dill and dill seeds are a common ingredient in many pickling spices and pickling recipes. Cucumber dill pickles are a popular condiment all over the world, and a lot of families have their own 'secret' recipes. I also like these pickled green beans that use dill.

Outside of pickling, dill can be used as a primary flavour, or as a garnish and is particularly common in Scandinavian and  Eastern and Southern European cuisines. Scandinavian countries use dill to flavour gravlax and smoked salmon. You'll find the seeds used in many Scandinavian style breads and cakes  as well as many European flatbreads.

RELATED:  Renaming and Rebranding Your Blog: What You Need to Know Part 2

Fresh dill is a lovely addition to summer salads, dressings, soups, stews, dips and sauces. It can be used as a garnish, or as a vegetable, as it is in this new potato salad.

Dill is a perfect accompaniment with fish and white meats and is one of the primary ingredients in dips and sauces. The best way to use dill is fresh, but freeze-dried dill keeps its flavour longer than dried dill. If you grow your own dill and are overrun with it, you can even try drying it for future use.

How to Grow Your Own Dill

Dill bolts (or goes to flower and seed) in hot conditions, so keep thinning it, based on your requirements. If you want the feathery herb, then keep pinching off the flowers as they grow. I have used dill flowers and flower pods straight in pickles and salads as well. Be sure to water it frequently.

Do not grow your dill next to fennel, carrots or parsley, as it can cross-pollinate.

And finally, did you know that in medieval Europe, dill seeds were used as a charm to ward off evil influences and witchcraft? Also, the most popular way of using dill, in the dill pickle, is a technique that is almost four hundred years old.

SUBSCRIBE TO GET YOUR FREE SPICE BOX EBOOK
You are subscribing to the FBC Food Lovers Newsletter.
You can unsubscribe any time!
Click Me
14shares

I didn’t know dill is used in gum — interesting! Thanks for linking to my recipe 🙂