The Spice Box – Getting To Know Fennel Seeds

Getting to Know Fennel Seeds is part of a monthly series here on FBC called The Spice Box.  Primarily written by Michelle Peters Jones, these articles create a spice primer for new and experienced home cooks alike! 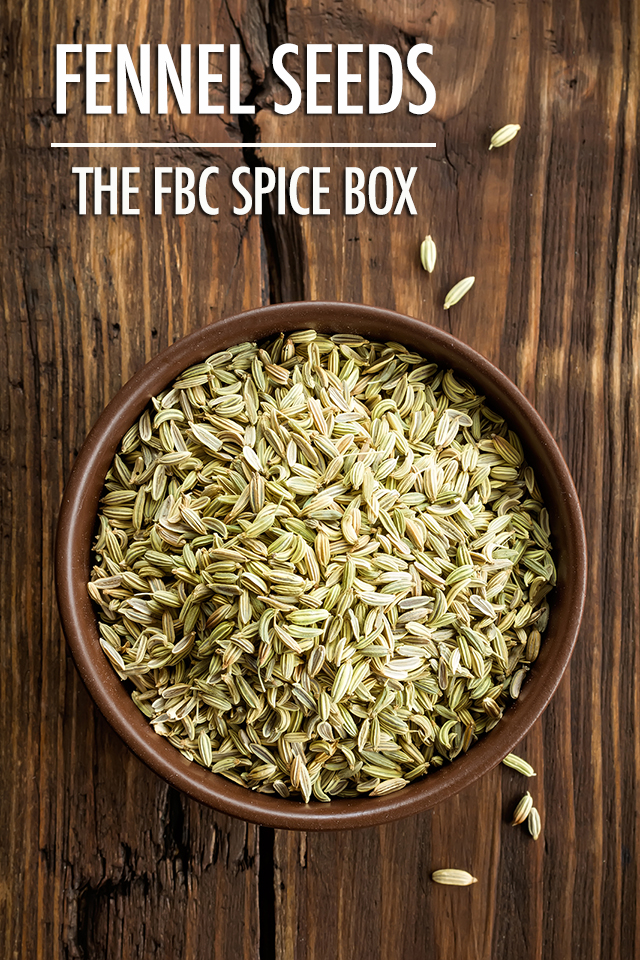 Fennel seeds are often confused with the more common cumin, anise and caraway seeds, but have a very different flavour profile. This spice, however, is very popular in a lot of cuisines, including but not limited to Indian, South East Asian, Middle Eastern, Mediterranean and Italian. Almost the entire fennel plant is edible, including the bulb, which is used as a vegetable. Fennel seeds are native to the Mediterranean coast, but are grown all over the world.

Fennel seeds start off green, turning to a greyish brown as they age. The freshest kind are pale green and are used for culinary uses. The seeds have a light, sweet, anise-like taste, very similar to licorice, and are usually used to add a warm fragrance to various dishes. Fennel is one of the ingredients in Chinese five-spice powder as well as in the Indian version called Panch Phoran. The seeds look very much like cumin but are slightly larger and greener, with ridges.

How to Grow Fennel:

Fennel and fennel seeds are surprisingly easy to grow. As it's an invasive species, in some parts of the world it's actually regarded as a weed. Fennel is a perennial and can be grown from seed. It requires full sun exposure, and you can harvest the bulbs for use as a salad or cooked vegetable. The feathery fronds are used as a tasty garnish. If you're growing it for the seeds, the umbrella-like flowers (similar to dill) mature in late August when you can carefully snip the heads off and shake the seeds into a cloth. Fennel needs to be planted away from similar plants like parsley, dill and carrots, otherwise it will cross pollinate.

Fennel bulbs are great thinly sliced in salads (try a simple fennel and orange salad with an olive oil dressing), or can be roasted or braised. The flavour is mildly anise-like, and pairs well with roast meats. Fennel seeds, as mentioned above, are an important part of spice mixes. Like all spices, fennel seeds benefit from dry roasting before use, especially if using them ground. In South Asia, they're chewed raw with sugar cubes to freshen the mouth and aid digestion after meals. Fennel seeds are also an important component of masala chai spices. You could also try them in my mom's recipe for fennel and anise spice chicken. Store the seeds in an airtight container, away from direct heat and light. Whole seeds can be stored for about two years. Discard them when they lose their pale green colour and begin to go grey.

Fennel seeds are most commonly used as a digestif and are often used to treat gastric problems, bloating and heartburn. Fennel bulbs are nutritionally high in potassium, Vitamins A and C and calcium, and are also a good source of dietary fibre. Fennel oil is used as a fragrance enhancer in cosmetics and soaps. Fennel is also one of the three spices that is used to make the alcohol Absinthe.

And finally, did you know that fennel is one of the oldest cultivated vegetables and spices in the world? Ancient Romans chewed fennel before battles as they believed it gave them courage. Roman ladies used it as a means to stop getting fat and in the Middle Ages, people chewed fennel to stop embarrassing tummy rumblings during religious services.

Try this simple fennel and ginger tea as a digestive after a heavy meal.

What have you created with Fennel? Leave a link to a recipe on your blog in the comments so everyone can check them out!