The Spice Box – Getting to Know Fenugreek

Getting to Know Fenugreek is part of a monthly series here on FBC called The Spice Box.  Primarily written by Michelle Peters Jones, these articles create a spice primer for new and experienced home cooks alike! 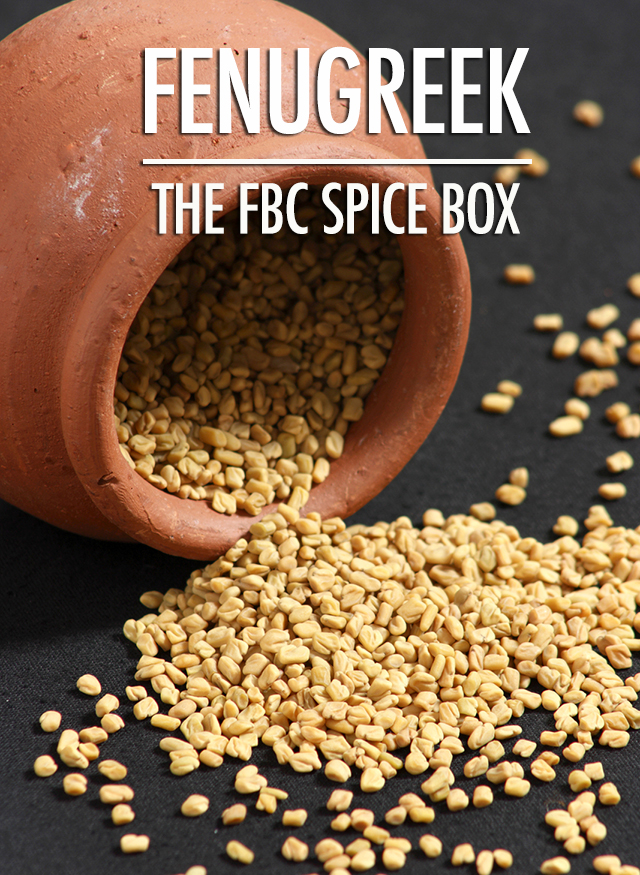 Fenugreek is not a familiar spice in Western cuisines, but has been used a lot in traditional medicines and ethnic style cooking for a long time. Fenugreek, like cilantro/ coriander, can be used fresh or dried as a herb (also known as kasuri methi) and the seeds are dried and used as a spice. When using fresh, the leaves are treated similar to spinach or other greens, and are considered to be very healthy. Fenugreek is mainly used in South Asian cuisine, and is also found in some Mediterranean and African cultures, like Turkish, Egyptian, Ethiopian and Eritrean cuisines.

Fenugreek is commonly grown in South Asian countries, with India and Pakistan being the largest producers. The plant is grown in sandy soil, and is also commonly cultivated in dried up riverbeds. It is sometimes called 'samudra methi' or 'oceean fenugreek' because of the way in which it is cultivated.

Fenugreek has a very distinctive flavour. Fresh fenugreek leaves, when used as greens, have a bright but bitter flavour. They are normally used in vegetable and meat curries, and sometimes in an Indian style flatbread called paratha. Dried fenugreek leaves are an important ingredient in several restaurant style Indian and Middle Eastern curries, and the fragrance is similar to fresh leaves, but without the bitterness. Dried fenugreek seeds are an important ingredient in several curry powders and spice mixes, and add a sweet, slightly nutty and earthy flavour that balances out sweeter spices.

How to use fenugreek:

You can find dried fenugreek leaves and seeds in most Asian groceries, as well as in  larger supermarkets like Superstore. The dried leaves are usually labeled kasuri methi. Fresh leaves can be found in the produce section of Asian and Indian grocers and supermarkets, and I have also seen them fairly regularly in Superstores and larger Loblaws right beside fresh greens like spinach and chard. Look for fresh, tender, light green leaves without brown spots on them.

There are several ways to use fresh and dried leaves and fenugreek seeds. Fresh leaves can be stirred straight into curries, and cooked gently until just wilted. Fresh leaves are also combined with spices, cooked, and then blended into a paste to use as a marinade for chicken and other meats. Dried leaves are used similar to other dried herbs, either at the beginning of the cooking process or as a garnish at the end. They add a very characteristic fragrance, and it is instantly recognizable, especially if you are in an ethnic restaurant.

RELATED:  The Spice Box - Getting to Know Cumin

Fenugreek seeds are used similar to other spice mixes. It is rare to find ground fenugreek seeds, and they are very rarely used on their own to flavour a dish. To use fenugreek seeds, dry roast them in a hot pan for about 30 seconds, stirring, until they are fragrant. Let them cool, and then add them to a spice mix, or use as directed. The toasting process releases the essential oils which intensify its earthy fragrance.

It is a good day to post about fenugreek, as it is Valentine's Day. Fenugreek is commonly used as an aphrodisiac and is considered to be a libido booster. Fenugreek leaves are considered to be high in vitamins and iron, similar to other leafy greens. The seeds are used in a variety of herbal medicines, from lowering cholesterol, to containing fevers, as a hoe remedy for diabetes, as an anti-inflammatory and in controlling acid refluxes. It is also anecdotally considered to be a good way of balancing hormones in women and as a breast enlargement aid and a common home remedy for lactating mothers. As with most herbal medicines, there is some, but not a lot of evidence of the efficacy of fenugreek, however, it is a very common ingredient in ayurvedic and other ancient medicinal system. It does have a very distinctive smell, though, and caution is recommended while using it topically.

Finally, did you know that fenugreek is one of the ingredients used to make fake maple syrup?

Recipes That Use fenugreek:

It is an important ingredient in Indian style curry powders or Madras curry powder. It is also used in tandoori spice mixes.

Dried fenugreek leaves are what give butter chicken its classic fragrance and taste.

What have you created with Fenugreek?  Leave a link to a recipe on your blog in the comments so everyone can check them out!

SUBSCRIBE TO GET YOUR FREE SPICE BOX EBOOK
You are subscribing to the FBC Food Lovers Newsletter.
You can unsubscribe any time!
Click Me
384shares

I enjoyed this article, Michelle. I first started using fenugreek about 15 years ago in a potato recipe I found in one of Nigella Lawson’s cookbooks. It calls for panchphoran, a spice mix that includes fenugreek.

I think I know what I’m having for lunch today!

Green sorrel with lentils or pulses