The Spice Box – Getting to Know Sage

Getting to Know Sage is part of a monthly series here on FBC called The Spice Box.  Primarily written by Michelle Peters Jones, these articles create a spice primer for new and experienced home cooks alike! 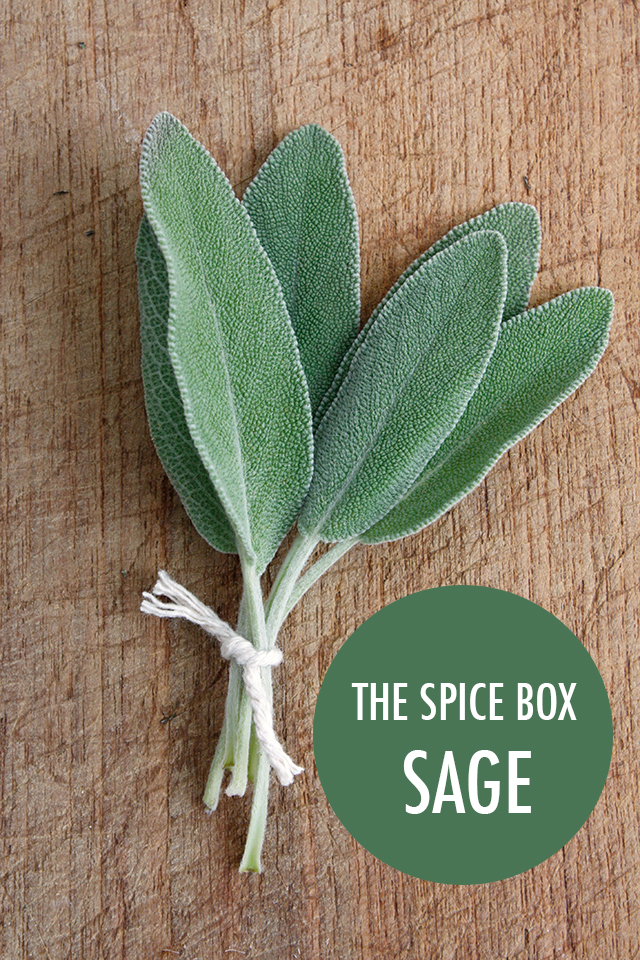 With Thanksgiving almost upon us, The Spice Box focuses on a classic herb pairing with your turkey and its stuffing, the beautifully evocative and aromatic sage.

Commonly cultivated in varieties like purple and red sage, it is an herb that is used a lot for culinary and medicinal purposes. There are quite a few varieties of sage in the world, but surprisingly, only a few are used in the kitchen. The majority of sage, being an evergreen herb, is grown as decorative foliage. It is mainly grown in North America and in some parts of Europe. It belongs to the mint family, and is mainly grown commercially for culinary purposes.

Sage, with its distinctive ‘fuzzy’ gray-blue green or purplish leaves, is an incredibly aromatic, strongly flavoured herb, with a deeply woody and slightly astringent, bitter note.

How to grow and harvest sage:

Sage, as a culinary herb and as a hardy perennial, is remarkably easy to grow and look after. It can be grown in pots, or directly in the ground. While it can be successfully grown from seed, most varieties are better grown from a cutting. You can start the growing process indoors, and transfer outside once spring comes along. It needs well-drained soil, and plenty of water, especially when just starting out.

Leaves can be picked at any time, and the smaller the leaves, the more tender they are. Sage can deal with heavy pruning at the end of the growing season and you can repot and bring the herb indoors during winter.

If you prefer to harvest the leaves at the end of summer, you can cut off large bunches, and hang them upside down in a cool dry place to preserve. You can also dry them in the sunshine, and coarsely crush them. Place them in airtight containers, or securely closed ziplock bags.

How to use sage:

Sage is one of the most popular herbs used in North American cooking and can be used both fresh and dried. Unlike other herbs, dried sage tends to be more intense than fresh leaves, so if you are substituting one for another, it is best to use less of dried sage.

With its deeply intense flavor, a little sage can go a long way. It is commonly paired with poultry like chicken or turkey, and is also used with other proteins like lamb and pork. It releases its aroma when crushed, rubbed or sizzled, and is one of the most popular herbs used for stuffing a turkey. Sage can hold up to long cooking times, which makes it invaluable for simmering in soups and stews. It can also be successfully roasted, with its slightly bitter notes adding wonderful contrast to richer dishes. It’s s staple in stuffing, and can also be infused into butter to make a simple sauce for fresh pasta.

Sage is also occasionally used for medicinally purposes, with sage tea, in particular used to cure ailments like fevers and liver problems.

And finally, did you know that the word sage is derived from the Latin word, ‘salvia’, which means ‘to save’? It is called this because ancient Romans and Greeks believed that sage could ‘save’ people from being poisoned (for example, by snakebite) and also that it rejuvenated the body and mind.