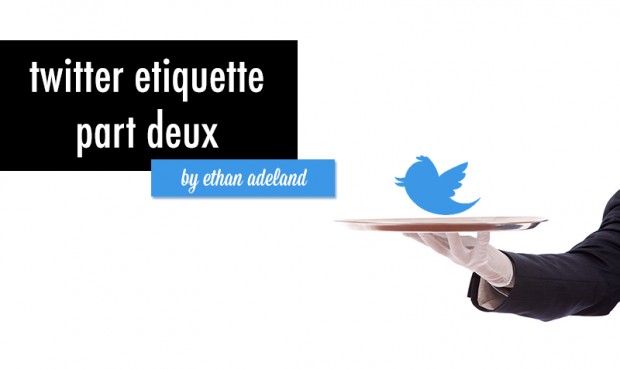 We covered 5 Ways to Be a Better Twitter Citizen a while ago and we're back with 5 more important Twitter etiquette lessons we should all know or be reminded of.

Twitter is at our fingertips. It's so easy to put something out there and it's even easier to put it out there without giving it much thought. With the number of people using Twitter on their phones and the ease in which people can snag a screen shot of a tweet, poor decisions can live on forever, even if it's been deleted.

Think twice and then think again before you put something out there. If you don't, you might end up regretting it forever.

Twitter has a maximum of 140 characters in a tweet but that doesn't mean you have to use it all up. In fact, using approximately 115-120 characters allows your followers to re-tweet your golden nugget without having to modify your original tweet. This will lead to your stuff getting out there more.

3 - Give Credit Where Credit is Due

Karma also exists in the Twitterverse. If you found something that is of interest while surfing the web, there is no reason not to give the author of that post or publication a little love. Not only is it the right thing to do, but that's how relationships are built. Scott Stratten of UnMarketing often uses unicorns dying at the hands of irresponsible use of social media to illustrate a point. Allow me to add another one, if you tweet someone's article or post without an @ mention, there is one less unicorn in the world.*

I enjoy a silly hashtag as much as the next person. I have been known to tweet from my personal account one long hashtag along the lines of #OMGBaconMakesTheMorningSoMuchBetter. Maybe I am wrong, but I believe those types of tweets have their place from time to time. However, there are also tweets such as "This #chocolate #chip #cookie is so #NomNom. #Baking #Kitchen #Blogging #Food." In my experience, this type of tweet indicates to the world that you're more interested in people randomly finding your tweet in a #cookie search and following you than you are in interacting with your actual followers. If you want people to follow and interact with you, provide them good content!

If you're about to host a summer backyard bash, the neighborly thing to do is to let your neighbor know it might be a bit louder than usual. And you know what, your neighbor will have no problem because they appreciated the heads-up. Now, why can't we all do that when it comes to Twitter parties? With the increase of Twitter parties, it's getting louder online, but yet I see only a handful of people sending out a quick tweet along the lines of "I'm participating in Twitter party #ABC tonight, so I apologize in advance for the extra tweets in your stream." Simple, considerate and faster than actually walking over to visit your neighbor!

This is more for those that host Twitter parties, but some parties insist on using CAPS for their questions and then they get re-tweeted and everyone's twitter streams is nothing more than people yelling at each other. Maybe I'm in the minority, but for me, I lose my kind neighborly demeanor when I see that. No friendly invites for a swim in my pool or fresh baked cookies is the result of CAPS.

*FBC Editors Note – As always, no unicorns are ever harmed in any of the FBC social media activities.
This article was written by Ethan Adeland, co-founder of FBC and author of Feeding Ethan.  He is a writer, iPhone picture-snapper, traveler and experimenter in the kitchen.  He currently resides in Vancouver, BC.  Twitter: @EthanAdeland

I love a short and sweet article that offers useful info. I enjoyed this one, Ethan. I come and go from Twitter, which probably qualifies me a flaky tweeter. But better some than none, I guess.

Nice piece with some useful common sense in this evolving new world. Thanks

Nice advice Ethan… completely agree on the first 4 – hadn’t thought about a couple, so appreciate the insight. I do caps, on occasion, purposefully – so, like the #sillyhashtagsfromtimetotime my caps on the rare occasion also have a place, at least, I think so. In any case, I learned something new today from you, and appreciate it.
🙂
V

So well written, Ethan. Funny, but you also made ALL good points. (I so wanna add a hashtag to this comment! )