Blogging for Good: Leveraging Your Site To Better Your Community

There are many reasons to write a food blog. Some reasons include the love of sharing recipes, to have a showcase for photography, or for an income stream. But have you considered using your blog as a force for community good? Today Tiffany Mayer discusses the philanthropic side of food blogging and the profound impact it can have on your community and on you professionally. 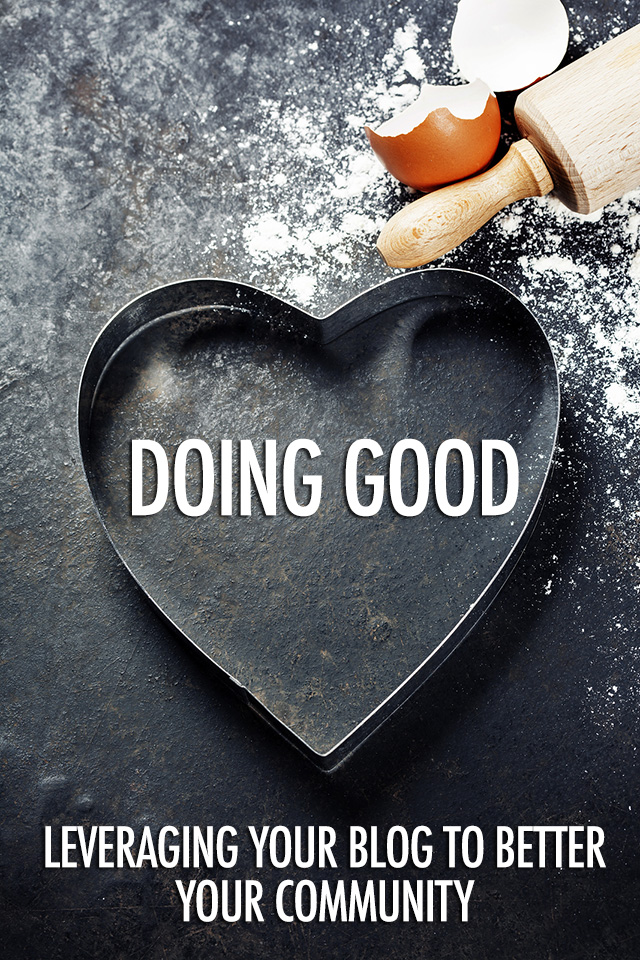 This might sound familiar to those who attended FBC2016 in Toronto in October: Claim your port.

They’re three small words, offered by Joel MacCharles and Dana Harrison, that when put together — and implemented — can have huge impact on your blogging. They mean that to build your blog, sometimes you have to get off your blog.

For the dynamic duo behind the hugely popular Well Preserved site and Batch cookbook, that’s included hosting a series of food swaps called Home Ec. A date, time and place was set and people showed up to trade home preserves with each other.

More than jam, pickles and cured meat changed hands, though. Friendships formed and a home preserve community was built to come together again and again.

Leveraging your site to better your community is a tangible way to have impact wherever you live. It satisfies that compassionate instinct we have to help and connect with others.

It turns out that food blogging and philanthropy are a perfect pairing, notes Mardi Michels, the beneficent blogger behind eat. live. travel. write.

“A lot of community organizations and charities are small in terms of their reach both within the community and on social media,” she says. “A lot of smaller organizations rely on volunteers to keep things ticking over, so one way that food bloggers can help … is to leverage their own reach to spread the word about campaigns.”

Blogging for social good can have profound professional impact, too.

Theodore is a full-time lawyer and food lover, and part-time blogger. When she started Chew Street a little over a year ago, she envisioned more than a simple recipe site. Her blog would be a social enterprise, raising money through intimate events and sponsored posts to benefit charities and causes important to her.

She’d already hosted food events for friends to replicate her own experiences from travelling. Theodore was also the person to whom her friends turned for advice on cooking and dining out, so merging the two in an enterprising endeavour seemed a no-brainer. She took her event planning cues from successful shindigs she enjoyed in her own city, and connected with those hosting her favourite tickets to learn from them directly.

She’s organized wine education and financial planning sessions for women, connecting with commercial partners RBC and The Wine Shop for the event. Proceeds were donated to a legal program for families with children receiving care at Toronto’s Hospital for Sick Children.

Theodore has supported local school breakfast programs through Chew Street events, too. Only $1.50 buys a meal for a child so it’s easy to find charities where we can have big impact as bloggers without needing to make huge donations of time or money.

Most recently, she’s curated a series of gift packs for purchase through her site to benefit Yonge Street Mission.

The blog itself helps Theodore keep in touch with and continue building the Chew Street community between events. And in time, she would like to do sponsored posts, donating the proceeds of those to her favourite causes.

“Why would I bother, if I wasn’t at some point in time trying to have some kind of social impact on things that are important to me,” Theodore says about her reasons for blogging to better her community. “I’m at a stage in my career … I’ve got a good work-life balance that gives me some spare time where I can afford to spend time on things that make me happy and that I think are important, and to use a cheesy reference, to feed my soul.”

Advice: “I don’t think you have to give up your job or become a saint or give it all away to charity every time. In your everyday life — I like to eat out, I like to taste wine — there are things you can do … (that) can impact and help people without any effort whatsoever.”

You can learn more about what Charlene does from my interview with her on Grub: A Podcast about Food.

Sacramento-based Rodney Blackwell is a self-professed cheeseburger addict who started his blog to spread the gospel of good hamburgers.

What began as a simple burger joint review site morphed into relationships with chefs working their magic with a patty — or two or three — and buns. And that eventually grew into the development by Blackwell of one of his city’s most popular annual food events, Sacramento Burger Battle.

It’s described as “an epic charity burger cook-off and tasting event” and it raises money and awareness for The Crohn’s and Colitis Foundation of America. It became a cause close to Blackwell after his daughter was diagnosed with Crohn’s.

Blackwell built such a popular, well-run event that it has become one of Sac’s premiere food spectacles. He was also able to pass the reins to the foundation when it became too big for him to continue organizing and operating the Burger Battle himself.

Advice: Succession planning is important if you want an event to live on after you’ve moved on. Good organization is key to building something longstanding that will continue to attract participants and crowds. With that nailed, you can seamlessly hand over the job of running the show to someone else when you can no longer do the job alone.

Michels is a philanthropic force with her nearly eight-year-old blog, eat. live. travel. write. She’s helped spread the word for many charities and causes, including National Cupcake Day for the SPCA, and Community Food Centres Canada #myfoodhero campaign.

But she’s perhaps most well-known for her involvement with Jamie Oliver’s Food Revolution, a connection that came to be after Michels started blogging in 2010 about her boys’ cooking club at the school where she teaches. Two years later, Michels became a Food Revolution Ambassador because she saw the impact her classes were having. She hoped a more official role would further help promote the importance of teaching kids to cook.

“Blogging is a more tangible way to help out … beyond just donating or even volunteering time,” Michels says. “It helps community organizations expand their reach and for me, it’s a way to show my audience some of the causes that are important to me.”

Nearly seven years later, she still writes weekly about her adventures making food with her students. In the meantime, she’s also put the network she built through food blogging to use by asking chefs to work with the boys. In return, she shares the experience on eat. live. travel. write.

“As an educator, I have a responsibility to do something beyond teaching the boys French as a Second Language,” she explains. “Teaching them cooking was a choice I made, at first selfishly. We have to offer a club after school so why not make it something that I really love doing myself? But it’s honestly the best part of my week these days. Sure my blog is a repository for food stories and recipes but these cooking sessions have become some of the most important food stories I am telling each week.”

Not only have her efforts helped a generation become food literate, Michels has become known as an authority on teaching kids to cook. (She’s also met Jamie Oliver more than once.) That time, effort and support of the cause has landed her a cookbook deal. Look for her French food kids cookbook in September 2018. In the meantime, keep reading about her Petits Chefs’ adventures on her blog.

Advice: Choose your causes wisely. “I think the biggest trap bloggers can fall into is to post about everything, attend every event and try to cover everything,” Michels says. “Choose a couple of causes or campaigns that are really meaningful to you personally and try to connect with those on social media. Find out who’s responsible for media outreach and see how you can help out. It might just be writing a post. It might be attending an event and covering it on social media. It might be volunteering your time. If it’s meaningful to you and you write about it, that will resonate with your readers.”

How about leveraging more than 2,300 food blogs for social good? It's what FBC does every day. What started as lark over dinner to create a place for Canadian food bloggers to network has grown not only into a organization mandated to support and promote Canadian food bloggers, it's also turned into an incredible community in which bloggers support each other by sharing knowledge, a friendly word, and the work of their fellow FBC members.

FBC has also brought bloggers out from behind their computers to meet face to face at the organization's annual conference, and through FBC-supported and sponsored events. Many regions have their own local FBC chapters whose members converse regularly in Facebook groups and meet for coffee, potlucks and cookie exchanges.

Let's not forget the philanthropic work that FBC and its members have accomplished, including partnering with Toonies for Tummies, Food Banks Canada, KitchenAid Cook for the Cure and Food Revolution Day on social media and in blogging campaigns to raise awareness for all these initiatives. They have partnered with Mealshare for the last few years as their charity of choice providing media support, promotion, blogging ambassadors and volunteering to serve school breakfasts and lunches with the Mealshare crew at schools around Vancouver.

Advice: Connecting happens both on and offline. Use any and all opportunities to build your network and offer support to those within it.

Blogging for Good: Leveraging Your Site To Better Your Community was written by Tiffany Mayer, a freelance journalist and author of Niagara Food: A Flavourful History of the Peninsula’s Bounty (History Press, 2014). She blogs about food and farming at eatingniagara.com. You can also listen to her newly launched food podcast, Grub.

I have been thinking of creating a food blog, on and off. If I maintain a blog I would like to focus on nutritious food, beautifully presented. Target audience would be timid home cooks; those needing to watch their food intake. There seems to be so much that is being on the media now. I am looking for some advice on starting; maintaining regular output; avoid redundancy in terms of content. Any bloggers on this forum I can approach?

Hi John
If you need help starting a food blog I’d suggest checking out our Blogger Resource section for over 300 articles on food blogging! If you decide to start a blog and you’re in Canada you can join our membership community and have access to our forum. 🙂