As part of the Canada 150 celebrations happening this year, we'll be exploring Canadian food from coast to coast all year long.  In our Canada's Chefs series, Tiffany Mayer will be profiling Canadian Chefs from every province embracing Canadian cuisine.  This month she interviews Ontario's Shawn Adler of Pow Wow Café, whose fusion Indian tacos serve as a gateway to First Nations' culture.

Ask a chef why they wanted to helm a kitchen and you’ll find a common thread in their stories.

They were the child tugging at their mother’s or grandmother’s apron strings as she chopped, kneaded and stirred. If not, they needed a job as a teenager and took the first one they found, washing dishes at a local haunt.

Or they were like Shawn Adler and signed up for cooking class in high school on a lark.

“I was a real pothead and took it as a joke. I thought it would help with the munchies,” Adler, 37, recalls with a laugh.

Turns out, the joke was on him. At 16, Adler found cooking was more than a way to quell his weed-induced hunger pangs. It was his calling.

Teacher and mentor, Pierre Oger, recognized Adler’s talent and eventually stopped asking for volunteers to chop vegetables for the meals his class prepared for the school cafeteria. He assigned the job to Adler instead, knowing it would be done with care and precision.

“I just excelled over the other kids,” Adler says. “I really enjoyed it. It was physical and creative. It was an art, but not a fine art.”

That led to a summer job there and eventually studies at Stratford Chef School before Adler opened his first restaurant, Aasmaabik’s Bakery and Bistro, in Peterborough when he was 23.

Still, it wouldn’t be true to say that his childhood didn’t play some role in shaping his career. A self-described “Jindian,” Adler is the son of a Jewish father and Anishinaabe mother. He loves gefilte fish and matzoh ball soup is a comfort.

But he was also “the brownest kid” growing up in his hometown of Orangeville and resented spending Sundays driving to Brampton for Hebrew studies while his friends went fishing.

“Growing up, that was life. I didn’t realize I was terribly different from people until I went to school. Then I realized other kids believed in Santa Claus.”

His mother provided the perfect counter to it all. She immersed Adler and his four siblings in her own culture by taking them to powwows throughout southern Ontario every summer.

The dancing, drumming, Indian tacos, fry bread and bologna, and corn soup were revelations and staples of the Adler family weekend roster. Adler got to play with children his own age and was called by his Ojibway name, Aasmaabik, which means The Face of the Rock.

Those Indian tacos really struck the future chef, however. The bannock, or fry bread as Adler calls it, that was stacked with beef or venison chilli, iceberg lettuce and cheddar fast became one of his favourite foods.

“I remember eating as much as I could in the summer at powwows and that’s it. My mom made it sometimes but it was a special occasion,” he says.

About 15 years ago, the recipe changed with the addition of sour cream, which Adler chalks up to the Taco Bell effect. And it would be the recipe he’d ultimately hang his own hat on with his latest venture, Pow Wow Café, which he opened last October in Toronto’s Kensington Market.

Pow Wow Café has allowed Adler to play with a food he says is distinctly Canadian, bringing to life the ideas he’d conjure while serving more traditional Indian tacos from his chip truck at summer music festivals.

At Pow Wow, he serves the brawny beef and vegetarian chilli versions he’s been shelling out from his truck since 2003. They’re embellished with lettuce more strident in looks and taste than pallid iceberg, organic tomatoes, cumin, cilantro, popcorn shoots, beets and sometimes edible flowers.

But there’s also a hefty jerk chicken rendition and one with smoked pork. He’s used his fry bread, sliced in a cross-hatch to lap up the flavour of its toppings, as a vessel for serving duck confit with wild rice and cranberry jam. Others have been loaded with pickerel, fried egg, mushrooms and Brussels sprouts, or beef bolognese with basil and mozzarella.

That boundless versatility is the beauty of fry bread, which was born out of necessity when government rations overrode traditional diets with shares of flour, fat and sugar for Indigenous families. They’re a blank canvas when put in front of a chef like Adler.

“You name it, bread is bread. If you’re conscious of that, you can put anything on top within reason,” he explains. “It’s fusion but not like disorganized fusion. I’m not taking mango and venison. They don’t belong together. There are ways to make things work.”

Pow Wow’s menu fills a void that Adler couldn’t help but notice in Toronto’s otherwise diverse dining scene. His Indian tacos are more than a novelty to eat, though. 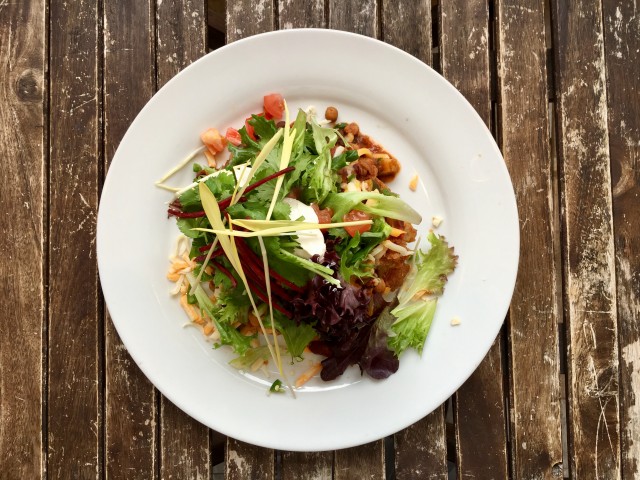 In Truth and Reconciliation Canada, they serve as a gateway to First Nations' culture, and can inspire conversations we might not have over other meals. Adler’s own mother, grandparents and other family members attended residential schools.

His food has also made him a bit of a poster boy for Indigenous issues, with Toronto media seemingly having him on speed dial to talk about everything from the café to the idea of creating an Indigenous business district in Toronto.

“It certainly wasn’t my goal,” he says about his tacos being a political statement. “If that happens, if it creates awareness of Indigenous food, that’s wonderful. But I’m just a restaurateur making a good food product that isn’t well-represented.”

Perhaps fittingly, he’s doing it in a neighbourhood that was once predominantly Jewish, and one he visited a lot as a child. Pow Wow is the sixth kitchen Adler runs. His Flying Chestnut Kitchen in Eugenia, which is home, is his flagship. Bezhig, which means One in Ojibway, is his creative outlet where he opens one day a month in Peterborough to cook and serve a “refined” multi-course course menu entirely on his own. There’s his chip truck and a cafeteria he oversees, too.

But as the father of two sits in the cosy dining area of Pow Wow and looks toward Augusta Avenue, he smiles as he talks about the prospect of adding a seventh.

“I joke I’m going to open Latke Latke next door so there’s both of me here.”

Canada's Chefs: Shawn Adler of Pow Wow Café was written by Tiffany Mayer, a freelance journalist and author of Niagara Food: A Flavourful History of the Peninsula’s Bounty (History Press, 2014). She blogs about food and farming at eatingniagara.com. You can also listen to her newly launched food podcast, Grub.

I would love to visit this restaurant next time I’m in Toronto!

Those of you in Kitchener-Waterloo can check out Shawn’s food at the upcoming Feast for the Senses at the Kitchener-Waterloo Art Gallery. He’s preparing a 5 course tapas-style tasting with complementary beverages all inspired by the work of Kent Monkman’s “The Four Continents”.

That was such an interesting read! Fascinating to read about his journey to becoming a chef and the role he has now as a gateway to First Nation’s culture!

Love it. Kind of an amazing example of someone who is distinctly and uniquely Canadian! Thanks for introducing me to Shawn!

Shawn Adler’s foraging adventures are a CBC gem – informative, beautifully produced and graced by Shawn’s inviting appearance and clear articulation. Foragers ourselves all our long lives, we find it so satisfying to experience again the sort of natural discoveries we have loved.
Have we missed Shawn foraging for nuts: butternuts, beech nuts and hickory nuts and walnuts for pickling?

Pow Wow cake recommend to us by friend and it was the first place we hit when visiting Toronto. The food is AMAZING. We loved the tacos, the corn soup is a thing of beauty with burning sage leaves on the plate and the dessert disappeared in a matter of minutes. And Sean is so king and so generous. He was our u official guide to Toronto making receommendations each of the two times we visited Pow Wow during our 3 day stay. Thanks for the great memory Sean and great food! I also love that they sell products of other indigenous people and was able to scoop up some beautiful earrings made by Skye Paul.

So glad you had a great time there Nicole! Thanks for sharing it with us 🙂

Shawn Adler’s foraging videos are a CBC Triumph. Adler is a charming star giving most interesting facts about foraging for, and then cooking with delicious natural foods. I was blessed by having a grandfather with Shawn’s approach to the richness around us. Memories of watercress sandwiches and soups, puff ball fungi fried in butter, choke cherry jelly, dandelion salads and wine, wild leeks which I adored raw with warm bread and salted butter ( don’t expel breath close to the family until you’ve brushed tour teeth a couple of times with pepsodent!) Many thanks, Shawn, and also to the crew who bring you so invitingly to us.