This month I'm diving into a couple of  Double IPAs (also known as Imperial IPAs) that are my top picks in the Maritimes. These are stronger and hoppier variants of IPAs (see my article on some great east coast IPAs)  that usually have an alcohol content from 7.5 to 10 percent according to the BJCP (Beer Judge Certification Program) style guide. This style is relatively new and originated on the west coast of the United States in the 1990s.

These beers are what I like to sip when I have barbeque or on some of those cool evenings around the campfire.

Boxing Rock Brewing opened in the small town of Shelburne, Nova Scotia two years ago and their Vicar's Cross quickly became one of Nova Scotia's most sought-after craft products. Production increases, including a doubling of their brew house size,  eased shortages and made it more readily available.

Vicar's pours dark amber with a nice off-white head with a lot of retention. It has a great aroma that's fruity and hoppy. The taste is pine and hop resin with some light floral notes followed by sweetness and a dry finish. Very easy to drink, which is somewhat surprising given the ABV; it's masked by the flavour profile. The carbonation is medium and seems a bit less dry than average IPAs.

It's a great beer that's a benchmark for commercial beers in Atlantic Canada. 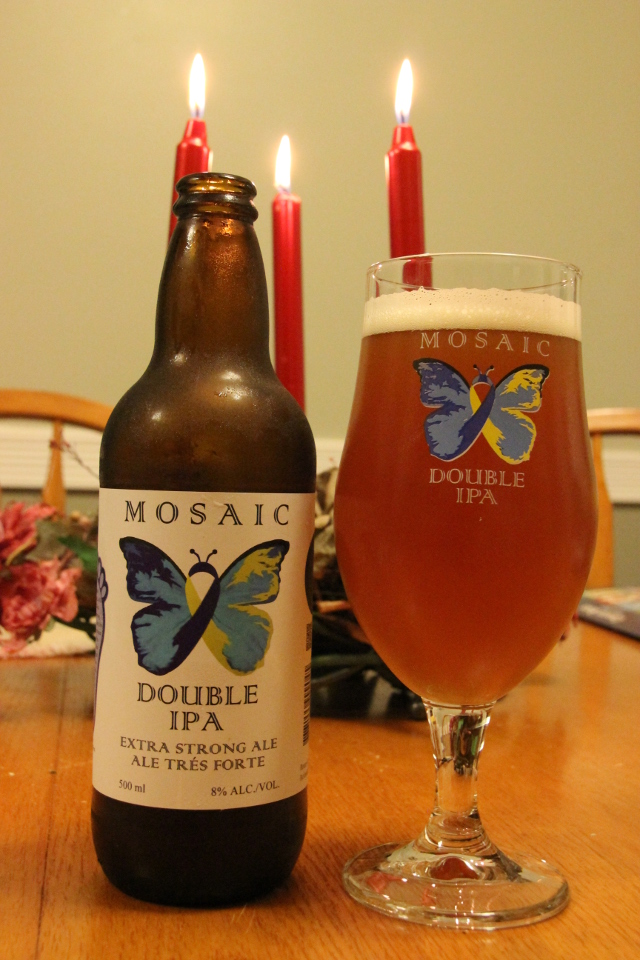 Bad Apple Brewhouse sits in the heart of the Annapolis Valley and has racked up an impressive amount of awards including Brewery of the Year in 2014 (Atlantic Canadian Brewing Awards). Their Mosaic Double IPA is very personal to the brewer. His son has Mosaic Down Syndrome, so Bad Apple uses the somewhat uncommon Mosaic hops and the proceeds go to Down Syndrome Society of Nova Scotia.

The beer is an amber in color and is nice and clear. It has a thin head that mostly dissipated. I can smell the aromas immediately: strong hops, fruity and piney. The taste is complex to say the least. There is hops, floral, resiny and fruity. It has a bit of sweetness and a nice dryness that lingers. It has a good amount of carbonation with a medium mouth feel.

This is a strong beer but very enjoyable.

Check out all our Canada's Craft Beer articles.