This week's Canada's Craft Beer post comes from our Western Canada craft beer guy, Joe Wiebe as he introduces us to some great craft beers in cans.

I remember the summer of 2007 as the “Red Racer summer” because that was the year the Central City brewpub in Surrey, B.C., began selling its Red Racer IPA and White Ale in distinctive green and yellow cans. Both raised the bar in comparison to other IPAs and Belgian Wits in the B.C. market at the time, but it was also the packaging that caught people’s attention. Craft beer in a can? It seemed contradictory to many who presumed that glass bottles were simply the best way to store beer.

In fact, by many standards, cans are the best way to package beer. They keep out both light and oxygen, which are major culprits in spoilage. Another benefit is the environmental footprint: it takes a lot more fuel to transport heavier bottles—both when full and empty. Plus, the recycling process for aluminum uses far less energy than for glass. (However, the environmental costs of extracting aluminum from the ground in the first place might cancel out those benefits.)

The idea that beer in cans does not taste as good is simply not true. Cans are lined with a water-based epoxy barrier that means the beer never actually touches aluminum. And remember, draft beer is stored in metal kegs, too. Most people don’t complain that beer served at a pub tastes metallic.

Cans are ideal for outdoor activities such as camping, hiking and golfing (don’t leave your empties in the great outdoors, of course!). More and more craft breweries are choosing to package at least some of their beers in cans. A mobile canning company has just begun operating in B.C. to help smaller breweries that do not have enough space in their facilities for a permanent canning line

Here are a couple examples of great B.C. craft beers packaged in cans that are available throughout Western Canada.

Kelowna’s Tree Brewing offers this unique take on the German Weissbier style. It pours a rich, cloudy, orange colour with a fluffy head of foam. A big aroma of sweet pineapple makes the first sip very enticing. Taste-wise, the pineapple shows up hand-in-hand with the Hefeweizen yeast’s typical banana and clove characteristics, making for an interesting twist on the original. 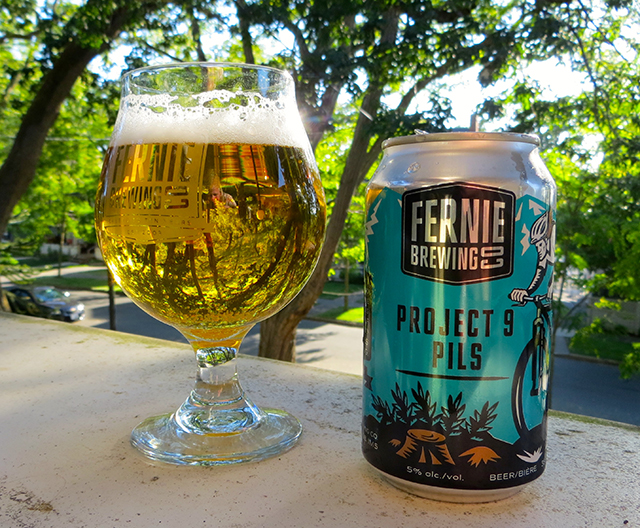 This recent new release from Fernie Brewing has already won the People’s Choice Award at the Okanagan Fest of Ale as well as a silver medal at the Calgary BeerFest. It is a well-balanced, authentic German Pilsner with some added wheat malt. It pours clear and golden with a smooth body and a crisp, dry finish that will ensure it earns a regular spot in your beer cooler.

Another dozen or so B.C. breweries package some or all of their beers in cans. Some of my favourites include: Bomber Brewing, which opened earlier this year as part of the tidal wave of new breweries in B.C.; Penticton’s Cannery Brewing; Central City Brewing’s Red Racer series; Lighthouse Brewing’s Siren Red Ale; Nelson Brewing’s all-organic lineup; Steamworks Brewing’s Pilsner and Pale Ale in single 500-ml cans; and the Moon Under Water brewpub’s first canned release, Lighter Side of the Moon.

Joe Wiebe, the Thirsty Writer, is one of Canada’s busiest beer writers. Based in Victoria, he has followed British Columbia’s craft beer scene closely for more than 20 years. His book, Craft Beer Revolution: The Insider’s Guide to B.C. Breweries, was a B.C. bestseller for 2013. He hosts beer tastings/seminars and as appeared on television and radio as a craft beer expert. A freelancer for 15 years, he has written about craft beer for a wide variety of magazines, newspapers and websites. Visit www.thirstywriter.com and follow him on twitter at @ThirstyWriter.