Styles are a system for categorizing and comparing different beers. The archetype on which a style is based is sometimes a historical city beer (London porter, Berliner Weisse), a tradition shared by a group of brewers (abbey dubbel), or the prominence of a particular ingredient (hops in west coast IPA; coriander and citrus in Belgian wits). But in a few cases, like hopfenweisse, they are just invented in a flash of creativity.

The critical moment came when G. Schneider & Sohn's Hans Peter Drexler and Brooklyn's Garrett Oliver decided that the best way for them to collaborate on a beer would be to fuse Schneider's distinctive wheat beer with the American's proclivity for brewing hop-forward beers.

Does hopfenweisse mean more than the sum of wheat beer and hops? Is it different than the American wheat I wrote about last month? I think so.

To me it's not a hopfenweisse unless the hop flavours are built on top of that distinctive Schneider-weisse mix of banana and clove esters.

As well as the original (Schneider Weisse Tap 5 Schneider X Brooklyner Hopfenweisse) there are several excellent homages and, for whatever reason, many of them are made by breweries in Canada. We have two to discuss today, but if you can't find these, keep an eye out for Shawinigan Handshake by Trou du diable and Wag the Wolf by Beau's. 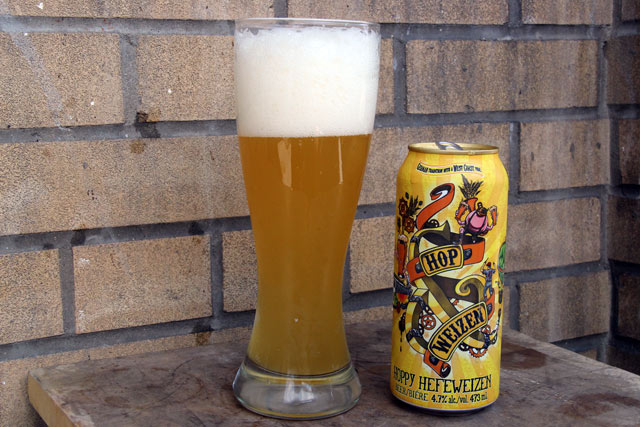 Now that they've closed the Beer Academy, Mad & Noisy Hop Hefeweizen is my favourite beer brewed by Molson's craft beer division, which also includes Creemore and Granville Island. It's a cloudy light yellow with a bright white head that falls fairly quickly. The aroma combines the expected clove and banana with citrus fruit notes from the hops. The flavour is a nice balance between slightly sweet wheat notes and cleansing citrus peel bitterness from the west coast hops.

The S.S. Hopfenweisse from Les Trois Mousquetair is a hazy, vibrant yellow-gold. It has the sort of head that seems to float foam on top of foam and leaves the sides of the glass frosted with a remarkable amount of lace. The aroma is powerfully fruity (unleashed as soon as the cork is pulled) with a mix of banana, tropical fruit and a touch of pine. Grapefruit and pine hop flavours occasionally allow brief glimpses of the subtler wheat notes. The carbonation is light and subtle enough to stay out of the way of this fascinating flavour combination.

In fusing the attributes of its two parent styles, hopfenweisse keeps both of their hot weather suitability. If I had to decide, I'd call on the Mad & Noisy for the heat of a summer afternoon and keep the LTM for the transition into a cooler evening.

Check out our Summer Flavour Trend Report: Beer Beyond the Glass  for all the unexpected ways beer will be popping up in your food this fall and winter with Dana McCauley!

If you want more great Craft Beer suggestions, be sure to subscribe to The FBC Food Lovers Newsletter.  Twice a month we'll be featuring great posts from FBC members, mouthwatering recipe ideas, delicious places to eat, as well as occasional tasty offers from some of our partners.

And between now and August 24th we will be giving away a Delta Faucet to 8 lucky newsletter subscribers.  Two per week to be announced in our August 3rd, August 10th, August 17th and August 24th newsletters.  The earlier you sign up, the more chances you have to win!

You don't have to be an FBC Member to join - you just have to love food!  All you have to do is click here to subscribe!