Given climate change, I can't be certain what the weather will be like when you read this, but it's snowing as I write it. And not the ephemeral "post them on Instagram" flakes we expect in November, but hard-driving icy stuff.

When the weather changes drastically like that, a switch goes off in my head and I switch from craving crisp, refreshing beer to seeking out richer, heartier options.

During the conversation we had for last month's column, Tim Webb (the UK-half of the co-author duo who wrote the World Atlas of Beer) made an interesting point. Those in Britain who bang the drum for traditional beer are really just asking for more of the variants on pale and brown ales that were popular during the 20th century. Stouts and porters (and many other styles) have a much longer tradition.

Porters are dark, roasty and usually weigh in over 5% ABV, so they are ideal for easing into winter beer. That's doubly true for those like me who find that some stouts carry a bitter edge from their black malts. 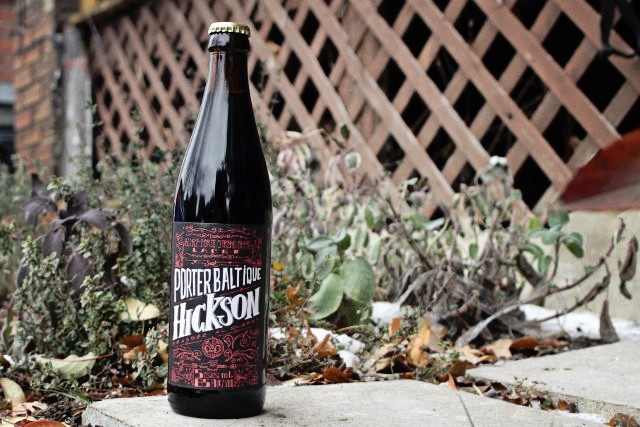 Brasserie les 2 Frères, from just north of Montreal, continues to do a good job of getting their Hickson brand beer into Ontario. As a style, Baltic porters have a very long history of travelling much greater distances. In the 18th century, porters were made at an extra boozy, export strength in preparation for the voyage across the North Sea, from England to Russia and points in between. Local Scandinavian and Russian brewers picked up on the broad strokes and made a lager version to satisfy demand during various conflict-imposed trade embargoes.

Hickson Baltic Porter is very dark brown and raises a finger or two of tight head. Its aroma brings to mind coffee, chocolate and toasted pumpernickel bread. The flavour repeats those darkly roasted notes over top of a sweet backbone and a boozy, warming finish.

Compared to many of Ontario's contract brewers, Brad Clifford of Clifford Brewing Co. is an old hand. He has a pair of best-in-show awards from the Canadian Amateur Brewers Association under his belt, plus the experience he picked up while head brewer on Get Well's nano system.

Frankly, I'm always a little stunned that this porter only registers at 5.7% alcohol given its hefty punch of flavour. In a dimpled pint mug, it's opaque and a shade or two away from black. Three fingers of buoyant, mid-brown foam complete the marshmallow-on-hot-chocolate picture.

The aroma continues on the dessert theme with spun caramelized sugar, vanilla and dark chocolate. Likewise, the flavour layers several courses of rich, roasted notes on top of each other. The finish is nicely bitter and avoids the acrid trap some porters fall into.

A this year's Cask Days festival, I got to try a version of Clifford Porter made with sour cherries. No surprise that it bore a lovely resemblance to black forest cake. If you spot this rare bird, don't pass up the opportunity to sample it.