In our continuing Canada's Tastemakers series we profile people who are making an impact on Canada's food scene,  from authors to producers to chefs and more. Today Tiffany Mayer chats with Chef Kyle Paton of Strangeway Sweets, who channels his passion for the cult classic TV show Twin Peaks into a line of chocolates that pays homage to the show.

Kyle Paton was three years old when Twin Peaks debuted on television in 1990.

At 7, the budding chef watched his first VHS recording of the mystery series directed by David Lynch.

And at 30, Paton started making mail order chocolates inspired by the cult classic that Rolling Stone deems one of the best TV shows of all time.

“It’s all from me being a nerd and being into that style of film,” Paton says about the film noir genre into which Twin Peaks falls. “Outside of food and El Bulli, I would say Twin Peaks is my biggest obsession.”

It turns out the series that most people would know for tracking the murder investigation of homecoming queen Laura Palmer is rife with chocolate inspiration. The main character, Special Agent Dale Cooper, played by Kyle MacLachlan, is “passionate and intense” when it comes to food, explains Paton, who has four Twin Peaks tattoos.

Cooper takes his coffee black as midnight on a moonless night, for starters, and he often drinks it alongside a slice of cherry pie. In episode 4, he orders a short stack of griddle cakes with melted butter, maple syrup lightly heated and a slice of ham at a local diner. “Nothing beats the taste sensation when maple syrup collides with ham,” Cooper says emphatically to the people at his table.

There was also the thought-provoking third episode in which he dreams Laura Palmer comes to him and a little person named The Man from Another Place says, “I’ve got news that the gum you like is going to come in style.”

So how do those seemingly innocuous details in a TV show play out as chocolate?

Paton, who markets his confections under his Strangeways Sweets label, interpreted Cooper’s coffee as a black coffee ganache. That "gum you like" translated to an anise salted caramel that tastes like the old corner store standard, Black Jack chewing gum. The side order of ham with those maple-syrup soaked griddle cakes became a bacon-flavoured caramel. And cherry pie — well, that was easy to convert to candy.

Paton also created a powdered doughnut ganache as an homage to the baked treats that were in the room when Waldo the bird was shot at the Twin Peaks sheriff station. His balsam fir salted caramels were a nod to how excited Cooper got over all the Douglas firs in the fictitious town of Twin Peaks.

They were packaged and sold last spring in two limited edition sets, just in time for the show’s return to prime time. Twin Peaks moderates, as much as fanatics who understood every one of Paton’s seemingly obscure references, gobbled up the unique chocolate collections.

That’s true of any of Paton’s confections, which the former vegan chef began turning out as a side hustle in late 2016 using Cacao Barry chocolate, organic dairy, and local ingredients such as foraged cedar and juniper.

“It’s just so much fun because not a lot of people are using those ingredients in a sweet context,” Paton says. “Cedar and chocolate go so well together.”

If his Twin Peaks candies are any indication, Paton doesn’t take his cues from conventional chocolatiers. During Strangeways’ earliest days, he offered different limited-run flavours every month. They were inspired by everything from seasonal ingredients to his toddler son’s favourite foods.

He’d post photos of each batch of his creations on Instagram, building up anticipation for their release. The fastest mouse clickers were rewarded for their efforts when the brightly coloured, hand-painted treats were posted for sale on the Strangeways website.

Eventually Paton gave in to the pressure of always stocking at least one flavour to appease those who missed out on the limited edition versions. So oozy salted caramels were given a permanent spot on his online order form.

Paton’s chocolates, which look like works of fine art, also make appearances on menus at the dinners he hosts under his pop-up project — and another ode to Twin Peaks — The Black Lodge. He flies in chefs from around the world to do one-night collaborative feasts that “tell their story against a Canadian backdrop.”

Most recently, Paton was invited for the second year in a row to headline two nights at Raw:almond in Winnipeg. His dessert of anise, blueberry and pistachio was made up of candy-coated bites resembling river rocks in honour of Raw:almond’s location at the frozen forks of the Red and Assiniboine rivers.

His chocolates and candies, he says, represent everything he loves about cooking, from the foraging for ingredients to the artistry of putting them together to their fleeting existence.

He admits it’s an “avant-garde, weird approach to chocolate” that some might have a tough time wrapping their taste buds around — until they try them. 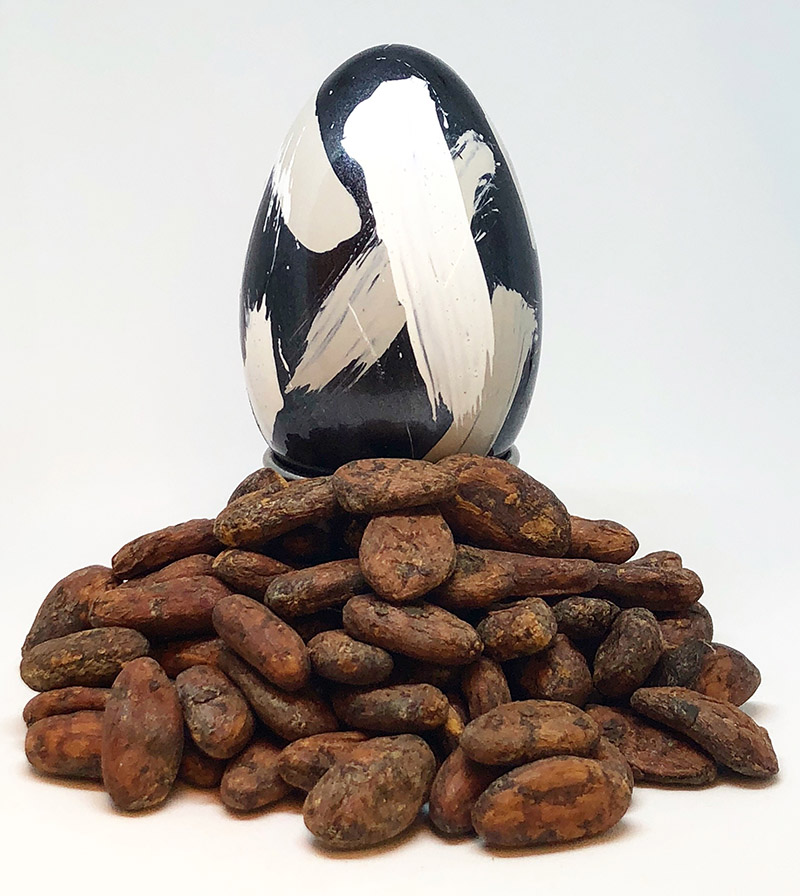 “I don’t even care if it’s the best thing someone has ever eaten as long as it makes people think. It’s going to be a new thing they’ve eaten. I care a lot about progression and not doing what everyone else is doing. You can’t have progression if you don’t have failures.”

It would be tough to consider any of Paton’s confections as failures, though. From his social media marketing savvy to his limited runs of making chocolate, he has the concept of supply and demand — especially creating the demand — down pat.

And Business 101 says that’s a recipe for success.

“I would like this to be a sustainable business,” Paton says. “I love what I do.”

Tiffany Mayer is a freelance journalist and author of Niagara Food: A Flavourful History of the Peninsula’s Bounty (History Press, 2014). She blogs about food and farming at Grub by Eating Niagara. You can also listen to her newly launched food podcast, Grub.

He’s such a creative guy!