Iconic Canadian Food: The History of the Butter Tart

Welcome to our series, Iconic Canadian Food! You may know which classic Canadian dishes you like, but do you know the stories behind them? Gabby Peyton shares the back stories of  a smorgasbord of iconic Canadian dishes. This month Gabby explores the history of  butter tarts, one of Canada’s most recognizable and possibly most debated desserts. 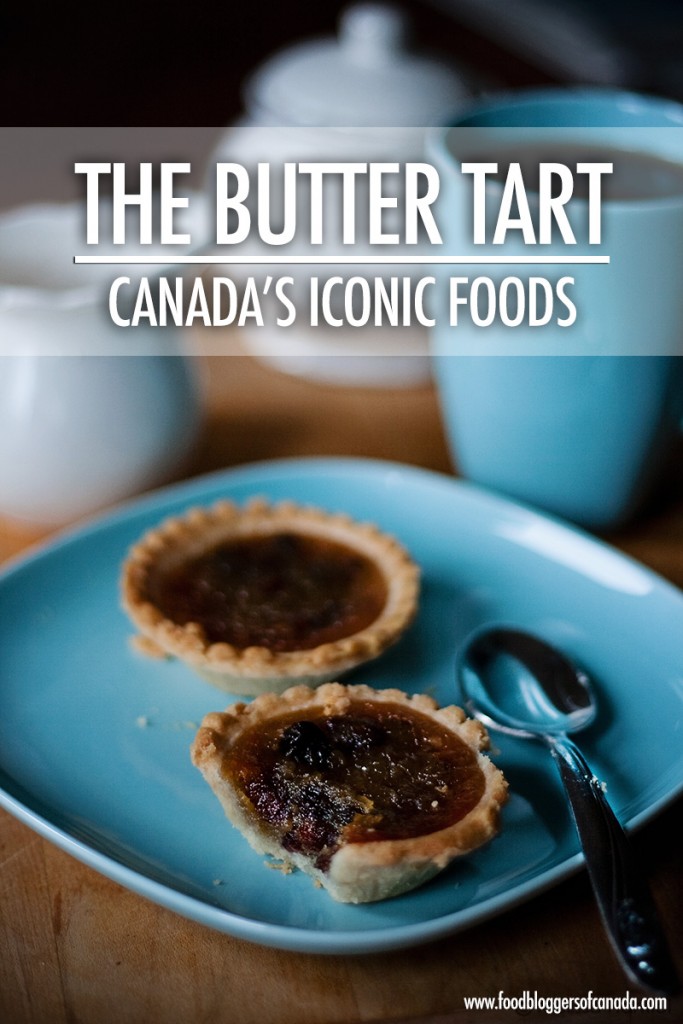 The butter tart is probably the most recognizably Canadian dessert there is. This iconic dish has stood the test of time and its syrupy simplicity has evoked a sense of Canadiana like few others. But butter tarts are inarguably the most disputed dessert in Canada, and it all comes down to one question: raisins or no raisins?

Historians are meant to be impartial, but you can’t butter up a baker with objectivity. They either toss raisins in or they don’t. Butter tarts are a sugar pie constructed of basic ingredients — pie crust with a sweet filling made of butter, sugar, syrup and egg — but there’s nothing basic about the taste. The sickeningly delightful centre melts in your mouth and the sugar high would please even the most temperate of sugar eaters.

Like any Canuck, the butter tart isn’t showy but has rich flavour embedded in a tradition of adaptation and family — its history has as much depth as the flaky pastry encasing it.

The Pre-History of Butter Tarts

While butter tarts are known around the world as the quintessential Canadian dish, the invention of this confection actually goes back to before Canada was even a country. During a ten-year period, from 1663 to 1673, at least 770 young women were sent to Quebec by Louis XIV to help with colonization. These single ladies were sent with dowries to help boost settlement in New France, meaning they were going to marry, then cook, clean and procreate (the baby boom after this immigration was bigger than post-WWII).

These King’s Daughters (or Filles du Roi) as they came to be known did what any resourceful baker would do: they made do with what they had. With the abundance of new food they created the butter tart forerunner with baking ingredients readily available like maple sugar and dried fruit. This ancestral tart later led to variations like tarte au sucre and the butter tart.

Should Butter Tarts Have Raisins?

Those who remain planted in the raisins-in-butter-tarts camp are probably feeling a bit smug at this point. In an attempt to settle a long and heated debate, it’s key to turn to the original written recipe. The first documented recipe for butter tarts was published in The Women’s Auxiliary of the Royal Victoria Hospital Cookbook in 1900, out of Barrie, Ontario. Mrs. Malcolm MacLeod’s recipe did not include raisins, but currants paired with that ooey-gooey filling we know and love today.

Throughout the early 1900s butter tarts gained popularity and variations were published in Toronto’s Daily News and included in the 1911 Canadian Farm Cook Book. Butter tarts became all the rage in the 1920s and 1930s, and by the 1980s readers were desperately writing The Vancouver Sun’s fictional baking expert, Edith Adams, for a copy of her recipe. Over the past 350 years, they have become ingrained in the Canadian culinary psyche.

Quebec might have been the birthplace of the early butter tart, but it’s Ontario where the butter tart has flourished. Ontario’s Best Butter Tart Festival in Midland has become a must-attend event for butter tart aficionados. At the 2016 festival more than 125,000 tarts were gobbled up. Nearby, the Wellington-North Butter Tart Trail has been fattening up visitors with their butter tarts since 2006 with 16 tart-stops.

The Kawarthas Northumberland Butter Tart Tour promotes over 50 bakeries to choose from. Since 2011 this self-driven tour offers four different routes where tart enthusiasts can sample traditional butter tarts (with or without raisins), along with the Nanaimo Bar Butter Tart and Blueberry Butter Tart.

The Social (Media) Debate of The Butter Tart

In addition to the raisin debate, the consistency of the filling has lead to baker brawls. Two camps sit firmly on the runny filling side or the firm side, and I won’t even delve into what nut should go into a butter tart (if any at all). There are many variations in the recipes for this simple, yet incredibly delicious Canadian dish. Perhaps nothing’s more Canadian than a debate over a butter tart.

Whichever way you devour your butter tarts — raisins or nuts, runny or firm — Canadians can certainly agree that butter tarts are the most iconic dessert across the country.