Dana Harrison and Joel MacCharles.  Dana does all the behind-the-scene stuff and is our art director.  Joel cooks and writes most of our content.  We both eat. A lot.

Where were you born?

There’s two of us behind WellPreserved, and we were both born in Scarborough.  Dana (Harrison) spent some time in the Kingston Road area of Scarborough before moving out west and then to Markham for High School.  Joel was raised in the country and moved to Markham later (we started dating more than 15 years after meeting there).

Where are you living now?

We live together in the East end of Toronto, The Riverside neighbourhood to be precise.  It’s a small enclave (barely a few blocks long) often overlooked on the way to Leslieville. We love it and people are starting to catch on to the fact that it’s crammed with great stuff so it’s getting more and more crowded.

A realtor would call it Leslieville but we’re fiercely proud of being from Riverside.  It’s grittier.

Dana launched it on a whim while I slept after 3 days of Christmas cooking and revelry.  It was meant to help promote her graphic design business and give me a creative outlet, a place to record recipes and ideas (I’m notorious at not documenting or labeling anything).  We ended up posting for the next 1,500 consecutive days and, in that time, everything about our life changed dramatically.  The blog changed our relationship and perspective on food so drastically that it has also changed the types of clients Dana was willing to work with and expanded her business in a totally different direction than initially thought. We also never would have been able to imagine the types of people and opportunities it would open up at the outset.

It was an impulsive thing, Dana just needed to sign up for wordpress and thought of something on a whim. It’s something we didn’t think a lot about.  Normally we’d brainstorm together and maybe overthink it for a while, but we’ve learned it’s important to just get going and get something out there. I used to joke that it was about my ‘well preserved’ liver…but it relates to our core content - preserving food.

And that’s not like us at all!  Joel used to joke it was about it’s liver but it relates to our core content - preserving food.

Anything to do with food and drink mainly. Local food.  Farmers.  Craft beer and cocktails.  Recipes, tips and tricks.  Of the 1,800+ articles we have, about 40% are recipes (half of those being for preserved foods).  We live with more than 700 jars of preserves and our content reflects that.  One of the things that differentiates us is that we write about 7 (or more)different styles of preserving.

What post are you most proud of and why?

My speech from TEDxToronto.  I had tried to speak at TEDxToronto for 4 years before finally being accepted to speak last year.  I had no idea that you could write an 18 minute speech for 5 months!

I’m also proud that we managed to get “WellPreserved” and “BeaverAss” to trend on Twitter across Canada during the speech.

We’re also proud of the community of people that we’ve brought together around us. We find that the most enjoyable part and are really starting to feel like we have a community to draw on and the ability to rally people around thinking differently about food. 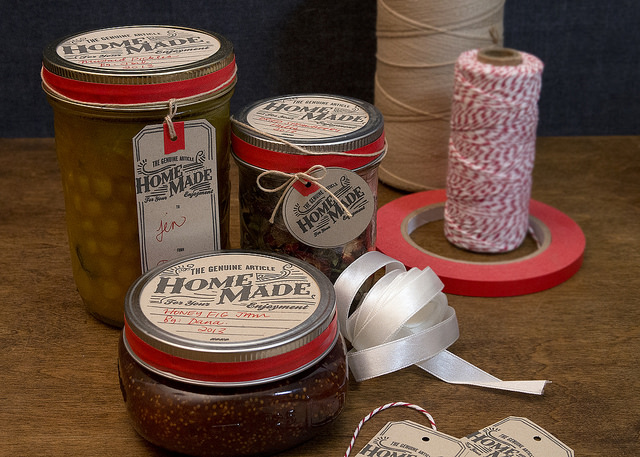 We’ve been writing a weekly newsletter for just over a year.  In many ways I wish we would have started it sooner but I’m genuinely surprised at how much fun the newsletter is to write - and the feedback we receive from subscribers inspires us to try to make it better every week (it’s by far the single item that requires the most attention of anything we do).

When people subscribe to the newsletter we send them a file that Dana designed of printable labels (the ones in the photo attached).

The reason I’ve chosen it for this section is because we share links to 20-25 blogs every week in the newsletter.  It feels great sharing the work of others (including many Canadian Food Bloggers) and I’m hopeful that we can continue to grow the audience in order to keep sharing the great work of so many other people and help support their projects.

How To Cook the Perfect Porterhouse Steak in the Oven. We don’t eat massive amounts of meat and, due to a large vegetarian contingent in our readership, are very select when sharing posts featuring giant hunks of meat.  I’m not sure what draws people to this post though many tell me that the technique (searing in a frying pan then cooking under a broiler) is something new to them.

It does make a killer steak.

What is one (non-kitchen) gadget you can’t live without?

My rifle or my GPS.  My GPS (for hiking in the backcountry, not for driving) has literally saved my life but my rifle changes our kitchen.  Despite being nearly vegetarian for more than 7 years, I run a hunt camp in Southern Ontario.  It’s been in my family for more than 40 years and all of the meat is sustainable, organic, free-range and matches our personal food ethic.

We seem to eat less meat each year but the quality that we consume increases.  Hunting is a big part of that.

Dana’s non-kitchen gadget of choice (she has many as her work is usually outside of the kitchen!) is a technical pencil and a rollerball pen (black ink). Since technology has become such a big part of our toolbox for the blog and also for her design business, she has started going back to drawing things by hand, it’s more tactile and connects you to your work better - like making food from scratch!

What is one kitchen gadget you can’t live without?

My rasp.  Zero question.  I also have a $10 mandoline that I’m a massive fan of.

We’ve been having a lot of fun hosting monthly food pop-ups called HomeEcNight.  We bring together 3 or 4 friends who own small food businesses, bring them together at our local watering hole so everyone can come out and meet and chat about food. We’ve had over 100 people show up to the last 3 events (over the course of the night, the bar is on the small side). The participants give samples of food or have a small interactive demonstration (for example, we had a friend give ‘bad beer samples’ so you would know what to look for in a pint in the future).  If bloggers contact us before the event we will bring the participants in early for you to interview as we know how tough it can be to get great stories and content.  Of course if you own a small food business, let us know and we’ll see if there’s a fit… 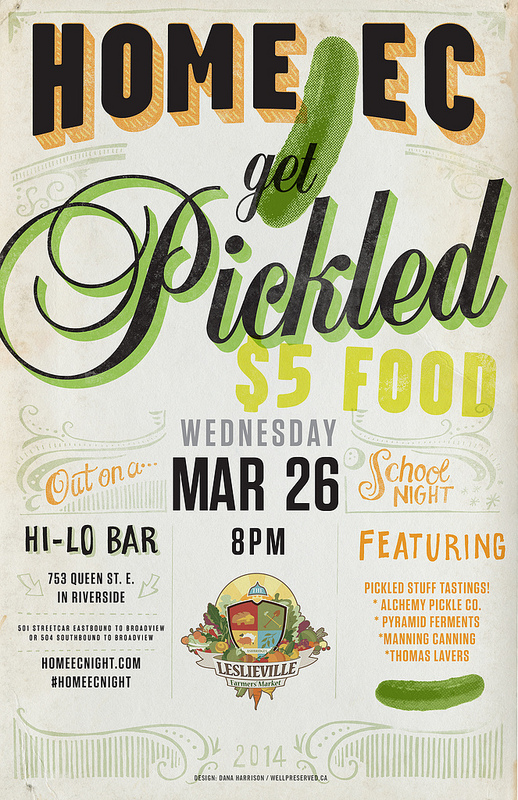 And, here’s a scoop: we’ll be announcing the biggest HomeEcNight we’ve ever hosted on Sunday, September 14th.  “the HomeEc:  Big Outdoor Kitchen Party” will be a year-end celebration of the HomeEcNight parties at Harbourfront in their new Common’s space (between the Queens Quay and York Quay Terminals)  If you want to be involved, let us know…

We don’t deliberately try to be unique or different so I’m not sure we know of any one thing that makes us different.  We often hear that our offline ‘real-life community’ at Events like HomeEc (more than 100 people showed up at our last event which was a pickle tasting) and Dana’s graphic design is something that makes us ‘who we are.’

I struggle with the idea of ‘unique’ because that leads to the ugly Elephant in the room: competition amongst food blogs.  And while there’s always a certain pride in curating community and engagement, we’re big believers in the term ‘all ships rise with the tide’ and want to work with others who share the same passions.  Blogging is a lot of work and is something we largely do to get away from the demands of our regular work so pursuing ‘uniqueness’ isn’t a high priority; it’s something that happens (or not) by accident. 🙂