In our Food Styling 101 series, Lisa Bolton offers up food styling tips for conveying the stories you want your food to tell. Her advice will help you create food photography that entices readers to make your recipes and read your articles. This month Lisa shares the second of two posts on food styling tips for eggs in breakfast and brunch scenes. 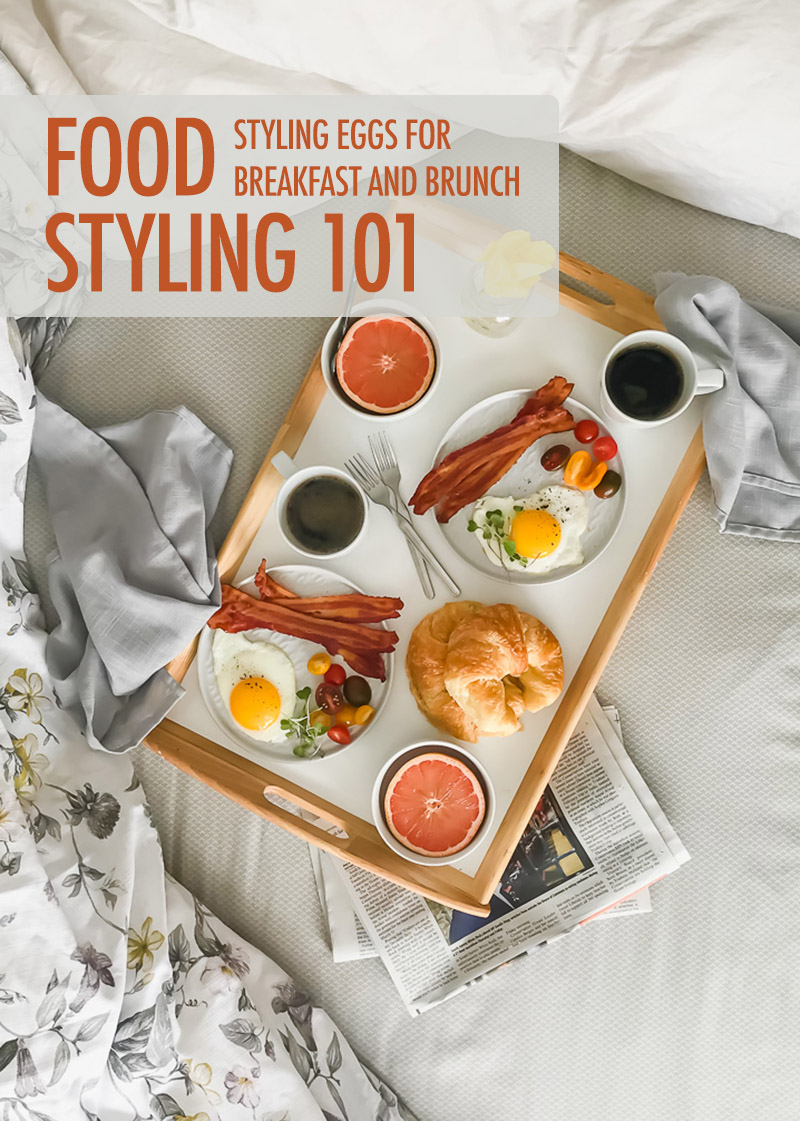 This month’s food styling article is the second in our two-part series on styling eggs. In Part One, we discussed how to style eggs in the situation where the egg itself is the obvious hero.  In Part Two, we tackle breakfast and brunch scenes that feature eggs, alongside other contributing ingredients.

There's a reason the expression “put an egg on it” exists: because so many foods improve exponentially when you do. The same can be said for styling a scene. Where it makes sense, think about how adding an egg can add texture, shape and colour to a food scene.

An egg can add interest and unexpected curiosity to a dish — a salad, a rice bowl, a waffle or a steak. There are endless opportunities to add what's been described as one of the most sensual foods. An egg hits all the marks in shape, texture and color.

Using Eggs to Add Colour To A Scene

In the shot with the blackened steak and waffled potatoes, it would have been easy (and made sense) to add ketchup or BBQ sauce in small dishes where the eggs were. But adding a runny egg not only made sense with the meal, it also added a bright element to the board.

Strategically placed throughout the scene, the eggs create a path for the eye to follow; a path that's more interesting and appealing than a simple condiment might be. The egg also transforms what could have been clearly an evening meal to perhaps brunch or breakfast.

There are several other ingredients on the board but the eye is drawn to the egg and the action it implies: dipping toast, potato or steak.   It creates unintended movement simply by its presence.

Styling With Whole Eggs: Keep the Mystery Inside

An egg also doesn’t always have to be cut open to create interest in a food scene. It's rare to see an egg left whole, but the outside of an egg actually takes well to herbs, spices and seeds.

In the image the eggs are left whole and while they have an identifiable shape, there's still curiosity as to what might be inside. This creates anticipation about what will be there when we cut it open. The viewer thinks they know, but one of the first things they would do sitting down to this board is cut it open. That can't be said for a lot of foods.

Leaving the egg whole but with its traditional appearance altered creates a sense of anticipation.

Add a Little, of a Lot - Styling Eggs With Multiple Items 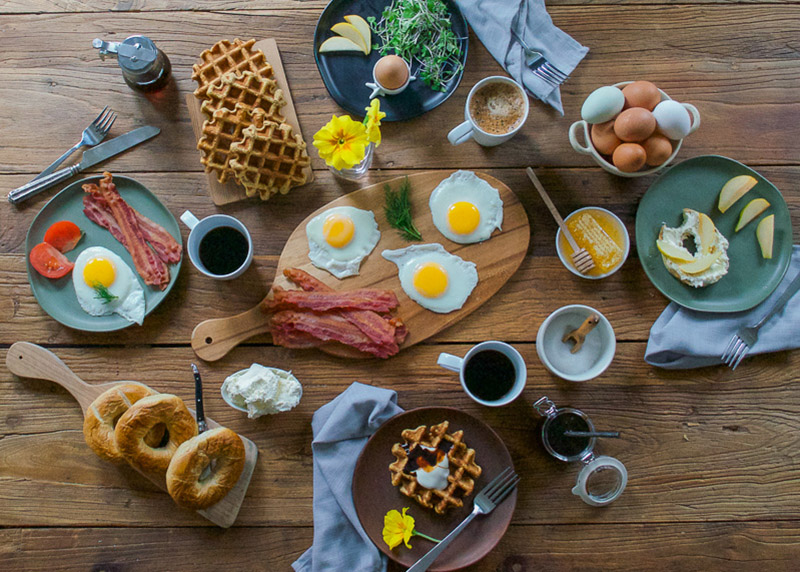 One of my secrets to building out an interesting scene is to use a little, of a lot.  That is, to use a small quantity of a large number of items.

This approach works well for building out a tablescape scene. Adding a lot of items varying in texture, shape and color, but in small quantities, keeps the viewer’s eye engaged for a longer period of time as they survey the image. Their eye has to move around the image and take in all the pieces.

When you're setting a scene, don’t feel you need to have enough items for each place setting. Keep components in odd numbers but don’t feel because the place setting is for four, you need four eggs …. Plate three or five, or if you're plating four, for example, break them into three and one in the scene

Get out of the Kitchen - Breakfast in Bed or Outside

If you're like me, the majority of your shooting takes place in and around the kitchen. Styling a breakfast scene is a great chance to get out of the kitchen — and you don’t even have to make your bed!

A simple tray on an unmade bed creates a beautiful backdrop and stands out in a sea of hard surfaces of wood and marble. The best part is, the messier the better! Ruffle up the sheets, throw some pillows around and lay down a tray. Props like a newspaper, carafe or a single flower in a vase all convey the message of generosity and thoughtfulness.

As a food stylist who also takes food waste very seriously, I love that I can experiment with eggs and always find a way to use up any extras. Trying to make a perfect fried egg and the yolk breaks? Chop it up into a fried rice or Buddha bowl.  Extra hard boiled eggs from a deviled egg shoot? Use them in egg salad or potato salad, or drop them into a broth based soup.

Raw, medium or fully cooked, the simple egg offers so many stylistic and compositional opportunities.

Lisa Bolton is food stylist, recipe developer and creator of beautiful food boards.  You can find her work at lisadawnbolton.com.  She lives in the Lower Mainland of BC.  Her first cookbook, On Boards, (affiliate link) is due to be released by Appetite by Penguin Randoms House in October 2018 and is available for pre-order. You can reach her on Instagram, Twitter, Pinterest and Facebook.