As part of the Canada 150 celebrations happening this year, we’ll be exploring Canadian food from coast to coast all year long. In our Canada’s Chefs series, Tiffany Mayer will be profiling Canadian Chefs from every province, embracing Canadian cuisine. This month she interviews Chef Kelly Cattani who brings the haute cuisine approach to cooking in volume at Hilton Winnipeg Airport. 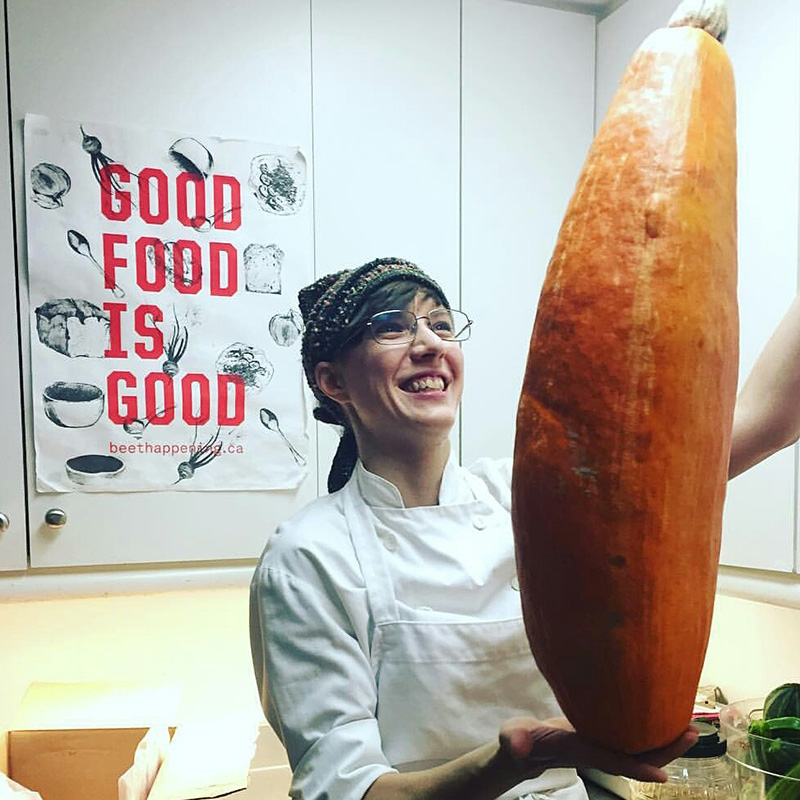 Kelly Cattani doesn’t have any romantic stories of tugging at her mom’s apron strings when she was child.

There were no epiphanies at the dinner table as a youngster. But there was a lot of picking her peas out of fried rice. Cattani also couldn’t bear red sauce on her pasta, “a cardinal sin” in the eyes of her Italian food-loving father.

“I was a super-duper picky eater,” Cattani recalled. “My mom, when I told her I was going into cooking, she laughed at me and thought I was joking.”

There have undoubtedly been smiles since that revelation when Cattani, now 35, was in her late teens and fell in love with feeding people while working at a smoothie bar. But those grins are brought about by her abilities behind the burner. 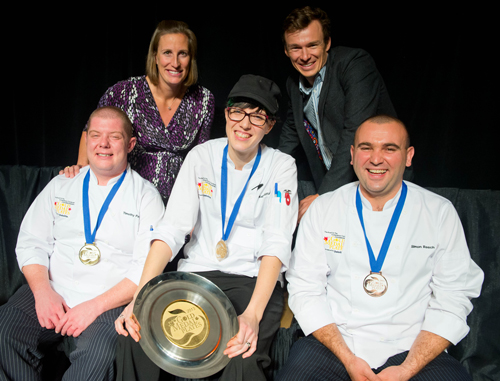 Like the time she won Gold Medal Plates in Winnipeg in 2013 and then went on to represent Manitoba in national competition. She did it serving elk tataki with soba noodles — a far cry from the durum wheat pasta she would eat with only butter while growing up.

More of a marvel than overcoming an aversion to peas in favour of game meat and toothsome buckwheat noodles is that Cattani feels entirely at ease doing up such a thoughtful dish for hundreds of people in one sitting.

Making dinner for as many as 400 people is just another day’s work for this ‘Toban, who’s the executive chef at the Hilton Winnipeg Airport. But it’s work done with the purpose of challenging the notion that quantity comes at the expense of quality in the kitchen.

“I wanted to prove wrong all the chefs in school who said ‘You can’t do this,’ ” Cattani said. “You’ll never break down a whole pig (doing volume cooking), and make charcuterie. You’ll never be able to afford it. I wanted to see that change.”

Indeed, she’s leading that shift — yet another surprise from someone who was determined to make a name for herself in fine dining, doing composed plates in a restaurant with room for 40 people, tops. 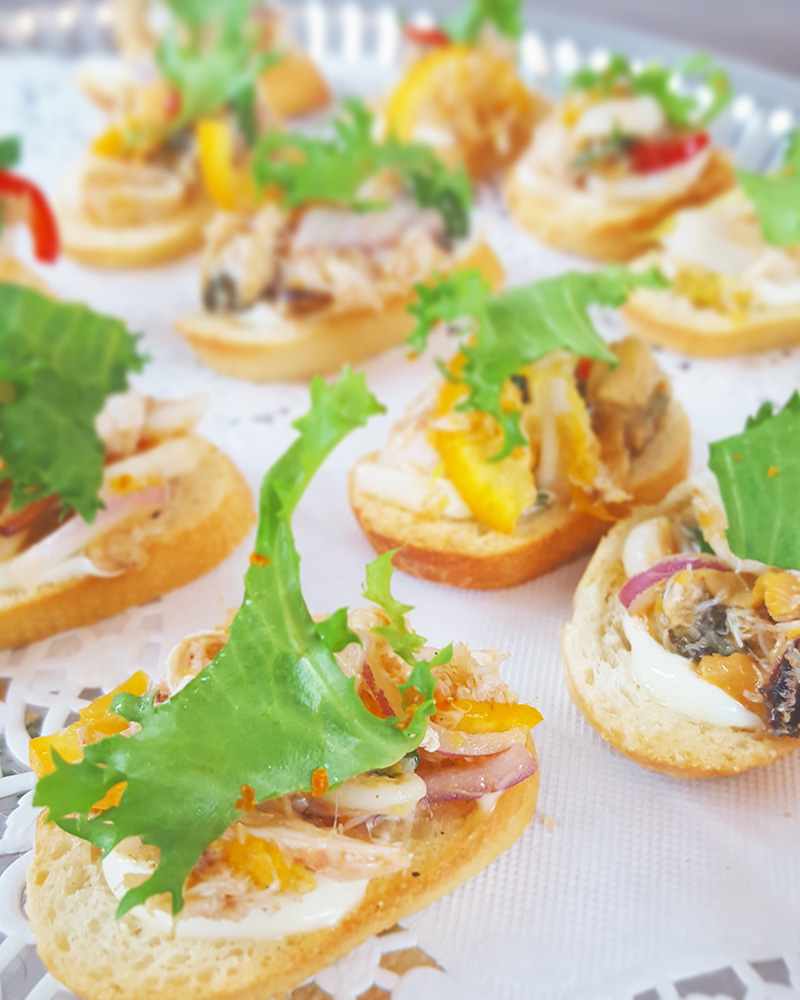 Still, she brings the haute cuisine approach to “volume cooking” thanks to the lessons learned in kitchens where she cut her teeth as a chef, far removed from banquet halls.

Cattani spent two years working with Chef Bernard Mirlycourtois, a Frenchman whose M.O. was scratch cooking at a time the very idea was foreign to others wearing a tuque blanche in Winnipeg.

He’d cook off-cuts like trotters for staff meals, knowing they wouldn’t fly on the menu but held the promise of serious professional development for his staff. He used everything in the kitchen with little tolerance for waste.

“He was really passionate about gardening and used a lot of foraged ingredients before it was big to-do,” Cattani recalled. “He made everything from scratch."

By the time she moved on from her mentor, Cattani's desire to get back to basics in the kitchen overrode her earlier ambitions of refined repasts, and led her to The Fresh Café with Cassandra Watson and Chef Mandel Hitzer.

The focus was fresh and hands-on with Hitzer, best known as the founder of Raw: Almond, the dining hotspot that has popped up on the frozen junction of the Red and Assiniboine rivers for the past five winters.

They made their own preserves and sausages, cured their own meats, and did everything themselves.

The experience reinforced her impetus to use local ingredients in the kitchen. Winnipeg isn’t short on abundance, she noted, and the environmental benefits of eating what’s grown close to home confirmed her decision. It even inspired her to get her firearms licence to hunt, though she has yet to do it.

“I very much doubt I’m going to follow through. If I go, I’ll probably go duck or goose hunting with my uncle. We have lots of geese here.”

Though Cattani loved the experience with Hitzer, she missed the nuances of fine dining. It was a longing that led her to the kitchen of the Manitoba Club, the storied gathering spot that’s played host to Mark Twain, royalty, and every Canadian Prime Minister.

After she had her daughter, Madeleine, in 2009, Cattani found herself at an awkward point in her career. She wasn't quite a sous-chef or a head chef, either.

She was in culinary limbo until the opportunity arose to don her chef’s whites at the University of Winnipeg, where she “fell into volume cooking” at the university’s Diversity Food Services.

This wasn’t Cattani’s first taste of cooking for the masses. When studying culinary arts at Red River College, she spent a summer working for a catering company out of the Winnipeg Art Gallery. She was part of a team that put out 200 plates at weddings, and while she didn’t think such mass production was for her at the time, the experience held her in good stead in a campus kitchen.

So did those years with Mirlycourtois and Hitzer. Cattani brought that scratch cooking approach to an institution that fed 10,000 students, and it stuck.

“I really think our success really changed the way people saw this kind of cooking in Winnipeg,” Cattani said.

It also changed how people saw Cattani. She got the nod to help supervise a staff of 300 people tasked with feeding 5,000 volunteers three meals a day at the Winnipeg Folk Fest — her largest services to date.

Cattani has also deftly navigated seatings at the Table for 1,200, an annual outdoor feast, spearheaded by Hitzer and Chef Ben Kramer, that’s served on one of the world’s longest tables at the corner of Portage and Main.

She joined both chefs in 2014 as one of only two female culinarian invited into the kitchen at Raw: Almond. There were fewer diners than she’d grown used to, but the prestige of getting on such a coveted list of chefs was undeniable, she said.

Ironically, the small, intimate service was one of Cattani’s most difficult. She did a three-course tasting menu on the coldest night of the year. Headlines touted Winnipeg as more frigid than the surface of Mars that day. The gas line to the makeshift kitchen on ice froze. The generator gave out. Everything had to be cooked over butane burners.

She still knocked it out of the park and gained new appreciation for winter in the process. “It made me be more comfortable with a season I’m not all that comfortable with,” she admitted. “That you should get out and really enjoy the beauty of it.”

This past winter was also made better by starting her new gig with Hilton. Cattani knew the hotel was doing a major overhaul of its dining room, now called The Oak and Grain, and she would have creative control over the menu.

She would also oversee the hotel’s banquet kitchen. Cattani clocked 70 hours a week during high season this past June, ensuring everyone was fed and keeping The Oak and Grain on course.

That may sound overwhelming but there’s a rhythm to those days, and it’s one Cattani thrives on. Excellent math and organizational skills also help.

No matter how busy it gets, though, Cattani has never lost her desire to treat dinner for 400 like a meal for 40.

“I’m pretty passionate about small-scale stuff and touching all the food that goes out of the kitchen, but that’s not always the reality that’s possible,” she said. “One of the things that I love about this industry is I don’t have typical days. It’s never been boring, that’s for sure.”

Thanks for highlighting one of Winnipeg’s faves!