Almost hidden on a rural road in Hants County, Nova Scotia is Meander River Farm and Brewery. It's one of the two working farm breweries in Nova Scotia, the other being Big Spruce Brewing. With some help from their adult children Campbell and Fraser, Brenda and Alan Bailey run the farm and brewery that stretches along the river that gives its name to the brewery, growing hops, lilacs, apples and raising a few pigs. 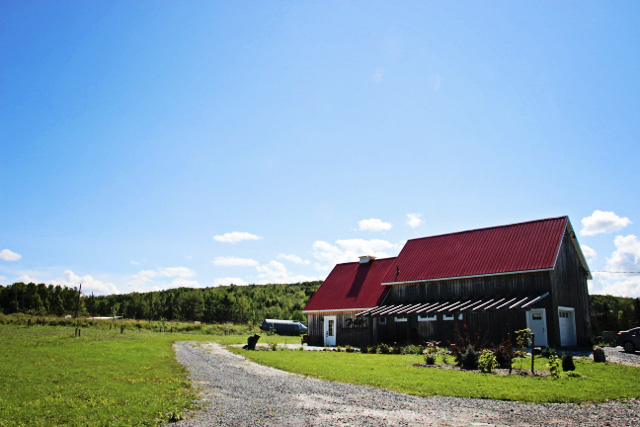 On reaching the brewery on Woodville Road near Newport, you'll find a red-roofed wooden building in a field that has the striking frames for their hop plants. In the summer there's a tent set up for beer lovers to sit and drink in the surroundings while sipping one of their beers or ciders. There are also tours offered for the brewery and hopyard to offer insight into their passions.

Inside the brewery building there's a store component selling not only beer and cider but crafts, soap, honey and lavender. Meander River became the first brewery to offer a Community Shared Brewery program for beer lovers who wanted to support the local brewery while also being recognized for their support.

The 3 BBL system that's in the building is only slightly bigger than some homebrew systems, making them on the low end of the scale for Nova Scotia's craft brewers. The size is to do with their commitment to sustainability and environmental responsibility. Meander uses their pigs to prepare the land for planting crops, their spent grain is used as compost and as feed for livestock, and the excess water from the brewery is recycled for irrigation of the hops which they use in their beer. Garrison Brewing also uses Meander River hops as well as spruce boughs in some of their beers.

One of their flagship beers is Lunch Box Pale Ale, named in memory of Brenda’s father. He enabled them with the skills needed to fulfill their ability to renovate old buildings and brought his lunch box, which is on display at the brewery, to work every day. They also have Ashdale Honey Brown Ale available year round, named after the honey used in the recipe and harvested from hives on the farm.

Some of their beers make it to bottles, but some are available in growlers only. When you make the journey to visit, they are only open Friday evenings, and Saturday and Sunday afternoons.