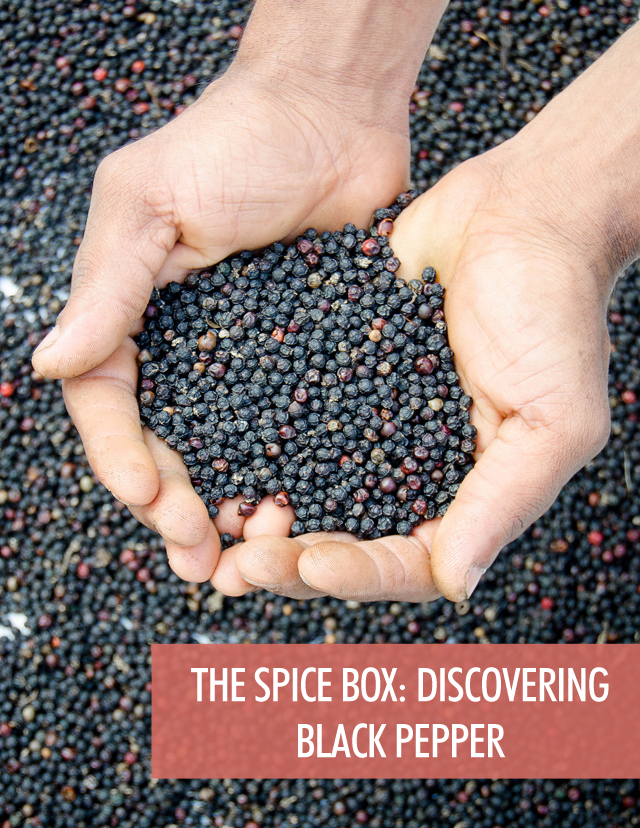 This post is part of a monthly series here on FBC called The Spice Box.  Primarily written by Michelle Peters Jones, these posts will create a spice primer for new and experienced home cooks alike! Have a spice you’d like to see profiled?  Let us know in the comments.

Black pepper is the most ubiquitous of all spices. There is hardly any dish that cannot be enhanced by its smoky, spicy overtones and it is one of those spices that is used universally across cuisines. Growing up in India, pepper vines curling around trees were a familiar sight, as was the picking, drying and grinding process.

Black pepper is native to the Western Ghats in the South of India, but is also grown across most tropical countries, with Indonesia, Brazil and Vietnam being some of the other major exporters of this spice. Malabar black pepper (Tellicherry), however, is still considered one of the best varieties of pepper available.

Black pepper grows on climber vines that cling to tall trees. Pepper vines can grow up to ten meters high, and produce fruit all year round. The berries can be picked in three cycles to produce three kinds of pepper: green, black and white.

I had the opportunity to speak to a few pepper growers when I was in India, and they all explain that black pepper, while ubiquitous, is a hard spice to grow, and very prone to disease and is extremely labour intensive. It depends on a set amount of rainfall every year, and excess rainfall, or lack of it, can wreck crops. However, the potential rewards of growing it are great, and it is usually grown as a value added crop along with cardamom, coffee and tea.

The flavor profile of black pepper is unmistakably smoky, spicy and hot. This versatile spice is used in all kinds of savoury dishes, and also makes an appearance in desserts, as it brings out the sweetness of ingredients like strawberries and chocolate. Like many spices, black pepper is usually toasted quickly to activate its essential oils, after which it can be incorporated into spice mixes or stored in a pepper grinder. Black pepper is stored in the usual way to other spices, in an airtight container, and ideally in a cool dark place.

Apart from its uses in the culinary world, black pepper is also extensively used in health and health related products. It is an ancient spice that is used in alternative health practices like Ayurveda and Unani, usually as an anti-inflammatory, and for its fever and cold reducing properties.

And finally, did you know that the term ‘peppercorn rent’ meant the exact opposite of what it means today? The price of peppercorns was so high in the Middle Ages around Europe, that it was frequently used as currency. Today, the ubiquity of pepper has led to the term being used as a metaphor for cheap. However, recent heavy rainfall in pepper growing areas of the world has meant that there is a shortage of pepper, leading to a steep increase in prices.

Such an informative post … I’d never seen a picture of the peppercorns on a vine. Must make it a point to go see this when I’m in India next. Thanks!

Thanks Karen, yes, you should definitely check out pepper vines. They’re really pretty too.

Check out a new idea with peppercorns. A new infused peppercorn unlike anything on the market was recently launched in Princeton, bc, Canada.
Peppercorn infused with whiskey, wine or rum and then smoked to create an exciting new flavour and taste to all your dishes.
Check out the website for more information; http://www.thesmokinggunpepper.com