The Spice Box — Getting To Know Ginger

Getting to Know Ginger is part of a monthly series here on FBC called The Spice Box. Primarily written by Michelle Peters-Jones, these articles create a spice primer for new and experienced home cooks alike! 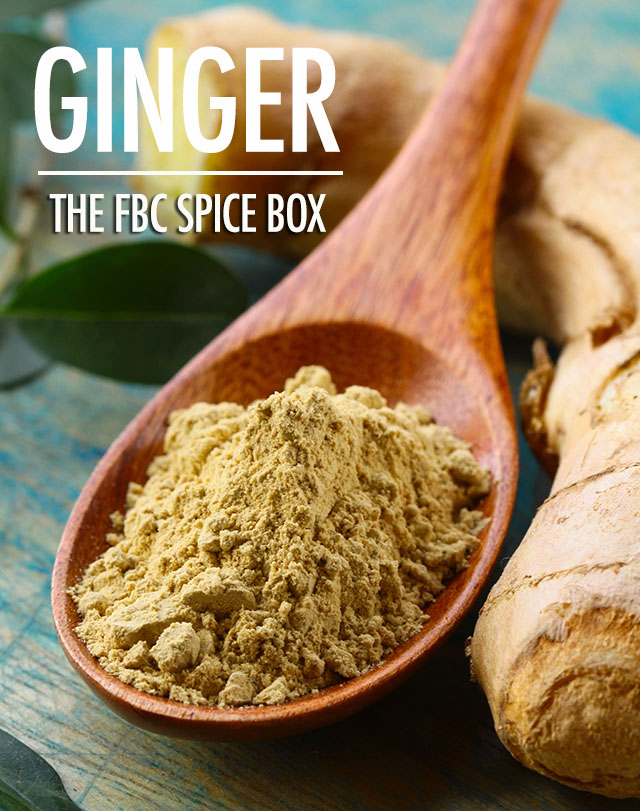 When I got ginger as my Spice Box topic for this month, my first question was, is ginger a spice? It was a tricky one to answer, to be honest, and a little on the challenging side. So in this post, I'll be talking about ginger, the rhizome, and ground ginger, the spice. I thought this is probably the best way to classify them, especially since ginger can also be called a herb. Both fresh and ground ginger are my favourite ingredients of all time, so this was truly one of the nicest posts for me to write.

Ginger is one of the most used rhizomes in the world, both as an aromatic and as a health food. It is mostly used in Asian culinary traditions, and was one of the first 'exotic' spices to be brought to Europe, mainly by Arabic spice traders. Ginger is originally native to India and parts of Southeast Asia, as well as other parts of the tropics like Africa and the Caribbean. Fresh ginger, as we know it, is the root or rhizome of the ginger herb. A knobbly root with thin brown skin, young ginger is tender and juicy. The older it gets, the more fibrous the root. Dried ginger is tough and traditionally ground to make ground ginger. Ginger leaves are not used as much, as the plant is mainly cultivated for its roots.

While it's possible to grow ginger here in Canada, it does need a hot, humid climate and moist, loamy soil, so is probably best grown in greenhouses. You could also try to grow your own ginger from the roots you get at the grocery store. If you're growing your ginger outside, bring it in during the winter and treat it like a houseplant. The little yellow and white flowers are pretty and while ginger is a slow growing plant, the longer you wait, the larger the roots at harvest time.

Ginger has an incredibly distinctive sharp, spicy and citrus-like flavour, with a warm fragrance. Dried ginger has more of a musky, sweet smell and tends not to be as as sharp or spicy as fresh ginger, as a lot of the essential oils (particularly gingerol) have been evaporated in the drying process. Ginger also tends to have hints of cardamom (a spice to which it's related) and cloves.

Ginger pairs well with most spices, with a particular affinity to 'warmer' spices like cardamom, cloves, cinnamon and allspice. Fresh ginger is used in almost all Asian cuisines in many different ways, particularly as a seasoning, garnish, aromatic or pickled (mainly in Japanese cooking). Ground ginger is used more for baking, like in gingersnaps and gingerbread. Ginger is also a popular seasoning for beverages, especially in Indian chai and Jamaican gingerbeer. Ginger ale is a popular drink that mimics gingerbeer, but isn't as sharp and spicy. One of my favourite treats is candied ginger, as well as my mom's preserved ginger in sugar syrup.

When buying ginger at the grocery store, look for tender stems with minimal branching. One way to find out how fresh ginger is, is to gently scrape your nail on its side. If it peels easily, it's fresh. Some grocery stores also sell young ginger, which is used to make crystallised or candied ginger. Fresh ginger is usually peeled and then grated or finely chopped to be used as a seasoning. You can peel ginger easily using the back of a teaspoon, the serrated edges of a grapefruit spoon or a sharp paring knife. It can be finely julienned to use as garnish. It's normally bruised for use as an aromatic and thinly sliced to pickle it.

If you would like to dry your own ginger, the best way to do it is to chop it into thumb-sized pieces and place them in bright sunlight until wrinkled and fibrous. My mother sometimes boils it before drying it, the infused water then being used for chilled drinks. Once ginger is dried, it can be stored in an airtight tin away from direct light. You can also use a powerful blender to grind dried ginger to use in baking and other savoury and sweet preparations.

Non-Culinary and Health Benefits of Ginger

Ginger has long been used as a medicinal root in many different cultures. It's popularly used as an anti-nausea remedy, especially for pregnancy and air and motion sickness. It's also used to aid digestion, as an anti-inflammatory and as an immune system booster. Ginger oil is also used as an an anti-bacterial agent, and in cosmetics, perfumes and in household cleaners.

In Middle England, ground ginger was sprinkled on top of ales and beers (mainly to avoid stomach upsets), giving rise to the popular drink we know today as ginger ale.

Looking for more spices and herbs to help with your holiday baking? Here are some of our favourites!

What’s your favourite use for ginger? Leave a link to a recipe on your blog in the comments so everyone can check it out!