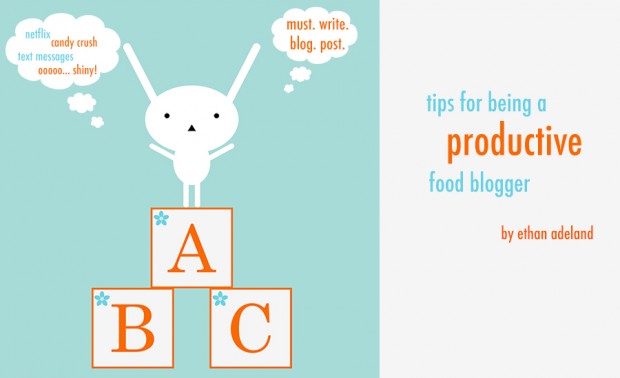 Was there something to having that dedicated table for homework when we were kids? Homework was always done at the desk in my bedroom or at the kitchen table, especially if multiplication was on the agenda. It was annoying and certainly not fun! However, there was something about routine, and looking back, it was about accountability and not having my attention diverted elsewhere.

The distractions used to be the VCR, playing Nintendo, wrestling with WWF figurines and bugging my younger sister. Nowadays, it's Netflix, constantly checking your phone, playing Candy Crush and making sure your son doesn't bug his little sister (or something along those lines).

I've lived in 12 places in the last 18 months, so I know I've lacked consistency with my "work space" environment, but through it all, I've tried to abide by some rules along the way to focus and maximize the time I spend working on blog stuff.*

What are some of the things you do to be a more productive food blogger?

*The obvious comment to me referring to "blog stuff" is that I haven't posted very often at Feeding Ethan, I'm referring mainly to Food Bloggers of Canada work.

This article was written by Ethan Adeland, co-founder of FBC and author of Feeding Ethan.  He is a writer, picture-snapper, traveler and a bad Jewish boy who likes his bacon.  He currently resides in Vancouver, BC.  Twitter: @EthanAdeland

Being an early riser is what works for me. I have dedicated time for writing every morning and I can get things done from my armchair with the help of 3 morning lattes. 😉

My mindset is “treat it like your job”. That’s what got me to the point that it actually is.

This is so timeline. I have been struggling with this of late and as a result have 3 or 4 unfinished posts on the go at all times. I like the idea of 30 minutes of uninterrupted writing time. I’ll give it a shot and let you know how it goes :).

I’d like to have like 24 more hours in my day. No kids here yet, bur darn, the distractions are everywhere. Like my community garden, making supper, going to the gym…. I’ve been a major slacker since I started training for a marathon and after too. (Cause you need to recover, right?) Nevertheless, I really want to get back into the swing of things. Maybe 30 min writing per day or every other day will help.

I use a website called Eggtimer to time my writing periods, along with breaks. It’s done wonders for my blogging, and boosted productivity in other areas of my business, too.

I’ve used eggtimer too! I’ve also thought about trying Concentrate for the Mac but it has a price tag. For a procrastinator like me though, it looks like it would be really useful…
And lists… totally. My productivity goes up by 1000x when I make a list at the end of each day for the next one. I find the quality of the list makes a big difference too – like starting each item off with a verb. ex: Call Jane. Write intro paragraph for post x. etc.

I love the satisfaction of crossing things off my to-do list! That’s a big motivator for me.

Some great tips here. Thanks. I like the active verb lists and will try eggtimer. As a family we’ve also got Wunderlist. Great for jotting categorised to do things and you can share folders, eg Groceries. It is a free app that works across platforms ie PC, Iphone and pad…

I like to blog early in the morning when no one is up, or when no one else is home.
Not having other browsers open and not eating at the computer would definitely help me.

I started noticing what time of day I’m at my most productive writing-wise, which for me is in the evening. I’m usually able to bang out a blog post in one evening, whereas it will sometimes take me all afternoon to get one sentence written. But knowing this allows me to be more productive with other things (ie, life!) at other times! Having a to-do list is also a huge help. I use the Notes app on my iPhone and it syncs with a Note my email account, so I have my list with me on the computer but can take it with me and add to it wherever I go. Also good for those times when I think of something right before bed and I swear I’m going to forget it by morning unless I write it down RIGHTNOW!

Oh my goodness, I needed this post 🙂 Step away from the Candy Crush! Haha. But seriously though, it is so easy to get distracted! And I’ve been more distracted than ever lately.
For myself and other parents of little ones having things to entertain the kids(unless they’re napping) while I get things done is essential! I always have a snack ready to go so I don’t have to make anything while I’m working and I love playdough, coloring books, stamps, watercolors and so many other things to keep them occupied while I work. They love to help cook and bake and now the older ones even help me out with my photo shoots a little too, but if they get bored there are always other things to do 🙂

Thanks for the great tips Ethan. I get distracted easily so now I schedule 30 minutes a day in the afternoon for writing, make lists and I also use Eggtimer. So far it’s working as along as I close the windows on my screen that I don’t need.

Found you via Twitter. Good tips! I believe in the power of lists and crossing off items gives such a tangible burst of pleasure and accomplishment. After reading through the comments I have to go check out this Eggtimer everyone talks about.