This week’s Canada’s Craft Beer post comes from our Ontario and Quebec craft beer guy, David Ort. Today David discusses the ins and outs of selling craft beer in Canada and abroad with one of the founders of Trou du Diable brewery.

Speaking very generally, the beer list from Canadian craft breweries divides into two categories: those that focus on a few core brands (usually quite mainstream) and those that push the envelope with more experimental, special releases. Quebec's Trou du Diable is a rare example of one that falls into the latter category without feeling trendy. Their beers range from some of Canada’s best-regarded sour ales to sessionable pale ales.

Trou du Diable (TdD) started as a brewpub based in Shawinigan, which is famously home to Jean Chretien. It also boasts our country’s second tallest waterfall and the turmoil at the bottom is called “the Devil’s hole” or “trou du diable” in French.

I first had the opportunity to try their beer and meet two of the co-owners, André Trudel and Isaac Tremblay, at an event held at Bellwoods Brewery in 2012. Dulcis Succubus, a saison that is made tart by the Brettanomyces it picks up from aging in wine barrels infected with noble rot, made a lasting impression and remains one of my favourites.

"It started with André brewing in his basement,” Tremblay says of how Shawinigan got its first craft brewery in the early 2000s. “He became so good at one point that it would have been a sin not to present this to the world."

In a bit over a decade, they have grown to become one of the biggest craft producers in Quebec. About the coming years, Tremblay says, “We’ll still have a little bit of growth. Right now we brew around 15,000 hectolitres and we have a theoretical capacity of 20,000. For that, we’ll need to work a little bit on our distribution and export activities."

Compared to the early days — when, like many craft beer founders, his job was to do whatever was needed that minute — Tremblay’s role at TdD has become more administrative. “I answer questions and give directions, but the only things I really do is government approvals and meeting bankers,” he says, half jokingly.

By working with agents, their beer is represented in every Canadian province and available to licensees. Tremblay is also excited with their success representing Quebec’s craft beer industry abroad as exporters. In particular, France has grown into an important market for them.

“With the internet, trends become universal very quickly,” he notes. "So, in France, they have the interest in craft beer right now.” But, luckily for Trou du Diable, the the local producers are only barely catching up with demand.

RELATED:  The PR Desk: How to Be Nice (Even When it’s Negative)

We got to talking about what styles do well in such a wine-focused country and when I suggested it might be their tart, wine-like options, he said, “I thought that the barrel-aged beer would be popular, but it’s only starting to pick up.”

Apparently, much of this is due to price sensitivity. TdD needs to charge a premium for these special offerings because of the time and material cost that go into making them, but there's still a view in many parts of continental Europe that beer should be noticeably cheaper than wine.

Instead, Tremblay says, “What they really want right now is IPAs and American-style pale ales, which don’t travel very well.”

So, they do their best to only ship enough beer, especially short-lived, American-style hoppy pale ales, to meet demand while it’s still fresh. 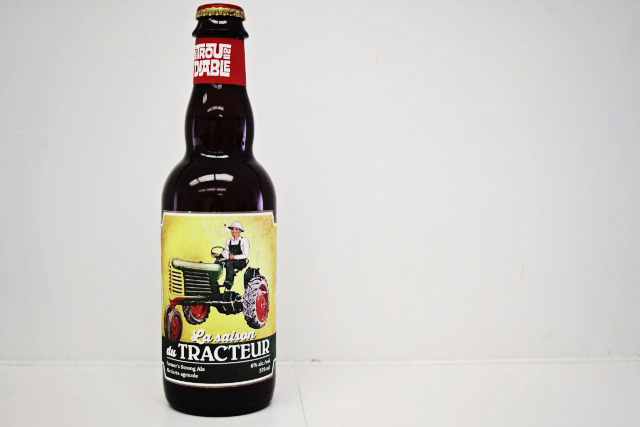 Both abroad and in Canada, Saison du Tracteur is one of their strongest sellers. Keep6 Imports is bringing the French-style saison with a noticeable dose of American-style hopping to the LCBO in Ontario. Its name is a cute play on the idea of a “lawnmower beer” (usually easy-drinking, not very complex beers for hot afternoons of suburban yard maintenance) because it manages to be both approachable and complex.

By May, Mellifera will join Tracteur at the LCBO. It’s a kettle-soured saison with added honey that Tremblay describes as: "bone-dry so you get the floral taste of honey and the version this year is quite sour with a nice, subtle hopping."

Both saisons are widely available in Quebec and already available in Ontario. “It’s always cool to have a big release at the LCBO once or twice a year,” Tremblay says about their availability, "but if you want to try a great diversity of Trou du Diable stuff then check out keep6’s website to see what’s available."