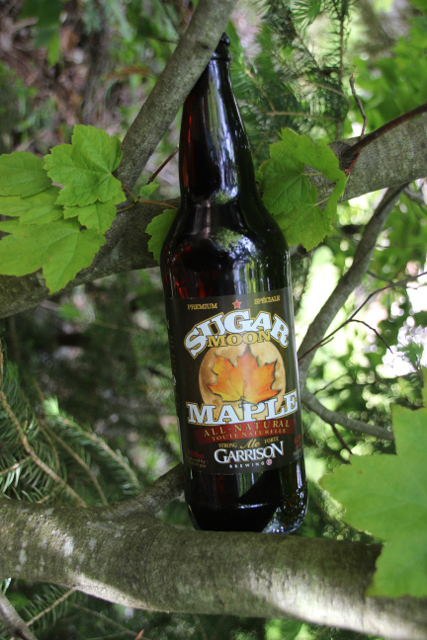 This month I look at a couple of beers that put a little local in every beer. What I mean is adding something local that isn't normally in beer, an adjunct. There are many uses of adjuncts, including the dark side of  cost cutting by using unmalted grains to the more positive of adding different flavours to beer and improving mouthfeel, head retention and clarity.

The first one is a spring favorite of mine that uses maple syrup from a local sugar bush and the other is a great summer beer with PEI blueberry puree added.

Every spring as the snow recedes and the days get warm I look forward to the sap running to make syrup. Not too long after that Garrison Brewing partners with Sugar Moon Farms and produces their strong ale. The beer is light brown with an off-white head. The aroma is sweet with maple and maybe just a hint of hops. The taste is maple, malt and caramel. It's sweet, not over the top but just right. It's a great beer for dessert or on its own, but I couldn't imagine ever drinking more than one at a time.

PEI Brewing adds real blueberry puree from PEI Berries Ltd. during fermentation, adding the flavour and a slightly purple colour to the beer. The beer is golden in colour with a purplish tinge and a thin white head. The aroma has blueberry, unsurprisingly, as well as floral notes and a little maltiness. The taste is quite light with a little berry and sweetness. This ale is smooth and refreshing with a good amount of carbonation. I enjoy Blueberry Ale on warm days or with summer salads.

These beers are a couple of the extra local beers that I enjoy.

Todd Beal follows the craft beer scene closely in the Canadian Maritimes and reports on it weekly on his blog, Maritime Beer Report. He is asked to comment frequently on television, newspapers and magazines as a craft beer expert. He can be heard Friday afternoons on News 95.7 commenting on beer. Visit his blog and follow him on twitter @MaritimeBeerRpt.