Where To Eat This Weekend: Winnipeg Edition

We're back with Restaurant Roundup for 2015!  This year's theme: Where To Eat This Weekend.  Every other week we'll be profiling a different city in Canada with a list of great dining recommendations for you to check out - from fancy to hole in the wall and everything in between!   Today food writer Kathryne Grisim take us on a tour of  Winnipeg restaurants to check out this weekend in the heart of the country!

Winnipeg recently hosted a number of the FIFA Women’s World Cup of Soccer games and my husband and I accommodated many visiting fans in our home. They were attracted to our urban neighbourhood of River Heights (and adjacent neighbourhoods) because of its proximity to Investors Group Field and also the bevy of exceptional restaurants within walking distance or a mere bike ride from our home. Most asked for recommendations as to where to eat and we were thrilled to share our favourites.

Where To Go For Lunch in Winnipeg 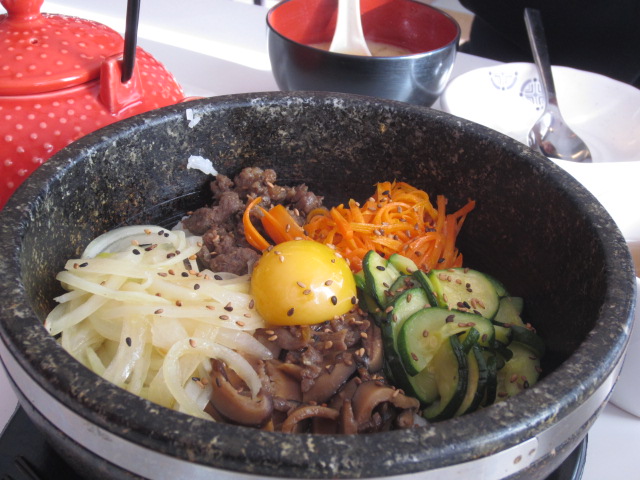 Starting with lunch, Kudara Sushi is inauspiciously located by the 7/11. I highly recommend that you select from their Korean menu (although the sushi is excellent). If you order a dish called Bibim Bap you can expect a hot stone bowl to arrive at the table heaped with steamed rice, stir fried veggies, marinated beef and a glistening egg yolk. The dish was my first foray into Korean cuisine. Had my Korean food expert not been with me, I would not have known that the contents of the bowl were meant to be stirred up immediately so that the egg adhered to the other ingredients and got cooked by the heat radiating from the bowl. The rice that was at the bottom of the basin was crunchy. As a result, the complex flavours included sweet, savoury, tangy and salty and the textures ranged from silky to crispy. With the taste of one dish, I was hooked on Korean food!

So many plates at Bonfire Bistro are worthy of highlight but the clams, spicy sausage and artichokes from the antipasti section of their lunch menumerit special note. On the day I last visited, I was trying to restrain myself because I knew I was going out for dinner that evening (oh, the life of a foodie) so I tore pieces of the grilled Portuguese water bread and dipped them into the saffron marinara sauce and nibbled on the sausage and artichoke. 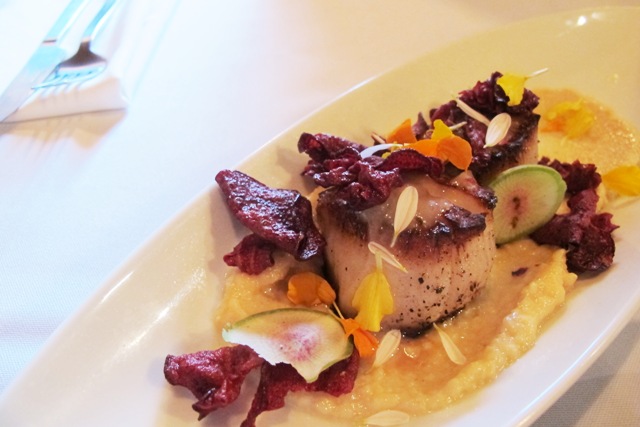 Housed in another inauspicious storefront and contained in a little retail strip is Chew Bistro. Upon our arrival, a basket of fresh hot bread was placed in front of us with a ramekin of marrow butter. The bread was yeasty and delicious on its own, perfection when smeared with the butter.

Two enormous seared sea scallops subsequently arrived on a creamy puree with crispy chips for crunch. The scallops were crusty on the outside and just barely cooked on the inside, exactly the way I like them. Wild mushrooms were made rich and creamy when the poached egg yolk that was perched on top seeped through the earthy flavours from the forest. Totally unnecessary, but a delight just the same, were the truffle fries that we indulged in as well. The hint of precious truffle oil elevated the already memorable fries to a whole new level. 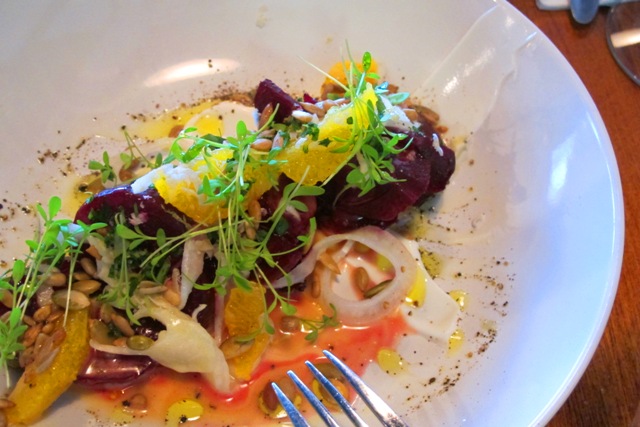 For dinner in River Heights, Enoteca is high on my list. On my last visit, we were celebrating a sibling’s birthday so we let the guest of honour choose a couple of small plates to start us off. First up were roasted beets and oranges accompanied by shards of fennel and horseradish, and garnished with toasted pine nuts and pumpkin seeds along with a cool ladle of labneh (strained yogourt). Olive oil may have been drizzled onto the plate or perhaps the sparkling ingredients simply oozed their natural juiciness.

Along next was freshly made fettuccine with lamb sugo which I would describe as a meaty broth (literally meaning the natural juices of a roast). Chevre and a second sauce of parsley, garlic and lemon zest adorned the top and floated around the edges of the dish. The essence of the dish was sauce perigeux, which is made with Madeira and decadent and earthy black truffles. Just a little of the latter goes a long way. This and all the sauces were so heavenly that we did something that we should have done at the start of the meal: we ordered a bread basket to lap up the sauce. The attentive serving staff tried to clear the plate a couple of times, but we continued to grasp it until the toasted bread arrived. 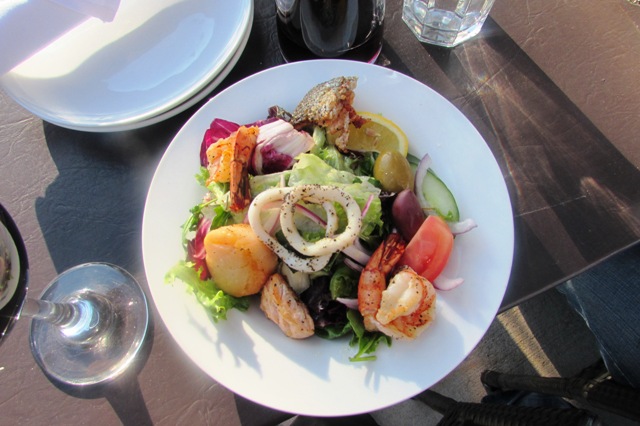 Just across the street is Mona Lisa Ristorante Italiano, serving the most amazing seafood salad. The kitchen accommodated us by splitting the salad onto two plates. With a crisp glass of wine from their varied selections, we spent a perfect evening on their patio. 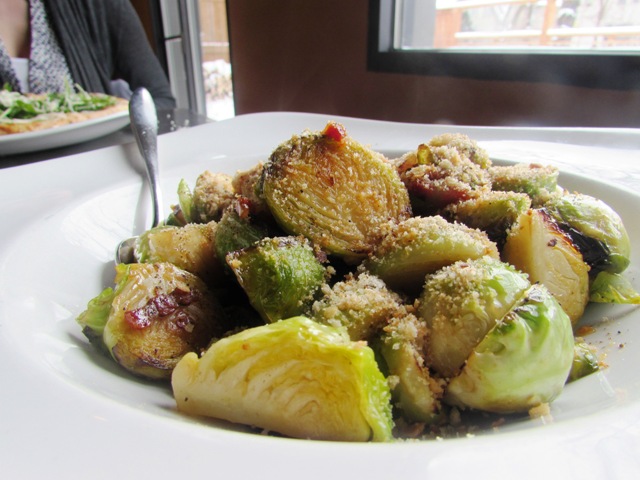 Pizzeria Gusto is another favourite. Their pizzas are a work of art and everything tasted has been sublime. I go for their small plates of seasonal vegetables like cavolini (Brussels sprouts) tossed with pancetta, chilies and chili oil, and sprinkled with toasted bread crumbs.

Other Fun Places To Dine in Winnipeg

Thom Bargen is Winnipeg’s answer to a coffee parlour. Just across the river in the adjoining neighbourhood of Wolseley, it’s a bike ride away. People around me were commenting on the deliciousness of the blueberry rooibos, the double shots of espresso and the cinnamon buns.

Everything this little place serves is a labour of love. As is often the case, it starts with the best of ingredients. The pastries are all from Jonnies Sticky Buns, a fabulous bakery in the same neighbourhood.  The coffee is slowly coaxed into bloom by constantly swirling boiled water through the grounds in a cone filter.

Saving Winnipeg’s most prestigious restaurant for last, 529 Wellington is housed in a restored vintage mansion. The restaurant provides the ultimate steakhouse experience. I recommend their riverside patio. We love to visit for an after-work cocktail and a nibble, which often substitutes for dinner. We recently enjoyed their stack of dry ribs and a perfectly poured martini.

Where to eat this weekend in Winnipeg? Just ask....

Where Else To Eat This Weekend

Where To Eat This Weekend: Winnipeg Edition was written by Kathryne Grisim.  Kathryne, the creator of Food Musings, loves sharing stories of the Winnipeg culinary scene with readers.  She has lived there all her life and thinks that it is the perfect location from which to travel the world.  Next stop: touring the tapas bars of Spain!  Connect with Kathryne on twitter at @FoodMuser and on Facebook.