This week’s Canada’s Craft Beer post comes from our Eastern Canada craft beer guy, David Ort and he takes a look at double IPAs in Ontario and Quebec.

Hops are essential to beer. All of the snap, crackle and pop that we recognize in many of the most vibrant and flavourful examples, I'd say, come from this bitter green herb. Finding new ways to use newly developed hop varieties, in previously unimagined quantities or madcap techniques, seems to be a key plank in the current craft beer mission statement.

Few styles can equal the hoppy-ness of a double IPA and this week we have two outstanding examples. But first some background.

As commonly told, the history of India pale ales is more mythology than fact. Lots of beer was sent to the British colonies in India. The lion's share of it, in particular for common sailors and soldiers, was porter. Well-to-do traders, civil servants, and officers were just as likely as anyone else to buy into a fashionable trend and that meant drinking pale ales. The ones in fashion during the first half of the 19th century (when India was also on everyone's mind) happened to be well-hopped.

So, the original style was born more out of marketing happenstance than what made the most sense for shipping beer to the other side of the world. Once the craft brewers of the late 20th century had mastered this category, they moved on to double-down on their bet that customers wanted bitter, hoppy beers and started to make Double or Imperial IPAs.

Twice the hops usually also means a significant boost in alcohol, so this style is about contemplative sipping more than thirst-quenching pints. 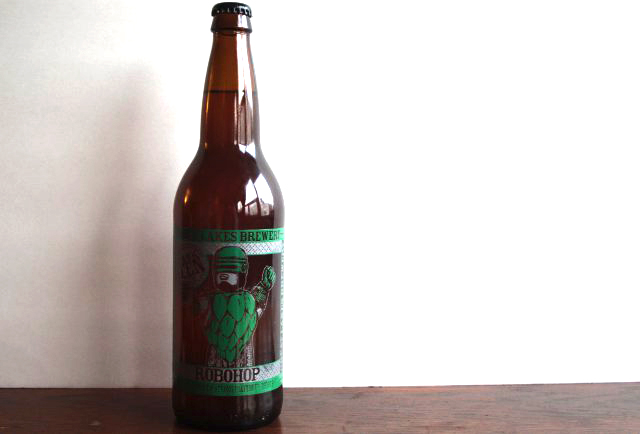 Great Lakes Brewing RoboHop has a deep amber-gold body topped with a frothy, off-white cap. Its aroma is all caramel-sweet malt and straightforward citrus. The flavour is more layered: grapefruit meets tropical fruit and pine with more sweet malt for balance. The finish is crisp and bitter. This one is a top-notch choice from start to finish.

This Charlevoix double IPA from Baie-Saint-Paul, QC showcases the clean bitterness of Summit hops. In a beer tulip it's clear amber with a resilient head. For both the aroma and flavour, I found lots of grapefruit with a dash of green grass. In both cases, bready malt does what it can to compete with the bitterness.