Canada’s Craft Beer Eastern Edition: This Label Says It All

This week’s Canada’s Craft Beer post comes from our Eastern Canada craft beer guy, David Ort. He's taking a look at how craft brewers like Great Lakes Brewery and Brasserie les 2 Frères distinguish themselves by the design and informative content of their labels. 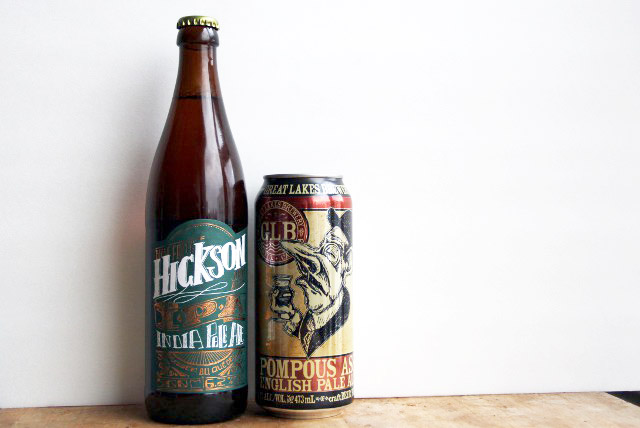 We may never settle the debate on whether "craft beer" is a worthwhile or suitably accurate label. I thoroughly agree with Stephen Beaumont's assessment that it's a useful term for the very simple reason that it's understood by most people who hear it.

Rather than spending more lines on the discussion of a marketing term, I'm going to take a more literal look at craft beer labeling. As the giant brewers fight tooth-and-nail to keep the Canadian government from requiring that they list ingredients (partly because it would mean admitting how little barley their rice-and-corn dominated recipes call for), their smaller competitors are going way beyond just ingredients and stating IBUs, preferred serving temperature, glassware suggestions and even recommended food pairings.

Beer that comes with an instruction manual printed on each package seems the perfect representation of the current consumer mindset where no one has a favourite brand and therefore might not know how bitter a beer is, what temperature it should be served at or whether it will be at its best in a beer tulip or a nonic pint glass.

By listing the varieties of hops and malts they use, craft brewers are also recognizing the strong possibility that some aficionados will want to engage with their creations on a thoroughly substantial level. Sure, many just want something hoppy and flavourful, but there's also a segment of the market who know the difference between Citra and Centennial hops and might put the information to use creating home-brewed clones of their favourite beers.

These two ales are good examples of how craft brewers can set their product apart with attractive and informative labels.

Both the front and back of this beer from the award-winning Etobicoke brewery deserves a healthy dose of attention. Artist Garnett Gerry created the illustrations for many Great Lakes favourites including Canuck Pale Ale, Audrey Hopburn and this one, Pompous Ass English Pale Ale. Fabian Skidmore — who is also proprietor of The Only in Toronto — is responsible for the graphic design.

The Pompous Ass can recommends serving the beer between 3 to 5C in a pub pint. I might go even a little bit warmer than that to further enhance the fine balance of grassy-earthy balance between the hops and malts on the nose. Moderate carbonation and a quick, pine-laced finish land this one squarely in the sessionable category.

I don't think I can objectively prove it, but it seems that Quebec breweries lead the country in terms of informative labels. The Hickson IPA by Brasserie les 2 Frères in Terrebonnes, QC. As well as naming the specific malts and hops included in their recipe, the brewers of this IPA give an exact IBU (53) and original density of their beer (15.9P). While the former is the increasingly familiar indicator of a particular beer's perceived bitterness, the latter is, roughly speaking, a measure of its potential alcoholic strength.

The Hickson IPA is an elegant example of its style. From its clear amber appearance to the delicate stone-fruit and citrus aroma mix, this beer avoids much of the heavy handedness of some IPAs. The crisply bitter finish invites a second sip, and then all too quickly a second bottle.

Looking for more? Check out all of David’s posts on Ontario and Quebec Craft Beers.