This week’s Canada’s Craft Beer post comes from our BC craft beer guy, Bryan Clegg. Today Bryan gives us the benefit of his travels in BC, providing a guide to great craft beer in a city best known for its wineries, Penticton. He reports in from three breweries: Tin Whistle, Cannery, and Bad Tattoo.

This month I’ve hit the road for our brewery profiles, and today I’d like to talk about a city not really known for its beer — Penticton!

Located on the southern tip of Okanagan Lake, Penticton is right in the middle of wine country. Given its location, it’s pretty fair to say that, in the hearts and minds of locals, beer has taken a backseat to wine over the years. But that doesn’t mean there isn’t a beer scene in town, one that's growing every year.

I stopped in at a few local breweries to check things out: Tin Whistle, Cannery, and Bad Tattoo.

One of the BC originals (the 12th brewery in BC, I was told), Tin Whistle — named for a locomotive on the Kettle Valley Steam Railway — has been producing beer since 1995. The current owner, Lorraine Nagy, took over in 1998 with the intention of it being a five-year project in retirement. Well, she’s still going strong, as is her brewery.

Four of the current flagship beers are the same now as they were 20 years ago: Coyote Blonde Ale, Peach Cream Ale, Black Widow Dark Ale, and Killer Bee Dark Honey Ale. At first glance, this may suggest a brewery that adheres a little too strictly to tradition, at the expense of innovation. But thankfully that isn’t the case, and I was easily able to pick out four tasters without dipping into those originals.

The ones I tried (Fresh Hop, Midnight Peach, Hands Up Red, and Mosaic Express) were all pretty decent, with Midnight Peach winning my vote for best of the lot. The blend of chocolate and peach notes really worked for me, and it’s one I’d definitely have again.

I feel obliged to bring up the decor, particularly when compared to Cannery and Bad Tattoo. I felt more like I was walking into a used goods store from the early 90s than a brewery tasting room. I’m not judging on this, I only bring it up to say that if you’re looking for a cool, hip place to hang out with your friends, this isn’t it.

Another local brewery that’s been around a while, Cannery has been operating since 2001. Their original location was an old fruit and vegetable cannery (from whence they got their name), but they outgrew the old location and in 2015 moved into fancy new digs in downtown Penticton.

As a place to hang out, Cannery gets some solid points. Lots of space inside, an outdoor patio, as well as games to entertain. On the food front they have a number of options ranging from nachos to ice cream. Most important, of course, are the drinks, of which there are plenty. With 10 different beers pouring when I visited, along with three wines, there’s something for everyone.

Readers may remember that Cannery has a place in my heart for producing the Maple Stout, one of my favourite beers for making beer pancakes. And if it were available I certainly would have had a glass, but alas, it wasn’t. What was available, however, was plenty tasty. I had the Knucklehead Pumpkin Ale, which, admittedly, falls low on the scale for me — not nearly enough pumpkin spice. But I also had the Blackberry Porter, which dishes out a nice dose of coffee layered with blackberry notes. The Naramata Nut Brown and the Apricot Wheat are two solid entries.

The relative new kid on the block, Bad Tattoo opened as recently as 2014, but if the mass of people at their establishment is any indication, they’ve already made quite an impression.

Bad Tattoo, I’ve gotta say, is pretty cool. The space is huge, with a giant covered outdoor area and a bustling inner room. Packed tables everywhere and a line of people out the door speaks to the popularity of this spot. But it’s not just about the beer — Bad Tattoo is also famous for pizza!

Sadly, I’d already eaten so I didn’t partake of the pizza. But if I were ranking the quality based on how good they are at tossing them in the air and catching them … then I’d say their pizza must be pretty damn great. Or I could just look around and see all the tables filled with people eating pizza. Turns out that’s a pretty big draw all on its own. That’s a lesson the ownership team learned early on.

Originally the plan was the sell pizza by the slice, but on their first day they sold 300 full pizzas. It didn’t take long for the plan to change. Soon pizzas were a full feature, and Bad Tattoo became Penticton’s hottest pizza spot that also serves craft beer. Or craft brewery that also sells pizza. It works either way you want to say it.

So what about the beer? 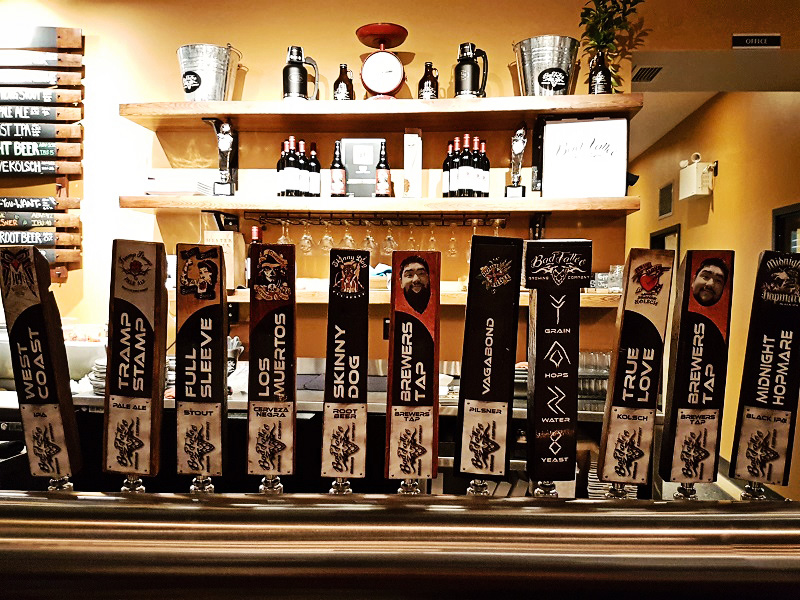 Of the ones I tasted, the Azacca What You Want stood out the most for me. The azacca hop character came out with bright tropical notes, citrus, and light bitterness. I’m also a sucker for New England-style IPAs.

In conclusion, Bad Tattoo, Cannery, and Tin Whistle (along with Highway 97 Brewing, which I didn’t get to visit) are proof that wine and beer can indeed live side by side, even in places you wouldn’t expect. So if you’re in wine country and find yourself craving a brew, Penticton won’t leave you dry.

Come to Barley Mill Brew Pub next time your in town.