This week’s Canada’s Craft Beer post comes from our Atlantic Canada craft beer guy, Todd Beal. Todd shares the history of PEI Brewing and takes us on a tour of their brewery and event centre, while sampling some brews, too. 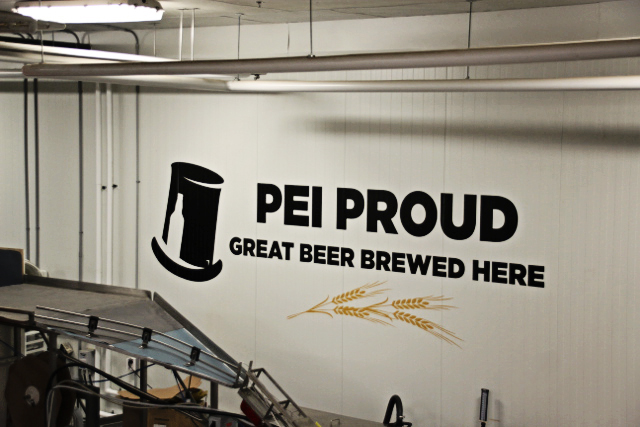 To discuss PEI Brewing I'll go way back to the beginning of craft beer in Canada's smallest province. It's a history of continual expansion and twists and turns. There were no breweries on Prince Edward Island for over 90 years until Island Breweries opened in 1984. Sadly, this brewery only lasted three years, leaving the Land of Anne without a brewery for another decade.

Today Gahan House continues to brew seasonal and specialty beers at its location on Sydney Street. It opened another brewpub under the Gahan brand on the Halifax waterfront in 2014, and is coming to Moncton, New Brunswick in 2018. Currently Kyle Jeppesen brews at Gahan Halifax and Trent Hayes brews in Charlottetown. The pubs offer great dining options, definitely a step up from pub fare, and on tap are house beers: Gahan, PEI Brewing, and another brand they own, Rogues Roost.

I've visited many breweries in the United States, and PEI Brewing's brewery on Kensington Road would rival any of them. It serves as a tap room, cold beer store and event centre, and I'm told it's well utilized. Walking into the expansive tap room you can see the use of reclaimed wood and items throughout, all the awards it's won for its beers, and the bar. The tap room offers pints, half pints and sampler trays as well as snacking food during select times. Along the walls is a visual history of the company with a plaque for every major milestone. There are brewery tours from the tap room that last about 40 minutes and will take you up to a catwalk above the brewery and right into the action.

The event centre was set up for a wedding the day I visited, but is used for events from music to comedy and everything you can imagine. Inside, a pizza oven delivers fantastic pizzas.

Their most popular beers are Beach Chair Lager, Sir John A Honey Wheat Ale and Blueberry Ale, depending on the time of the year. My personal favourites are 1772 IPA that has lovely bitterness, Sydney Street Stout that's roasty and malty, and Transmitter Coffee Stout made with locally made coffee with its lovely flavour. Their portfolio of beers has something for everyone, from hoppy to malty and everything in between. There are casks on at the tap room very often.

For any beer fan visiting PEI, this showcase is a must-visit to sit and enjoy some great beer.

Visiting PEI This Year?  Here's our suggestions of Where To Eat on Prince Edward Island.