This week’s Canada’s Craft Beer post comes from our Eastern Canada craft beer guy, David Ort. It's that  time of year — yes, it's pumpkin season, so he's taking a look at pumpkin beers in Ontario and Quebec.

Is it time for pumpkin beers already? Absolutely. It’s now officially autumn and that means time for the best-selling seasonal style of craft beer. Even more than IPAs or craft lagers this category is a gateway into well-made beer for those who usually drink wine or spirits, but can get behind a festive push.

The way I see it, there are two methods to approach the signature fall seasonal: either cover your Thanksgiving table with every option available for a battle royale taste test or spend the next few weeks carefully sampling. The hard drinking of the former option doesn’t necessarily mix well with a family get-together, so to start you off on the latter, I offer two of my favourites today.

Before we go further, I should acknowledge the dull howl from the (out-numbered) pumpkin beer skeptics. The seasonal, harvest branding does start to ring a bit hollow when you consider that these beers are on shelves by Labour Day and therefore definitely aren't made from the production of this year’s patch. And then, in the glass, it’s obvious that the aromas and flavours are driven more by pumpkin-affiliated spices than anything else. I’ve found some peace by remembering that this isn't the only style that doesn’t rely on only malt and hops for flavour (cherry kriek, anyone?), and by thinking of them as “pumpkin pie beers”; hopefully that helps you as well.

I hope these two recommendations will start your exploration of pumpkin beers in plenty of time to be ready for Thanksgiving in less than a month. 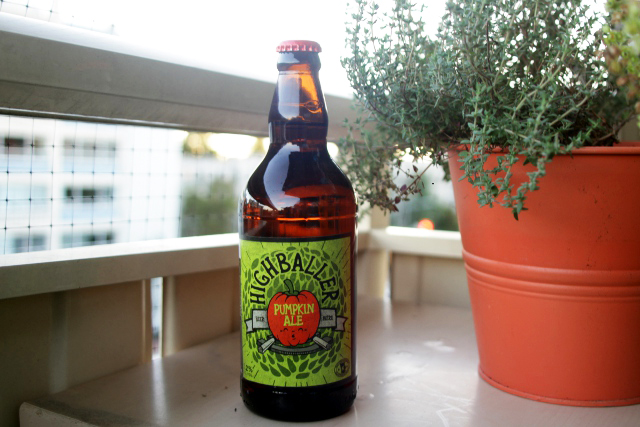 This pumpkin ale from Grand River Brewing has a beautiful, sunny gold body and a quickly diminishing head. In common with most in the category, the warm pie spices (especially cloves) announce themselves as soon as the cap comes off the bottle. The earthy sweetness of pumpkin (and malt) is balanced by a subtle note of apple cider vinegar. Each sip ends with a touch of vanilla, allspice and a tame hop bitterness. Not quite pumpkin pie in a glass, but remarkably close.

The deep orange-brown colour (that would work just as well as a fuzzy sweater or woollen scarf) sets the autumnal theme nicely. The aromas of dessert spices get an intriguing snappiness from more ginger and cinnamon than usual. Calm carbonation and rich maltiness had me thinking of pumpkin cake. The finish comes in with more cinnamon and if you can handle that, then St. Ambroise Pumpkin Ale might be the Thanksgiving dessert beer for you.

For more great pumpkin craft beers to try this season, check out our Bryan Clegg's post on BC Pumpkin Beers.

I’ve never come across the pumpkin ale from Saint Ambrose… I shall have to look for it at the local IGA or Metro Plus. I am neutral about pumpkin, so it would be interesting to see how it would taste. I can even see a soup made with it… hmmm….

What? Pumpkin beer? I had never heard of this before, sounds intruiging….but also very strange. Well, sounds like I’m gonna have to give it a try to find out. Any suggestions for the best “beginner-pumpkin-beer”? 🙂

Today, pumpkin beers are typically brewed to offer the flavours of spice and pumpkin pie. People have been using pumpkin for MANY years, back when malt was limited in North America. The sugar from the pumpkin meat allowed for fermentation. Hannah, Great Lake’s Brewery offers a pumpkin ale that’s great for ‘beginner’ pumpkin beer drinkers: http://greatlakesbeer.com/index.php/beer/pumpkin-ale/. Cheers!