This week’s Canada’s Craft Beer post comes from our Ontario and Quebec craft beer guy, David Ort. Today he's looking at all the Ontario craft beers, in a manner of speaking, through reviewing The Ontario Craft Beer Guide by Robin Leblanc and Jordan St. John.

The co-authors graciously made time to chat with me about the ins and outs of their guidebook. For St. John, this is his fourth book since 2012; LeBlanc runs her award-winning blog, The Thirsty Wench, and this is her first book (she's also an FBC Member!).

Up front, they took every opportunity to emphasize that while this book will interest aficionados, they recognize that 90 percent of Canada's largest beer market is still mainstream, macro-beer drinkers. To my mind, they have done a great job of keeping their profiles and reviews at a level that will appeal to the everyday drinker.

One of my favourite aspects of The Ontario Craft Beer Guide is the spartan tasting notes. "State of Mind is a light session IPA with orange, grapefruit, and pineapple, with very little bitterness," and "Muddy York Porter has a nice cocoa flavour, with subtle coffee notes and a smooth, marshmallow-like finish" are two complete examples of their straight-to-the-point, not formulaic beer reviews.

On the topic of how Ontario matches up to Quebec, LeBlanc says, "They're not terribly comparable; two different universes because of provincial laws."

Expanding on that theme, St. John notes that Ontario's industry is now growing much faster than Quebec's and goes on to add that he thinks, "Things have switched [stylistically] from five years ago."

That means they both see Quebec craft breweries concentrating on cask bitters and gentle, English-style ales while Ontario's have picked up the torch for big IPAs and imperial stouts.

Speaking of that steady — some would say runaway — growth, their guide is very honest about the fixed-in-time nature of the information. Digital sources, like crowd-rating site RateBeer.com, will still be a more up-to-date and (in some cases) complete source of information, but The Ontario Craft Beer Guide will be on my shelf in ten or twenty years as a reminder of the remarkable expansion in 2014-15. 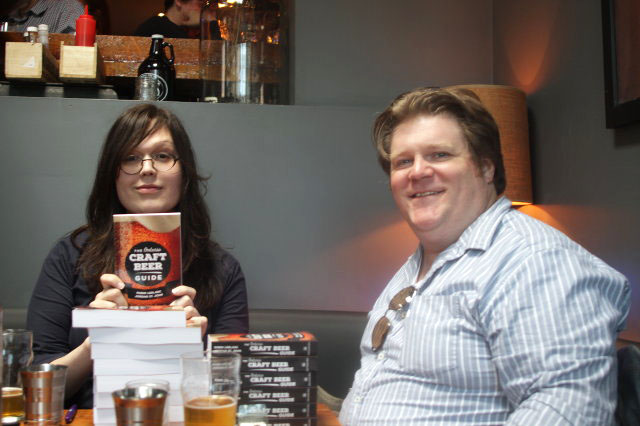 To meet my cajoling for a spontaneous update, LeBlanc notes that since they submitted the manuscript in November 2015, both High Park Brewery and Blood Brothers have fine-tuned for the better. "Collingwood's Rockwell Pilsner has only gotten better," adds St. John.

Because of the guidebook format every brewery, whether in business for decades or brand new and barely brewing, gets roughly the same amount of space, so I asked where they would have liked to devote more focus. St. John jumped right to the IPAs from Great Lakes Brewery in Etobicoke and noted that they were the only beer maker to get two 5-star ratings (for Thrust! an IPA and Robohop, with Karma Citra barely missing the trifecta with a 4.5). But then he jumped to also complimenting hidden-gem High Road Brewing Company in Niagara and Toronto's Folly Brewpub for their tightly-focused range.

I wish they had found a way to add photos to the text. If it's the people that make craft beer interesting, it would have been good to look some of them in the eye and see what their breweries look like (beautiful, in many cases) before we pay them a visit.

Inspiring those tourism-boosting beer trips was a key goal for the co-authors. As a starting point, LeBlanc recommends heading to Sawdust City's Gravenhurst tasting room and then circling back around Georgian Bay to Collingwood's cluster of excellent breweries.

I remember talking to Paul Hadfield of Spinnakers in Victoria about how he would sneak out to his brewpub's parking lot, in the business's early days in the 1990s, to see if he could spot the guidebooks (usually in the rear windows of cars or tucked beside the driver's seat) that were bringing in his clientele. As this guidebook finds its way into the hands of Ontario's beer drinkers, many local and far-flung brewers will likely have a similar experience.

In The Ontario Craft Beer Guide, Robin LeBlanc and Jordan St. John have done an admirable job of profiling Ontario's dynamic and expanding beer industry. Apparently, they've also managed to get it on shelf in many brewery bottle shops, so it won't be hard to find, but just in case, it's also available online.

I bought the kindle version, I have been buying Craft Beers for a very long time now. Thanks!