This week’s Canada’s Craft Beer post comes from our BC craft beer guy, Bryan Clegg. Today he checks out rye beer, which is enjoying a resurgence in the BC market. Check out the rye beers he reviews from Steel & Oak, Dead Frog, Bomber, Doan and Spinnakers.

In the very early days of brewing, rye grain was commonly used. It wasn’t so much a case of choosing which grain to use for a specific purpose, but more a case of using whatever was available. But over time rye beer (Roggenbier in Germany), like many of the styles we’ve talked about in this space, fell out of favour. It was considered a more useful bread grain, and was used as such. Usage became limited to a handful of breweries.

But rye beer has been coming back, and coming back hard, especially in the now common Rye-P-A. It’s a rare day indeed when I visit my local beer store and can’t find at least one rye beer. And rye not? Rye adds something a little different from a standard barley malt. Rye beers often have a more reddish hue, and can give a nice spicy, bready flavour. In some cases rye can bring additional chocolate, caramel, toffee, or biscuit characteristics.

What’s nice is that when I see a rye beer on the shelf I almost always pick it up. In my opinion rye is great, and I find it to be almost always an interesting addition to the brew in question. So this month when I was beer shopping and I noticed no less than four different rye beers on the shelf, I knew it was time to share.

Roggen Weizen is a blend of rye (roggen) malts and hefeweizen, and continues Steel & Oak’s tradition of releasing German-themed beers. This dark brew pours with a large, off-white head and boasts spiced banana on the nose. On the label S&O writes, “Malty. Banana. Clove.” and that pretty much sums up this beer. The flavour is big and thick with spicy banana and biscuity notes running through. Really good.

Dead Frog has been in a renaissance for the last few years. They went from a brewery with beers I had little interest in, to making a lot of really interesting and tasty brews that I’m always happy to try. They come in today with North America’s most common form of rye beer, the Rye IPA. It’s nothing out of the box, but they do it well: with the hops bright on the nose and a bit of rye spice. Then it hits with a touch of citrus hops, but actually it leans somewhat more to the earthy side, as the rye brings in a nice and spicy malty chewiness. I think these flavours play nice together, creating an enjoyable beer. 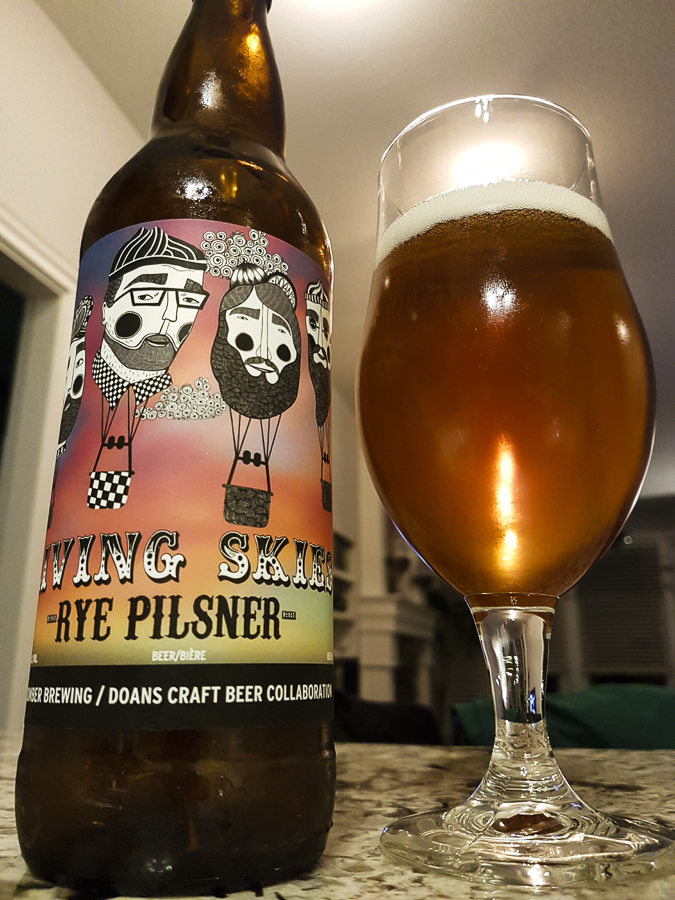 For this collar, Bomber and Doan decided to mix Rye and Pilsner with ... mixed results. If I’m drinking this in a general social setting, then I don’t mind it. The overall taste isn’t at all bad, in fact I even enjoyed it. But going by style, I’m left a bit underwhelmed. The pilsner side of this feels like it’s been completely overwhelmed by the rye characteristics. The rye brings a malty, biscuity flavour, filling the overall profile out nicely. But I just feel like the balance between the rye and pilsner isn’t quite where it needs to be to make for a great beer.

Saison, I think, is a fun style to pair with rye, as saisons are naturally filled with spice. This rye from Spinnakers pours a huge head with a spicy, fruity nose. The flavour is a balanced blend of light fruit with a mixture of saison and rye spiciness, and a bit of the bread rye brings to the table. This mixture works really well, in my opinion.