In this week’s edition of Canada’s Tastemakers, FBC’s Shareba Abdul interviews Richmond Station's talented pastry chef, Farzam Fallah.  At just 23 years of age, this young chef is only in the early days of his career but already he's making his mark in the dessert world! 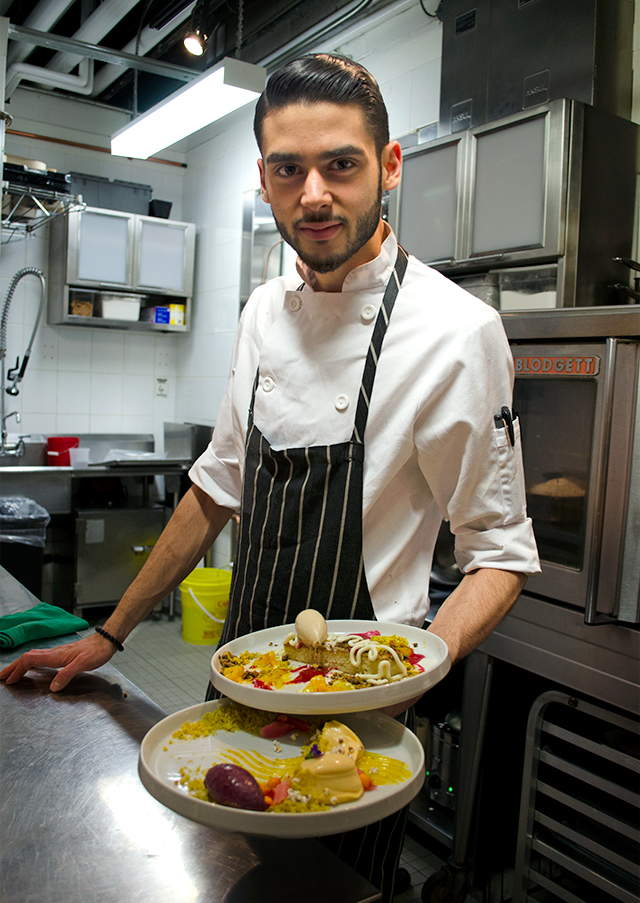 Farzam Fallah is quickly becoming a well-known name in Toronto, and it’s easy to see why. The 23-year-old pastry chef from Richmond Station restaurant creates unique desserts that have garnered the admiration of diners across the city.

After just eight years in the industry, Farzam has already been praised in The Globe and Mail, Toronto Life and the National Post for his culinary skills. He was also chosen to speak at this year’s Terroir Symposium, which was held at the Arcadian Court in Toronto last month. In a phone conversation before the event, Farzam said he was grateful to have been invited.

“It’s such an honour to be speaking to people who have been in the industry longer than I’ve been alive, about something that I feel so strongly about.”

His speech touched upon the evolving food culture of Toronto, as well as the importance of having a strong pastry program in restaurants.

“I take a lot of pride in helping bring dessert to the forefront of Toronto’s evolving food scene,” he said at the symposium. “I hope to show that restaurants who invest in pastry, and pastry chefs, will see the benefits.”

While Farzam acknowledges that having a strong dessert menu can be financially beneficial to restaurants, he also thinks it’s integral to a customer’s dining experience.

“I see dessert as its own course or its own meal,” he said. “To me, personally, I think dessert is entertainment when it’s served in a restaurant setting.”

The creative pastry chef has noticed that light but complex desserts seem to be popular with his customers. As such, he's taken steps to lighten up the desserts at Richmond Station without making them feel any less indulgent. He often makes ice cream without eggs, or uses gluten-free flours instead of wheat flours, to help keep his desserts from being too heavy.

Farzam is clearly doing something right, as the National Post recently named him “one of Toronto’s fastest-rising culinary stars.” That’s high praise for someone who is still in the early days of his career – a fact that’s not lost on this young chef.

“To tell you the truth, I didn’t expect any of this,” he admitted. “I’m 23 years old and I’ve only been in the industry for eight years.”

It certainly helps that the owner of Richmond Station, Carl Heinrich, gives Farzam complete creative control over the dessert menu. His culinary career skyrocketed when he finally was allowed to flex his creative muscles.

“Richmond Station is the first restaurant that really gave me the opportunity to do what I whatever I felt like doing and be creative,” he said. “All the other restaurants I’ve ever worked at already had a set menu and they weren’t really interested in changing or trying new things, whereas Richmond Station is always up for that sort of thing.”

Farzam’s desserts have deceptively simple titles. A new customer reading the description for his White Chocolate Cake dessert would probably envision a pale slice of cake with a scoop of green pistachio ice cream, alongside swirls of tres leche and carefully placed segments of citrus. Instead, what arrives is an abstract piece of art with ingredients playfully strewn across the plate. When asked about his over-simplified dessert titles, Farzam gave a remarkably simple explanation.

“The dessert menu had to be in line with the savoury menu. You look at our savoury menu and we have a hamburger, and it’s a burger. We have coq au vin, and it’s chicken cooked in wine. So what I wanted to do was have my menu read the exact same way, you know apple pie, ice cream … but then because it’s dessert and you can have fun with it and be playful, why not serve them something that’s a little different?”

That’s what makes Farzam’s work stand out – he makes things a little different, and people seem to like it. So much so, that some people have started calling him a boy genius. That’s one title that Farzam doesn’t quite agree with.

“I find it funny,” he said. “We always laugh about it at the restaurant; I get made fun of a lot in the kitchen from the other cooks. I don’t know … it’s nice that people think of me that way, but honestly I’m just doing what I feel like doing.”

Great feature on this up-and-coming pastry chef! Such a humble talent – his personality comes across well and I’m absolutely dying to try his desserts! Thanks for this write-up!